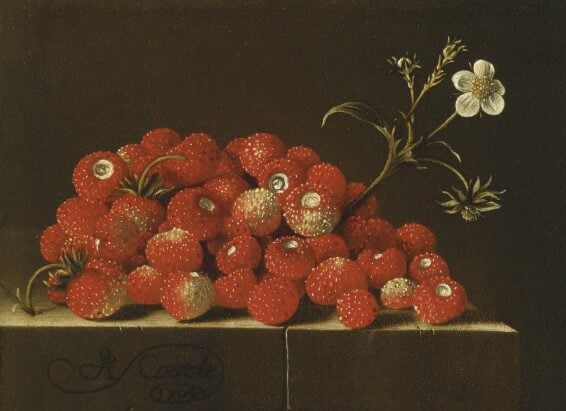 There are very few who dislike strawberries. I love everything about them, from texture, to smell, and taste. Painters also love the way they look, red and tiny they make the perfect object to study for still lifes. Enjoy the feast!

Here you can read the story of Katsushika Hokusai’s famous The Great Wave in greater detail!

Would you believe that this work was painted by Marc Chagall? He is best known for his dreamy and surreal visions of childhood.

Lucian Freud painted this life-size strawberry still life at the height of his fascination with the Old Masters. Indeed, he was so passionate that the then-director of the National Gallery, Neil MacGregor, granted him 24/7 access so that he could enjoy the peace and quiet with his easel after midnight. This work was painted as a gift to Ann Rothermere who was Freud’s patron and close friend. So close that Rothermere’s lover, Ian Fleming, was jealous, but then they married in 1952.

Zinaida Serebriakova was one of the very first women artists with academic accomplishments in Russia. Read here the story of this brilliant artist and her works.

Felix Vallotton was the main artist representing Les Nabis, a group of French artists active in Paris in the years 1888-1900.

From the 1900s, Pierre- Auguste Renoir lived in the Midi region in Southern France, in Cagnes-sur-Mer, where he built a house in 1908. His failing health constrained him to a chair but he didn’t stop painting, focusing on small format canvases of still lifes.

During the summer of 1882, Edouard Manet lived in Rueil, near Paris, in a house with a garden from which he painted many views. He sadly had to limit himself, ill and old he managed to paint mostly small-scale studies of objects.

Adriaen Coorte is known for the most beautiful renderings of fruit and vegetables in art history! You can recognize his still lifes through his distinctive style painted in miniature format, depicting delicious looking food on a ledge against a dark and clear background. Very poetic, isn’t it?

Louise Moillon was a French still-life painter in France whose specialty was the detailed and realistic rendering of fruit. She painted this marvelous painting when she was only 20 years old!