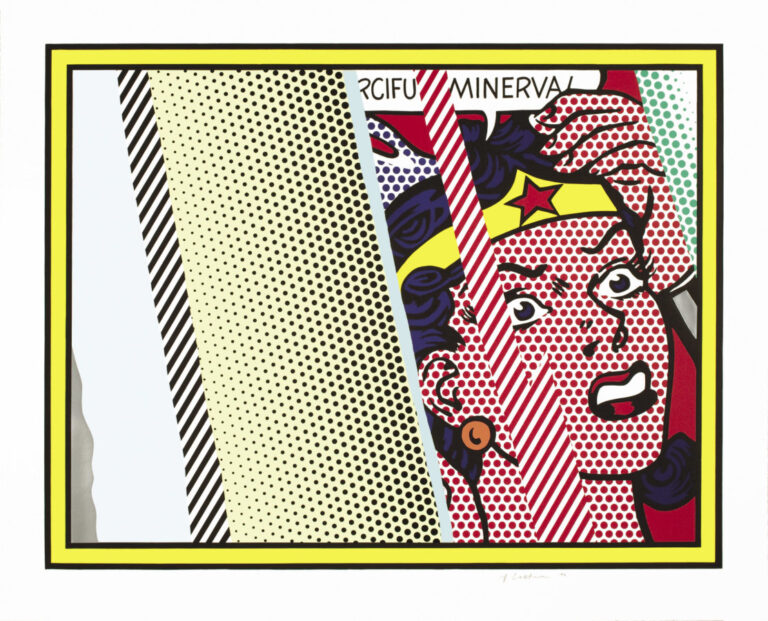 "Everyone knows me for comics and dots" Lichtenstein once said to Gianni Mercurio, the curator of Roy Lichtenstein Multiple Visions.

For sure Roy Lichtenstein is known as one of the most important figures in 20th century art and a Pop Art icon, but in this exhibition we discover an artist that explored along his entire career, beyond the canvas. Realizing sculptures, large size prints and even tapestries, using innovative techniques and materials, his practice became a form of artistic expression and an extension of his aesthetic vision.

The exhibition is organized in a thematic itinerary, highlighting Lichtenstein's evolution in work compared to the mechanical reproducibility of the work of art, but illustrating at the same time his various formal interpretations and representations regarding the subjects treated.

The exhibition begins with Roy Lichtenstein's early works, in which he perfected the techniques of traditional mechanical reproduction such as lithography. During this pre-Pop Art time, Lichtenstein reinterpreted American history and culture inspired by European artists such as Picasso, mixing modernism with an ironic style developing a pop reinterpretation.

With the "Mirrors" series, where the mirror does not reflect images, becoming an abstract object/non-object, and the "Still Life" series where the fundamental color took on a central role, Lichtenstein took objects of daily use and transformed them into signs that he placed into spaces with intentional superficiality and simplification. Lichtenstein's search for new mediums of reproduction translates into various printing techniques which included lithography, xylography and silk-screen printing of large dimensions.

Besides the printed dots, comics are a recognizable element of Lichtenstein's art, but he used them as a source of inspiration and of materials for his works only for a few years. The narrative power of the frames served to impact him with a much more powerful and complex perception of the image, not in the subject or the action.

Under this statement, Lichtenstein took the female figure, which was portrayed in line with the stereotypes of the social and cultural context of that period, as the only theme in his works between 1994 and 1995. With the series of nudes he placed women in an intimate sphere, among themselves, sensual women, who have lost the melancholic aura and replaced romanticism with narcissism.

Lichtenstein experimented with the theme of landscapes in different series, innovating with new materials in their reproduction like the Rowlux, a lenticular plastic sheet which suggested the idea of movement to the observer who walked around it.

He realized the first Landscapes series in 1964 together with his last figurative comics, then in 1985 with an enriched and evolved chromatic repertory, Lichtenstein included brushstrokes of many different colors, achieving impressionist gestural expressiveness. This abstraction came up again in 1996, in the last landscape series the artist realized. Inspired by Edgar Degas' pastel landscapes, he created a rarefied atmosphere of oriental landscape. The brushstrokes he created in 1965 by freezing the symbol and gesture of painting became real and tangible with bronze and wooden sculptures that Lichtenstein realized in the 1980s.