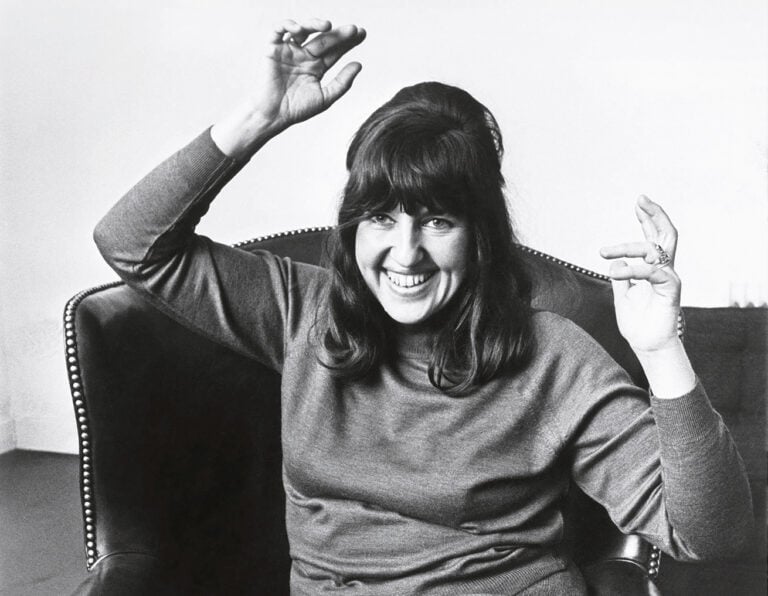 Rosalyn Drexler at her publisher’s office, circa 1960. Artist’s website. Detail.

Rosalyn Drexler is an American artist born in the Bronx, New York, in 1926. She attended the High School of Music and Art in New York City before marrying American painter, Sherman Drexler. She began making sculptures in the 1950s and later explored painting and Pop Art. Although Drexler is best known for her artwork, she had a successful career as a novelist, Obie Award-winning playwright, and screenwriter. She was once even a former professional wrestler in the 1950s and known as “Rosa Carlo, the Mexican Spitfire.”

Drexler is one of the many overlooked women artists who contributed to the Pop Art movement emerging in America and Britain during the mid-1950s. As the movement grew in popularity by the 1960s, artists were inspired by the rise of consumerism and mass media, portraying images and icons from popular culture and advertising such as comics, soup cans, and celebrities.

Drexler used scenes from movie posters, magazines, and newspapers as inspiration for her Pop Art. She would enlarge copies of such material, directly collaging and painting over them using vibrant colors. Characterized by noir aesthetics, the figures in Drexler’s artwork are often placed in isolation against flat, monochromatic backgrounds.

Pop Art is regarded as a male-dominated art movement, as pioneering artists like Andy Warhol and Roy Lichtenstein have overshadowed women artists like Drexler. It was difficult for women artists to be taken seriously in the world of Pop due to its inherent sexist imagery, taken from the rise of increasingly sexualized images of women seen in post-war advertising. Drexler’s artwork can be viewed in the context of the Women’s Liberation Movement surfacing in the 1960s and 1970s, as she uses her work to directly challenge sexist representations of women.

Her painting Self-Portrait (1964) was first shown, in 1964, at the First International Girlie Exhibit in New York that celebrated Pop Art’s portrayal of the “pin-up as an American symbol.” Drexler and fellow artist, Marjorie Strider, were the only women artists included in the exhibition. This was not surprising, as pin-up girls were a common feature in the work of male Pop artists, who took inspiration from the new sexual freedoms of the 1960s and presented the female body as just another commodity.

Drexler’s Self-Portrait subverts misogynistic imagery of women in magazines and popular culture with her highly satirical depiction of a provocative pin-up model, wearing black garters and stockings. The pin-up’s blue skin makes her look corpse-like, creating an unsettling image. The flat, red background forces the viewer to look at the pin-up in isolation; her captivating outward stare seems tainted with a feeling of sadness or anxiety. The pin-up is posing awkwardly and appears to be tightly confined within the frame, reflecting the idea that she is trapped in the male gaze. Although the real identity of the pin-up in the image is unclear, by claiming that it is a self-portrait, Drexler subtly promotes her own sexual subjectivity, directly challenging the typical objectification of women’s bodies by male Pop artists.

Other paintings like Marilyn Pursued by Death (1963) references underlying feminist messages. Drexler portrays Hollywood actress, Marilyn Monroe, hurriedly walking out of the picture frame, followed by the paparazzi. The figures overlap as they are depicted against a black background and outlined in red, suggestive of danger. Whereas Andy Warhol and Richard Hamilton idolized Marilyn as a sex symbol and glamour icon in their paintings, Drexler uses the scene to denote darker themes of obsession and desire, portraying Marilyn as a symbol of media victimization.

Much of Drexler’s artwork conveys a narrative between a man and a woman, exemplifying imbalanced power relations within relationships. For instance, Put It This Way (1963) raises awareness of male violence towards women, capturing the moment after the slap to the woman’s face as she falls to the ground. Like other pieces, the characters stand out against a vivid blue background, drawing attention to the violent act unfolding on the canvas.

In contrast, Self-Defense (1963) depicts a moment of strength, with a woman holding a gun as she pins down her attacker, clawing his face with her nails. Other interpretations of victory are evident in works such as Lost Match (1962), which evokes female empowerment through the image of two women wrestlers; the referee holds up the winner’s arm as she stands over the body of her opponent. Clearly, Drexler’s experiences as a professional wrestler greatly influenced her art. She represented a different side of women to what was portrayed in consumer culture and mass media, showing them as strong and powerful, rather than passive, sexual objects.

Women artists like Drexler have, until recently, been neglected from feminist art history due to Pop Art’s reputation of being synonymous with the objectification of women. Although the 1970s marked the rise of feminism and the emergence of the feminist art movement, Drexler was already engaging with issues that were integral to future feminist discourse such as female sexuality and violence towards women. Her artwork deserves to be recognized and celebrated for overturning idealizations of women in popular culture– redefining Pop Art and placing it in a feminist context.

Olivia Richardson is a History of Art graduate from the University of York. She has a keen interest in writing about the lives of forgotten women in history, with a particular focus on female artists.