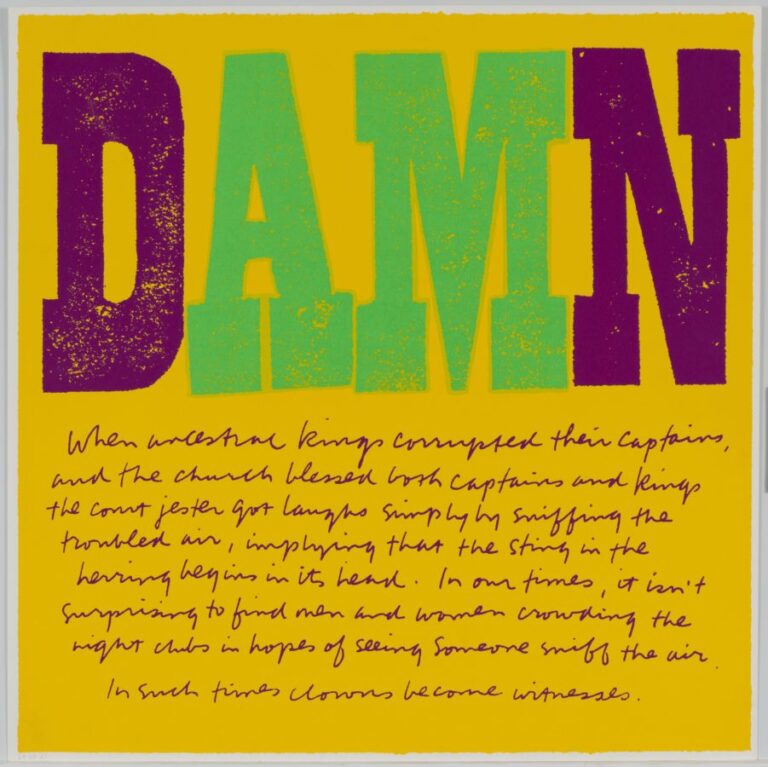 Corita Kent was an artist, an educator, and a Roman Catholic nun. She created bold, colourful pop art posters to confront social injustice.

Poverty, racism and war were all the target of Kent’s exuberant artwork. She felt her liberal ideas were fundamentally part of the Christian message. However her religion demanded a vow of obedience and her church superiors denounced her work. They took particular exception to a Christmas card called the juiciest tomato of all (1964) in which Kent likens the Virgin Mary to a luscious tomato. They called it ‘scandalous’ and this on-going rift eventually forced her to leave her religious order.

Aged 50 Kent left the nunnery and had to start afresh. She couldn’t drive, she couldn’t cook and had never lived outside of the schedule of religious life. However for the last 18 years of her life, she produced vast amounts of art. She died aged 67 in 1986, leaving her copyrights and unsold works to the Sisters of the Immaculate Heart of Mary College Community.

Born Frances Kent in November 1918, the fifth of total six children, her strongly Catholic family moved from Iowa to Hollywood in 1923. At the age of 18 she entered the Sisters of the Immaculate Heart of Mary order of nuns. From her school days her artistic talent had been obvious. Encouraged by her fellow sisters, she trained as an art teacher and went on to work in the order’s college, well known for its avant-garde views.

A quiet and private person, Kent wore a full nun’s habit, complete with veil and wimple. This monochrome black and white vestment was in stark contrast to the vibrancy of her colour drenched posters. The energy, enthusiasm and hopefulness of her work drew people in and touched their soul. Dr. Ray Smith, director of The Corita Art Centre said:

I’ve never seen an artist that people have connected to so really intensely and enthusiastically.

Her screens, which could be copied and widely reproduced hark all the way back to the Russian agitprop posters of Mayakovsky. And even today her influence can be seen in the work of Shepard Fairey. His We The People posters were made downloadable as a resource for political protest. A century after her birth, it is clear that Kent was a Pop art pioneer in her own right, a driven experimental artist with something to say.

The joy in her work was her gift to a good grey world. Catholics needed joy, joy, joy. Corita had it in abundance, and she gave it.

Today, we are celebrating the LGBTQ+ community by remembering Keith Haring, a brilliant artist whose vigorous and thoughtful works have inspired...