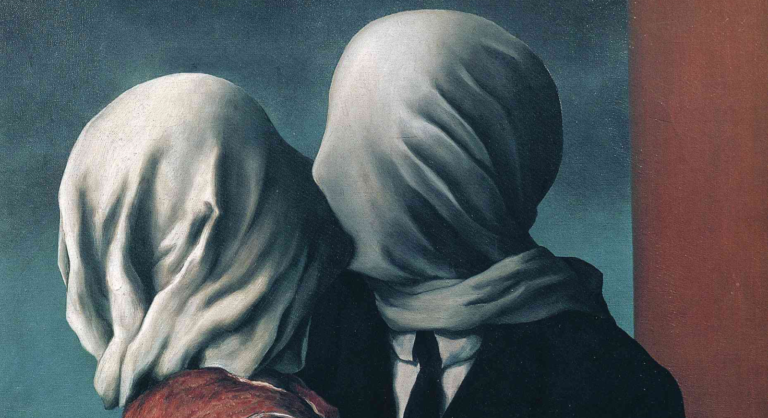 Now, while we are all being asked to practice social distancing, you have probably been bombarded with the paintings of lovers by René Magritte. Magritte's surreal style is unmistakable, his wit is well-known but his depictions of love and lovers are quite disturbing. These beautiful (and haunting) images of René Magritte's love are perfect for today's reality but do you know what Magritte really wanted to express in them? Are Magritte’s Lovers a sign of our time?

There are four variations of The Lovers that Magritte painted in 1928. We recognize this kind of close–up kiss from the movies. But in the two most well-known versions of the paintings there is one mysterious element - the faces shrouded in cloth.

The Surrealists were highly interested in masks, disguises and what lies beneath the surface. The melodramatic scenes may also relate to the graphic illustrations that accompanied pulp fiction and thriller stories. Magritte was fascinated by Fantômas, the shadowy hero of a thriller series of novels and films whose identity remained secret because his face was hidden under a cloth or stocking.

But, there is another, much darker interpretation. When René Magritte was thirteen years old, his mother committed suicide and her body was found in the river Sambre, supposedly with her nightgown around her face. As he said, he never found out "whether she had covered her eyes with it so as not to see the death she had chosen, or whether she had been veiled in that way by the swirling currents", but it must have been a traumatic event in Magritte's life.

But, let's move on to the paintings themselves.

In The Lovers I, a man and a woman press their faces together in a fond gesture, almost as if they were posing for a family portrait. It could be a chilled-out, Instagram-like holiday snapshot, with a lovely forest and sea in the background. Only, there is a cloth that tugs back against their faces and curls back over their shoulders like ropes. Due to these elements, this spontaneous intimacy becomes a spectacle of alienation, suffocation, even death. The lovers are unable to truly communicate or touch. The cloth keeps the two figures forever apart.

The second version of The Lovers is very similar, but more intimate and disturbing than its partner – in this version of the story, the man and woman, dressed identically as they were in the original, lean in for a loving embrace – a kiss. But their attempt is again impossible because of the cloths. Unlike the pastoral scene of the previous painting, a much more abstract background is given here.

Here we may have a window into hidden aspects of relationships that even the participants themselves are blind to. When the two individuals in the pieces embrace or kiss, they cannot see the other in a literal sense: both of their heads are fully covered by a (presumably) opaque hood. We always have trouble deciphering the true intentions, feelings, and secret fantasies of those we love. No matter how much you pose, no matter how much you actually love each other, no matter how picturesque the setting is, there is always a distance, no matter how intimate you are.

The two other versions of the Lovers are much lesser known, because they are in private collections. Also, without the cloth they don't seem to have such an impact on the viewer, but they are also very thought-provoking in their own right. We may presume that the couple in this painting is the same as in the first paintings. The woman is wearing the same dress and the angle of the man’s face is similar to how it was in The Lovers I. However, we can't tell for sure whether or not it is the same man because his body is missing. What does it mean? That his head is with this woman but his body and therefore his heart is with another? Is it a scene of betrayal, or simply a scene depicting the impossibility of two human beings being together? Even though the lovers look more fulfilled, as they touch each other or kiss without any barriers could they be really close, without the man's body?

René Magritte described his paintings saying, "My painting is visible images which conceal nothing; they evoke mystery and, indeed, when one sees one of my pictures, one asks oneself this simple question, 'What does that mean?' It does not mean anything, because mystery means nothing, it is unknowable."

So, as is very often the case with art, the masterpieces tend to show us whatever we would like to see in them.