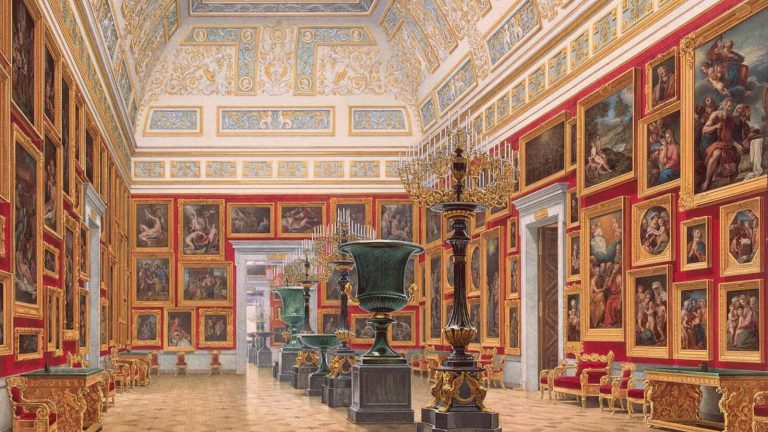 Art Guide to Quarantine by DailyArt

Armchair traveling, online art viewing, and virtual museum visits are all the rage these days. In this article, you can do those three things at once by viewing portrayals of museums in art. It will probably come as no surprise that artists have sometimes chosen to depict museums in their works. These paintings, watercolors, and prints represent three of the world’s biggest and most important museums – the Louvre, the British Museum, and the Hermitage. Bon voyage!

The Louvre, one of the world’s best-loved art museums, is home to countless masterpieces, including the sensationally famous Mona Lisa. Originally a palace of the French kings, the Louvre became a public museum for the first time as a result of the French Revolution. During Napoleon’s subsequent reign, the Louvre swelled with treasures plundered from all across Europe. Some, but not all, have since returned home.

Gallery of the Louvre was the intended masterpiece of American artist Samuel F. B. Morse. He hoped that this painting would assure him a great reputation and lengthy client list. His own curated selection from the Louvre’s collection appears in such painstaking detail that it’s easy to recognize individual paintings. Unfortunately for Morse, Gallery of the Louvre was not well received, and it didn’t earn him the fame or fortune he had hoped for. Disheartened, he abandoned painting for his other passion– inventing. Therefore, it’s thanks to this painting’s supposed mediocrity that the world has benefitted from Morse’s greatest achievements – the telegraph and Morse Code.

A few decades earlier, French artist Hubert Robert (1733-1808) had envisaged a very different Louvre. Imaginary View of the Grand Gallery of the Louvre in Ruins depicts Robert’s vision of the then-new museum abandoned in the future. The ongoing cultural devastation wrought by the French Revolution undoubtedly provided the inspiration. Robert liked to depict both architecture and ruins, making this the perfect subject for him. An early Louvre curator, he was partially responsible for turning the palace into a museum, and he painted non-apocalyptic versions of it as well.

The British Museum is more than just an art museum. It contains a little bit of everything that you could possibly want concerning human history and culture – from ancient Egyptian mummies, to the Elgin Marbles, to the Anglo-Saxon masterworks of the Sutton Hoo ship burial. Stocked by centuries of British colonialism, it factors heavily into modern-day debates and requests for repatriation.

One of the British Museum‘s best-known offerings isn’t an artwork at all. Rather, it is the Rosetta Stone, a trilingual inscription that offered the key to a modern understanding of ancient Egyptian hieroglyphs. It has proved itself to be one of the most important slabs of stone ever! In the print shown above, from the Illustrated London News, a crowd of scholars gathers around the Rosetta Stone display to examine it and discuss its contents. A large statue of Egyptian falcon deity Horus seems to stand guard in the background. By the time of this 1874 image, French scholar Jean-François Champollion (1790-1832) had completed his groundbreaking decipherment using the Rosetta Stone inscriptions about a half century ago.

From the British Museum, Winter depicts the institution’s iconic Greek Revival exterior, designed by Sir Robert Smirke in 1823. A product of the Enlightenment – the museum opened in 1759 and considers itself to be the world’s first national public museum – it has an imposing, classical exterior to reflect all the classical knowledge contained inside. This painting, by Danish treasure Vilhelm Hammershøi, shows the façade from a side view, atmospherically rendering it in a dreary winter’s day in London – the perfect weather for a museum visit.

The Hermitage (State Hermitage Museum) is one of the world’s grandest museums in both its collections and its architecture. Contained in several opulent buildings, the museum consists of former Russian Imperial palaces, notably the Great Hermitage, New Hermitage (pictured above and below), Small Hermitage, and the Winter Palace. Russian Empress Catherine the Great (1729-1796) founded the museum through her insatiable appetite for art. She often purchased entire collections in one go instead of building them up in pieces like lesser mortals.

German-born artist Edward Petrovich Hau (1807-c.1888) spent much of his career in Russia, where he depicted numerous imperial residences. He made an album’s worth of watercolors showing various galleries in the Hermitage. The combination of the artworks on view and the stunning displays of 19th-century imperial grandeur makes the Hermitage so fascinating, and Hau’s exquisite watercolors make it easy to enjoy both from afar. In addition to the Italian and Flemish artworks shown here, the Hermitage also owns antiquities, decorative arts, arms and armor, a variety of European artworks, masterpieces of Russian art and culture, and more.

If armchair travelling through artwork is your kind of thing, you can also visit luxurious palace interiors in the same way. Some of them are museums as well. Additionally, we have tours of London and Paris in artwork, as well as a world tour courtesy of painter Frederic Edwin Church.