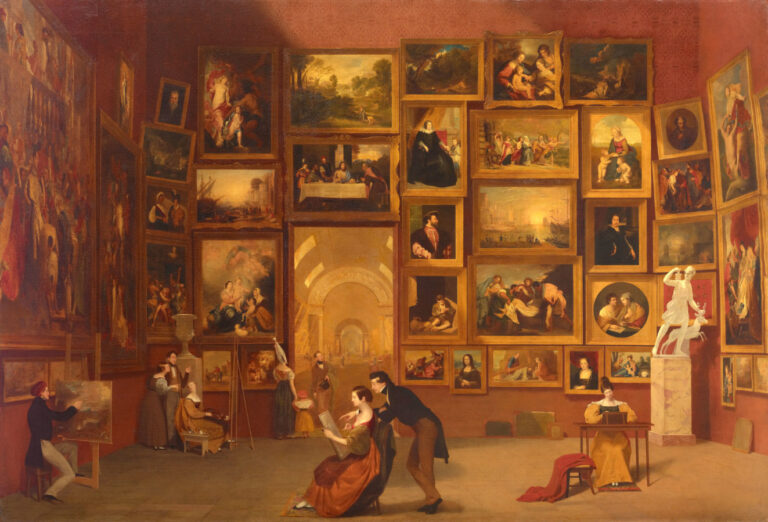 Samuel F. B. Morse was an American painter who graduated from Yale University and went on to the Royal Academy in England where he studied painting. Yes, it was him who invented the telegraph and Morse code, no small feats, which allowed for the laying of the Transatlantic cable in 1858 and greatly affected the outcomes of both the Mexican-American and Civil War. Disappointed with his success as a painter, Morse became an inventor. But previously Morse painted this painting. From 1830-1832 Morse traveled to Europe to further improve his painting skills stopping in Paris where he painted “The Gallery of the Louvre”; this large 6’ x 9’ oil on canvas painting included miniature paintings of 38 of the Louvre’s most famous paintings including works by Veronese, Tintoretto, Caravaggio, Titian, Jouvenet, Murillo, Poussin, Vernet, and Reni. For this canvas, Morse imaginatively ’reinstalled’ them in one of the museum’s grandest spaces, the Salon Carré. [caption id="attachment_4510" align="aligncenter" width="620"] 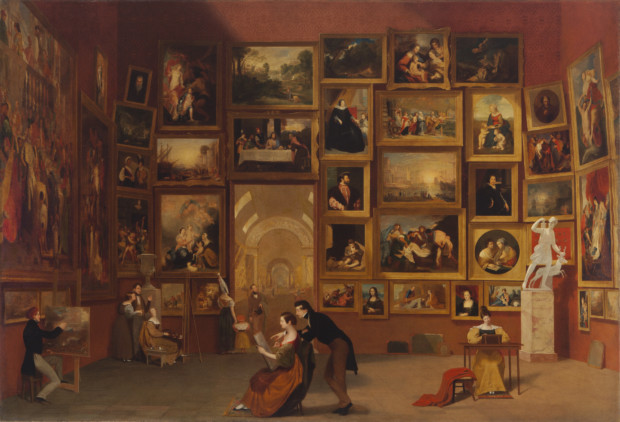 Samuel F. B. Morse, Gallery of the Louvre, 1831–33, Oil on canvas, 73 3/4 x 108 in. (187.3 x 274.3 cm) Terra Foundation for American Art, Daniel J. Terra Collection 1992.5; on view in The New Britain Museum of American Art from June 17, 2017[/caption] Morse included several interesting figures in "The Gallery of the Louvre" including himself in the center looking over his daughter Susan’s shoulder as she paints. Also we see a woman painting alone at the easel, this is presumably his late wife Lucretia Pickering, and the writer James Fennimore Cooper stands in the corner gesturing to his daughter. Richard Habersham, a portraitist and former roommate of Morse is painting a seascape in the forefront, and emerging from the long hall is Horatio Greenough, a sculptor whom Morse met in Paris and who went on to create a colossal marble monument to George Washington. We also see a woman and child with their backs to us who appear to be from Brittany, this serves as a reminder that the Louvre was open to people from all walks of life. He completed the painting upon his return to America with the intention of charging 25 cents per viewing of this remarkable painting. At the time in the U.S., there were no museums to display Italian or French Renaissance masterpieces so his intention was to educate the American public. The New York Mirror, in 1883, wrote after viewing the painting: “Here shine in one grand constellation, the brilliant effusions of these great names destined to be live as long as the art of painting exists”. However the viewing public was not as enthusiastic about the painting and rejected it. The painting eventually sold for half of what he was asking. The painting belongs to the Terra Foundation for American Art but it will be on view in The New Britain Museum of American Art from June 17, 2017 until October 15, 2017. How many famous paintings from Museé du Louvre can you recognize here? [caption id="attachment_4512" align="aligncenter" width="620"]