Travel to the Heart of the Andes with Frederic Edwin Church 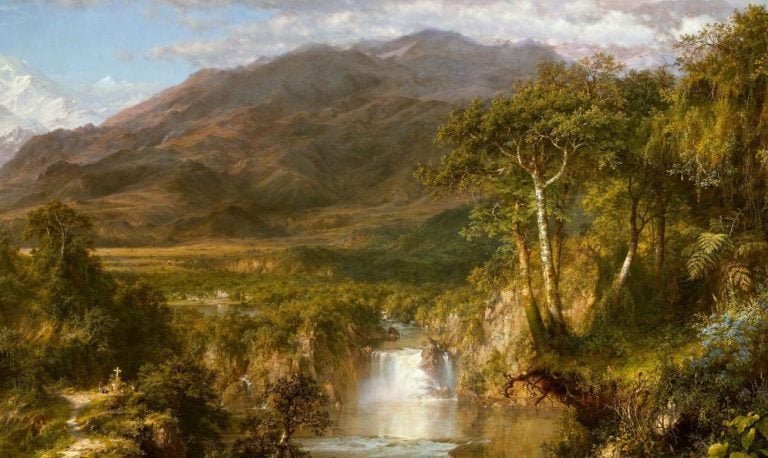 Heart of the Andes is one truly impressive landscape painting. Frederic Edwin Church’s crowning achievement depicts the scenery he saw during his two visits to South America. However, one of the painting’s most important features doesn’t appear on the canvas at all – the pioneering scientist who was the inspiration behind it.

Frederic Edwin Church (1826-1900) was among the most celebrated members of American landscape painting movement the Hudson River School. As the name suggests, the school is most closely associated with American scenery, but Church is better known for his paintings of foreign settings. He travelled all over the world, his journeys were partly inspired by the works of Alexander von Humboldt.

Hero to Enlightenment-era intellectuals everywhere, Alexander von Humboldt (1769-1859) was a Prussian explorer, natural scientist, and writer. Think of him as a sort of grandfather to most disciplines of modern natural science. Humboldt’s books, notably the five-volume Cosmos, were best sellers in many languages. Among his numerous contributions to natural science, he was the first person to realize that all the world’s ecosystems are interconnected.

If his name sounds familiar, that’s because he’s had so many geographic features named for him. Humboldt wasn’t just any old scientist, however. He was brilliant, collaborative, a fervent abolitionist, and a supporter of Indigenous rights. Humboldt took an expedition through South America in 1799-1804, a voyage that later inspired his admirer Church’s own pair of trips there.

Humboldt was keenly interested in the kinship between art and science. In volume two of Cosmos (1849), he wrote specifically about landscape painting and gave advice to the current generation of artists, such as:

To apprehend these characteristics [of a region’s landscape], and to reproduce them visibly, is the province of landscape painting; while it is permitted to the artist, by analyzing the various groups, to resolve beneath his touch the great enchantment of nature — if I may venture on so metaphorical an expression — as the written words of men are resolved into a few simple characters.

He suggested that a good landscape painter should make an effort to deeply understand the natural world. He also thought that more landscape painters should visit and depict South America. Frederic Church took Humboldt’s advice on every level. Although the two never met or even corresponded, art historian Eleanor Jones Harvey has characterized Humboldt as Church’s “distant mentor”.

In particular, Heart of the Andes expresses Humboldt’s ideas about the “unity of nature” in visual form. In doing so, it makes a very persuasive claim for Church as exactly the kind of ideal landscape painter Humboldt called for in his writings. For this reason, Church became known as “the American Humboldt”, a title that surely pleased him.

Heart of the Andes

Frederic Edwin Church painted Heart of the Andes after visiting Colombia and Ecuador in 1853 and 1857. He and his traveling companions used Humboldt’s writings as sorts of travel guides, often visiting the very same sites as Humboldt had. In a way, Heart of the Andes represents a visual record of Church’s experiences. He made copious sketches along the way, often annotating them with extensive observations. Many of these sketches now reside at the Cooper-Hewitt in New York. He then used this reference material to paint Heart of the Andes back in his New York studio. His full oil study for the work is still at his home, Olana.

Humboldt’s influence shines through in the meticulous detail found throughout the painting. Specialists can identify more than 100 species of South American plants in the painting because Church depicted them so faithfully. These impressive details, which stretch from the immediate foreground all the way into the distance without diminishing in clarity, stunned and even overwhelmed many viewers. Anybody who has ever seen the painting in person will understand this feeling. The effect in photographs can’t possibly compare.

Humboldt believed it necessary to understand all the minutia of the natural world in order to comprehend how it all fits together in the big picture. Heart of the Andes did this in visual form by weaving scores of tiny, carefully observed details into a vast-but-cohesive composition. It measures 66 1/8 x 120 3/16 inches, (168 x 302.9 cm) and took Church over a year to paint. Obviously, he had learned his lessons well from reading Humboldt.

Heart of the Andes as a Collage of Ecuador

Although Heart of the Andes gives the very convincing impression of depicting a single location, it actually represents at least five different bio-regions in the Ecuadorean Andes, from lush rain forest to the snow-capped peak of Mount Chimborazo. Colloquially referred to as Humboldt’s Mountain, Chimborazo was particularly significant to the great naturalist. The observations he made while climbing it contributed significantly to his theories. Chimborazo was also a focus of Church’s second trip to South America, where he sketched it from multiple viewpoints. Other areas of the painting represent different sites that Church visited nearby. The landscape in the middle distance, for example, is based on the countryside near Quito.

Church based the composition of Heart of the Andes on Humboldt’s 1805 Plant Geography Map. In that illustration, Humboldt recorded the flora he found on Chimborazo and Cotopaxi (another mountain in the Ecuadorean Andes) at various altitudes and cross-referenced this data with other mountain ranges across the world. The correlations he found thus formed the basis for his ideas about the unity of nature. In some ways, Heart of the Andes aspired to do the same thing by combining scenery from different climates into one painting. It shows the vast ecological diversity found at different altitudes of the same location. More than just a painting, Heart of the Andes is almost a visual expression of Humboldtian thought. Humboldt would have been proud.

Church painted Heart of the Andes partly as a tribute to Humboldt. He had planned to send the finished work to him in Berlin, but unfortunately, Humboldt died before it could reach him. Church was devastated.

Although Alexander von Humboldt may never have gotten to appreciate Heart of the Andes, plenty of other people did. From 1859-60, the painting appeared in a Great Picture exhibition, a type of early blockbuster involving a single artwork. Such an exhibition of Niagara Falls in 1857 had already put Church in the spotlight, but Heart of the Andes would make him even more famous.

Heart of the Andes had its public debut in New York City on April 27, 1859. The show opened at Lyrique Hall on Broadway but soon transferred to the Tenth Street Studio building, the same place where Church had painted it. Within three weeks, 12,000 people had seen it, often waiting in line for hours to do so. Furthermore, it was the single biggest art event of Civil War-era America.

A deep frame, designed to invoke a window, capitalized on the painting’s illusionism. (Even today, when the painting appears in a more traditional frame, the sense of it being a window onto the Andes persists.) Two of Church’s supporters wrote and sold guides to the painting, while many viewers brought opera glasses for optimal viewing of its details.

Although Heart of the Andes was undoubtedly popular, it garnered mixed reviews. Many people loved it, including American writers Washington Irving and Mark Twain. On the other hand, some critics and spectators found the details to be too overwhelming and the composition not harmonious enough. The painting’s excessive illusionism and relationship to popular (aka low-brow) panorama shows also received negative comments. Regardless, commentators recognized its connection to Humboldt.

Overall, Church had every reason to be pleased. He reached a new level of fame and respect, while the 25-cent admission price made him and his promotors a small fortune. Following its New York unveiling, Heart of the Andes went on a two-year-long tour that included seven other cities in America, plus London. It was a hit everywhere. London critics raved about it, comparing Church to Claude Lorrain, J.M.W. Turner, and the Pre-Raphaelites.

More than 30,000 people saw it in Boston, a record at that time. Scottish printmaker William Forrest made an engraving of it for sale by subscription. And on top of all this, a wealthy New York collector William T. Blodgett promised to buy Heart of the Andes for the huge sum of $10,000 before the tour even started. As a result of this success, a steady stream of private collectors commissioned South American scenery paintings from Church.

Heart of the Andes Today

Heart of the Andes eventually found its way to the Metropolitan Museum of Art, an institution that Church and Blodgett both helped to found. You can still see it there today.

In 2020, the Smithsonian American Art Museum hosted Alexander von Humboldt and the United States: Art, Nature and Culture exhibition. Works by Frederic Church were featured heavily in this major exhibition about Humboldt’s impact on American culture. Heart of the Andes, although key to the exhibition’s ideas, did not actually appear (it rarely leaves the Met). However, the curator Eleanor Jones Harvey narrated a great immersive video about the painting’s main features. Unfortunately, the exhibition closed early due to COVID-19.