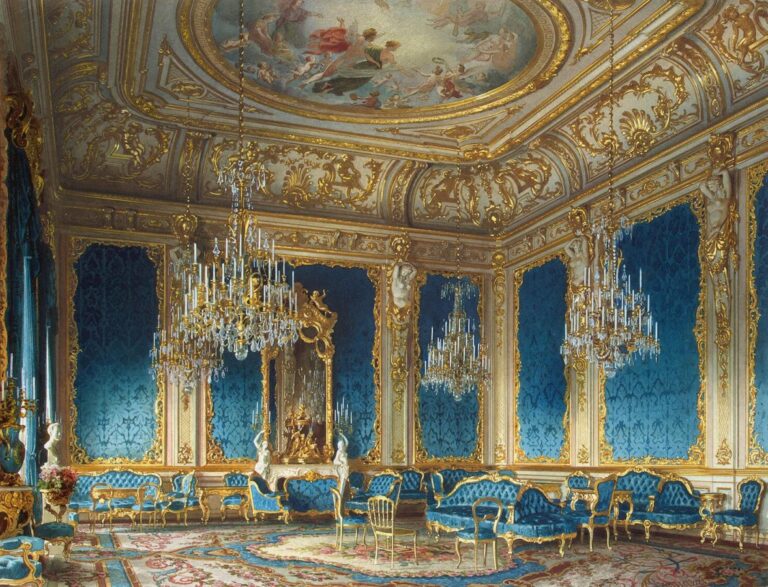 Painting of the Week: Giovanni Panini, Interior of a Picture Gallery with the Collection of Cardinal Silvio Valenti Gonzaga

The Quiet Life in Interiors of Vilhelm Hammershøi

The notion of painting natural landscapes has been prevalent since ancient times. It is an obvious choice, of course. What can compare with the beauty of nature? The inverse concept of depicting interior spaces, however, is a much more complex and intriguing phenomenon that is believed to have originated after the Industrial Revolution. How and why were these exquisite palace interiors shown in paintings?

Although many theories have been proposed as to the motivations behind such depictions, the meaning is rather unambiguous in the following paintings. These were no doubt meant to inspire awe and wonder. The only thing more impressive than these interiors is the artistic skill that was employed in painstakingly in capturing the minute architectural details.

Premazzi and the Legendary Home of Baron von Stieglitz

Luigi Premazzi was an exceptional Italian artist from the 19th century. He received formal training in Milan and became considerably well-known for his watercolor works depicting architectural subjects. This skill was put to expert use in his renderings of the incredible home of Russian banker and financier, Baron Alexander von Stieglitz. Among Premazzi’s exquisite works are various renderings of Stieglitz’s mansion. The precision and hyperrealism of these paintings are unbelievable, especially considering that they are painted in watercolor!

Premazzi died in Istanbul at the age of 77 after a long and successful career. Although very little is known about his personal life, Premazzi has left behind a great legacy of captivating artworks.

Maurice Lobre was a French painter who trained under celebrated orientalist, Jean-Léon Gérôme. He showed an early acumen for painting and his first exhibition at Salon was in 1882 at the age of 20. Although he painted both portraits and genre scenes, he was best known for his portrayal of interiors. He dedicated a large body of work to many sections of the Palace of Versailles including the King’s Library, Salon of Madame Adelaide and etc.

This famous painting is an atmospheric rendition of the interior of the Dauphin’s Salon. It is said that Lobre was able to convey the mood and the feeling of the palace interiors and that sentiment remains apparent here. The room is illuminated by the soft glow of the sunlight pouring through the tall French doors, inspiring an almost emotional reaction. Visible inside is the rich design of the classical French interior, with intricate molding on the ceiling. Busts adorn the sides of the room and the tall mirrors hint at large paintings and a fireplace on the other side of the room. Right outside this incredible room is a large balcony surrounded by wrought iron railings in vegetal patterns that are overlooking an undoubtedly immaculate and manicured garden.

Walter Gay was an American artist of the Gilded Age. His legacy is an extensive collection of opulent residences of the period, both in America and in Europe. He depicted lavish interiors, usually richly adorned with silk upholstery, intricate moldings, paneled walls, rich furniture, and priceless artworks! Among Gay’s fine works are The Boucher Room and The Fragonard Room from the New York residence of esteemed American industrialist and art collector Henry Clay Frick.

These rooms are 18th century style French salons that were named after the beloved Rococo painters, François Boucher and Jean-Honoré Fragonard and they naturally house the artworks of their namesakes. Gay’s impression of the Rococo artworks in both paintings is unmistakable!

Gay was an elderly man in his 70s when he received the commission from Frick’s daughter, Helen Clay Frick, and the works are now on display in the Frick Collection in Pittsburg, PA.

Ludwig Deutsch was a talented 19th-century Orientalist with many breathtaking interiors in his oeuvre. His contribution to the art world is noteworthy, as his subject matter as well as his careful attention to detail resulted in a fairly exclusive look into this period of the Near East.

The connoisseur in the painting below is shown in a beautiful room with carved marble panels, luxurious drapery, and rugs. He is surrounded by beautiful objects such as musical instruments, an inlaid chest, a brass ewer, and a porcelain vase, adding to the warmth and opulence of this painting. The connoisseur appears to be contemplating the next treasure to add to his carefully curated collection.

Despite the extraordinary talent, as well as the plethora of honors and awards, details about Deutsch’s life and his personal journey remain mostly elusive, as he did not maintain a personal journal or leave behind a partner or heirs.

Another artist with exceptional talent in rendering Russian palace interiors was the Baltic German artist, Edward Hau. Hau belonged to a family of artists. His father, Johannes Hau, was a painter from Northern Germany and his half-brother, Woldemar Hau, pursued an artistic career as well.

Hau attended the Dresden Academy of Fine Arts in 1830. He spent a large part of his life in Saint Petersburg, where he became a member of the Imperial Academy of Art. He was accomplished at portraiture, but the highlight of his career in Russia was his exceptional architectural paintings in watercolor. He painted several precise and detailed works of the Winter Palace, the Peterhof Palace, and other Royal residences. The exactness of his works was applied in the restoration efforts of the Great Gatchina Palace in Leningrad Oblast, Russia after its destruction during the Second World War.

After a long career in Russia, Hau moved to Estonia in 1880, where he spent his final years.

This painting is one of the most famous works of the 19th century German painter, Carl Blechen. It represents an important detour in his usual subject matter of Italian landscapes. It depicts the interior view of the beautiful greenhouse of Friedrich Wilhelm III of Prussia, located on the Pfaueninsel, or Peacock Island. Designed by one of Germany’s premier architects, Karl Friedrich Schinkel, this incredible structure was conceived to house Wilhelm III’s enviable collection of palms. Blechen has expertly captured the impressive tall ceilings, intricately carved pillars, and of course, abundant tropical flora. He depicted women dressed in exotic clothing comfortably lounging in the greenhouse, ostensibly unaware of the grand exotic tropical foliage enveloping them.

Unfortunately, this was among Blechen’s final works. Shortly after completing this incredible painting, the artist started to show signs of severe mental derangement and succumbed to his illness in 1836.