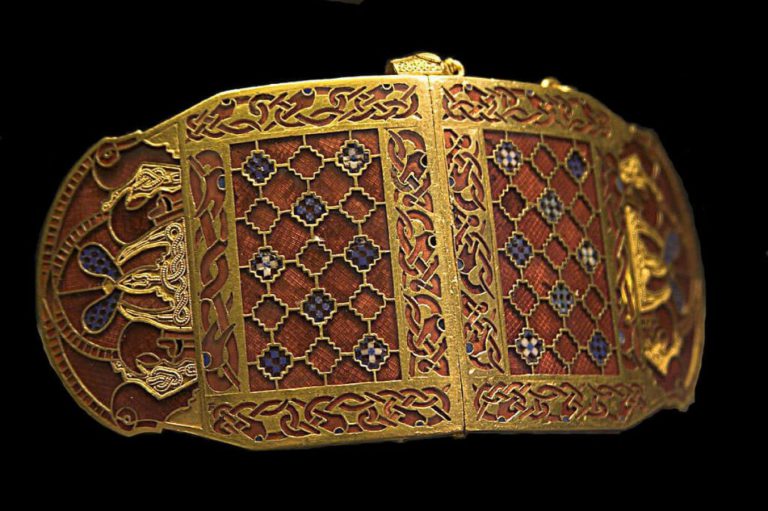 Thomas Becket: The Imagery of an Unexpected Saint

A Netflix production called The Dig (released January 29, 2021) is a fictionalized story about the 1939 discovery of the Sutton Hoo ship burial. It is based on John Preston’s novel of the same name. After watching the movie, you’re probably curious about the spectacular treasures found at Sutton Hoo. Their history is every bit as interesting as their discovery.

Sutton Hoo, in Suffolk, East Anglia, England, is an Anglo-Saxon burial site from the early 7th century CE. The Anglo-Saxons, from what’s now Germany and Scandinavia, came to England after the Roman Empire’s fall and ruled there starting around 500 CE. Although Sutton Hoo’s numerous burial mounds had occasionally been the targets of grave robbers, none were properly excavated until Edith Pretty (1883-1942), the site’s owner, hired self-taught archeologist Basil Brown (1888-1977) for the job.

Watch a short video clip of the excavation:

Sutton Hoo is famous for what Brown and his colleagues discovered inside the largest mound – a previously-undisturbed ship burial from about 625 CE, filled with luxurious objects. A ship burial is exactly what it sounds like. The deceased was buried in a ship dragged over from the nearby river, presumably meant to sail him to the afterlife. The medieval epic Beowulf describes a similar funeral. Although the ship’s wooden hull decayed away over the centuries, its 90-foot-long (90 cm) impression clearly remained in the earth, along with its metal hardware.

The tomb’s inhabitant is unidentified, but his rich burial makes his high status pretty obvious. Due to highly acidic soil, his body has completely decayed, just like the ship. However, chemical soil tests prove it was once there, putting to rest suggestions of a symbolic burial that never actually included a body. Scholars have proposed King Raedwald, an early-7th century ruler of East Anglia, as the original occupant. Raedwald died in 625 CE, and coins found inside the tomb date it to around that time. Sutton Hoo is not the only Anglo-Saxon hoard ever found on British soil, but it’s by far the most significant.

Sutton Hoo provides one of the richest sources of archeological evidence for this period of the history of England’s development. The discovery in 1939 changed our understanding of some of the first chapters of English history and a time seen as backwards was illuminated as cultured and sophisticated.

The discovery at Sutton Hoo revolutionized our knowledge of the Anglo-Saxons during the so-called “Dark Ages”. The items in the grave proved them to be significantly more sophisticated and worldly than previously realized. The skill and culture necessary to create the masterpieces of the Sutton Hoo ship burial went far beyond anything scholars had otherwise attributed to them. A host of imported objects, like coins from Merovingian France, garnets from Sri Lanka, and silverware from the Byzantine Empire, also testify to their surprisingly large trading networks.

The tomb is also a sort of time capsule from the period when the Anglo-Saxons were converting from paganism to Christianity. The idea of burying somebody in a ship filled with treasures is unquestionably pagan, but the tomb contains Christian-related objects as well.

Sutton Hoo is most celebrated for the luxurious objects found there. Although nothing made of organic material remains, a treasure trove of rich metalwork survives beautifully. The greatest finds include a helmet with a human face, a sword and its fittings, an intricate gold belt buckle, a purse lid with bold animal motifs, and a pair of gold and garnet shoulder clasps.

An iron and tinned-copper helmet is the most iconic of the Sutton Hoo treasures. With metal eyebrows, nose, and mustache, it gives the uncanny impression of looking into an ancient face. Although the helmet’s corroded fragments required meticulous reassembly, it still represents one of the four best-preserved Anglo-Saxon helmets ever discovered. The helmet appears above in its second and current reconstruction. Everything that looks smooth and matte is modern; only the textured parts are original.

The helmet was covered in little raised (repoussé) scenes of human and animal figures in action. The style of both the helmet and this decoration link it to ancient Roman precedents. A replica on display beside the original shows what it may have looked like intact. Additional animal motifs abound, such as snakes creating a ridge over the top of the head. The facial features actually form the body, tail, and wings of a flying beast when you look at them all together.

While iron objects like the helmet have corroded badly, the Sutton Hoo ship burial’s many gold objects are still as bright and shiny as ever. These masterworks reflect the intricate ornament and detail of Anglo-Saxon metalworking. Their most characteristic feature is interlace – ribbons of twisting and twining decoration. A black composite metal called niello creates contrasting details and dimension.

Look closely at pieces like the gold buckle above, and you’ll soon realize that the interlace actually forms stylized animal bodies, complete with little animal heads biting their own tails or each other’s bodies. Such zoomorphic interlace may look familiar from medieval manuscripts like The Book of Kells. In fact, many scholars believe that the tradition of Insular manuscript illumination stems from earlier metalworking styles like that seen in the Sutton Hoo artifacts.

Animals are common features of Anglo-Saxon art of this period, which is sometimes called Style II or “Animal Style” for this very reason. The creatures depicted such as boars, eagles, and snakes must have had now-lost symbolic significance.

The Sutton Hoo ship burial treasures aren’t simply gold and silver. These objects are brightly colored thanks to abundant garnets and colored glass. Anglo-Saxon craftsmen using a technique called cloisonné, in which little cells of gold enclose shaped gemstones, enamels, or glass. In the Sutton Hoo objects, stamped gold foil backings underneath each garnet create subtle textural effects when seen through the translucent garnets. In objects such as the purse lid and shoulder clasps (both shown further up this page), blue and white glass contrasts the red garnets. These are examples of millefiori, for which craftsmen fused together bundles of colored glass rods, then sliced them like a roll of cookies to create tiny checkerboard patterns.

Visiting Sutton Hoo and Its Treasures

Thanks to Edith Pretty’s donation, all of the treasures found in the Sutton Hoo ship burial now live at the British Museum in London. At Sutton Hoo itself, run by the National Trust, you can see the archeological site, reconstructions of the mounds and burials, and reproductions of the treasures. There’s even a recent reconstruction of what the ship itself might have looked like.

If you want to learn more about this subject, read my thoughts on The Dig here.

Medieval Europeans believed that the movements of the sun, moon, stars, and planets directly affected their lives on earth. They practiced what we...