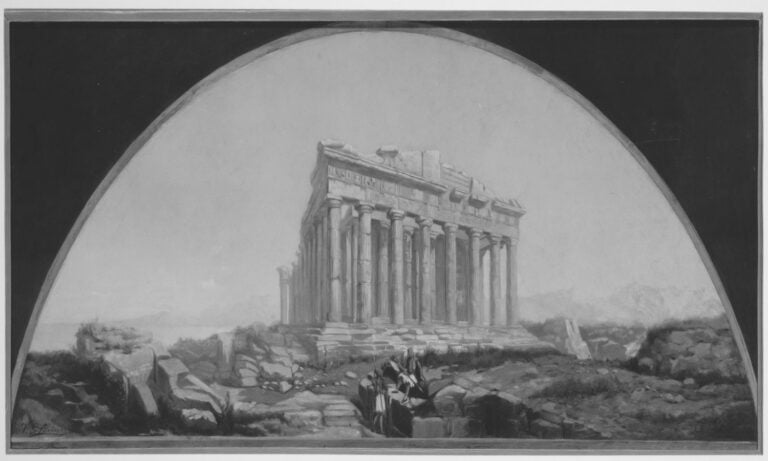 Mythology is a pretty broad topic in Ancient Greek history. And even more so is the use of mythological figures in ancient Greek art. From pottery to sculptures, we can see that the ancient Greeks were inspired by their own mythological tales. This is especially true in the Parthenon Mythology.

Within this topic of art and mythology, there are a couple of different schools of thought. The research is widespread; scholars have asserted their ideas on how and why the ancient Greeks used imagery to make sense of the world around them.

Athens reached its peak of power and prosperity in the mid-5th century BCE. Scholars refer to this period as the city-state’s ‘Golden Age.’ Although it did not last terribly long, Athens’ Golden Age saw an increase in, and not limited to, financial, artistic, scientific, and military excellence. This period correlates with the years following the Persian Wars.

Athens was destroyed and rebuilt more than once during the span of the Persian Wars. In an effort to rebuild Greek nationalism after the Persians took control and reigned over several Greek city-states; the Athenians, led by Pericles, decided to build a temple on the ancient Acropolis. The building was part of a larger plan to build over the sites lost in battle.

Although the exact use of the Parthenon is debated by scholars, it is generally agreed upon that it was either a treasury for the Delian League or a temple to the goddess Athena. Its construction took less than a decade; again, a shining example of Athens’ prowess during their Golden Age. Author, Andrew Stewart, alikens the Athenians’ architectural hubris to Icarus flying too close to the sun; they were trying to please the gods by rebuilding after their victory over the Persians.

Architecturally, the Parthenon’s design was in the octastyle peripteral Doric (and Ionic) style with sculpted metopes on all four sides. Within all of my articles about ancient Greece, there is a unifying theme of the ancient Greeks and the ‘other.’ This dichotomy comes across even in the style choice of the architects. They combined different versions of styles to compliment each other as well as conflict with each other. The stylistic choices also served to remind the Athenians who they were in comparison to anyone else.

The artists created sculptural reliefs so that they could help the Athenian audience identify themselves against the Persians who attacked them. Familiar imagery of mythology helped the Athenian to make a connection in ‘good’ vs ‘bad,’ or ‘Athenian’ vs ‘barbarian.’ This method ultimately connected mythology to actual history and begs the question of history’s effects on art.

Amazonomachy, Centauromachy, and Gigantomachy are a few of the main themes of the Parthenon’s mythological-based sculptural reliefs. (The Greek word for war is ‘machia’: hence, Amazon-war, Centaur-war, etc). These themes are not singular to Athens; but as popular mythology, were almost commonplace in Athens and the Parthenon. Research from various scholars suggests a connection between commonplace mythological figures in relation to Athenian nationalism.

During a time when the Athenians wanted to show the rest of the world that they were strong, civilized, and heroic, the Parthenon’s sculptural reliefs helped their ideals along.

For more information: The Metropolitan Museum’s Heilbrunn Timeline of Art History is a great resource to learn more about the Parthenon and Ancient Greek history!