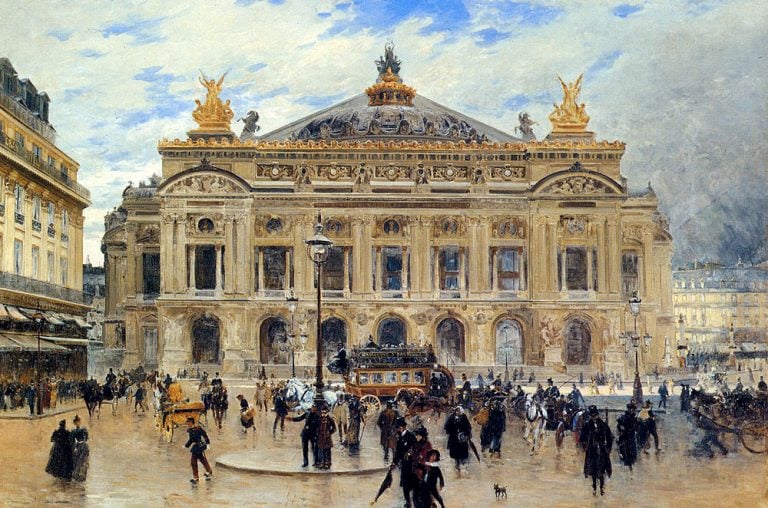 What Did the Artists from Midnight in Paris Look Like in Real Life? Part 1

If you’ve ever been to Paris, you know that there’s nothing like seeing the city in person. However, that’s no reason not to get a taste of it with some help from great artists. So, let’s look at ten Parisian landmarks paintings. Some are the works of born-and-bred Parisians. Conversely, others are by foreigners, some experiencing the city’s magic for the very first time. It’s wonderful to see the same place through such different sets of eyes. Have you ever seen these Parisian landmarks for yourself?

Parisian shopping is legendary, and many of the world’s most important stores appear on the celebrated Champs Élysées. This famous street culminates in the iconic Arc de Triomphe. In fact, the arch was inspired by ancient Roman triumphal arches and commemorates Napoleon’s military victories in the 19th century. French artist Jean-Georges Béraud (1848-1935) loved to paint elegant images like this one of Parisians out and about in their beautiful city.

The Tuileries is a spacious public park just outside of the Musée du Louvre. It doesn’t need much introduction, and neither does the artist. Édouard Manet (1832-1883) is very well known for shocking the public and inspiring generations of modernists. Although it’s much tamer, this painting of Parisians enjoying an outdoor concert fits right in with his other scenes of urban life. It also includes cameos of Charles Baudelaire and other modernists. And, if you like Manet, you can see some of the other people he depicted in his works here.

The Quai Voltaire is a Parisian street known for its bookshops. Indeed, you can see booksellers’ stalls lining the street beside the water in the foreground of the painting. (The French word quai means dock.) The artist, Childe Hassam, was an American Impressionist much admired for his views of cities like New York and Paris.

The Pont Neuf is the oldest of the many bridges that connect Paris’s left and right banks across the Seine. However, its name actually means “new bridge”. It was built in the late-16th century, so that’s probably when it got that name. This painting shows the bridge on fire, but it also gives a view of the bridge’s recognizable arches. The artist, Johan Barthold Jongkind (1819-1891) was, in fact, a Dutch-born painter who spent most of his career in France. He often depicted French landscapes and Parisian landmarks in a style influenced by both 17th-century Dutch landscape painting and Impressionism.

Jean-Francois Raffaëlli (1850-1924) was a Frenchman who painted and sculpted in several styles. His best-known works are Realist paintings of working-class Paris, but he also employed aspects of Impressionist, as you can see in this painting. The people, buildings, trees, and sky all blend into a hazy atmosphere that recalls one of Claude Monet’s renditions of Rouen Cathedral. The Boulevard Malesherbes was named after a French statesman who fell victim to the guillotine during the French Revolution. And it’s a neighbor of the better-known Boulevard Haussmann (see below).

The Boulevard Haussmann is famous for its shops, but it’s also known for its namesake. Georges-Eugène “Baron” Haussmann (1809-1891) was the urban planner who shaped Paris as we know it today. Indeed, working for Napoleon III, Haussmann completely remade the old city. He tore down buildings, widened roads, and updated infrastructure in order to transform Paris into a modern metropolis. He’s also responsible for promoting the Neoclassical style of architecture. It can be seen in Parisian landmarks like the Palais Garnier (below) and the buildings in this painting. The artist, Gustave Caillebotte (1848-1894), was a key French Impressionist. Enjoy more of Caillebotte’s urban paintings here.

The Opera Garnier is a glamorous opera house, built in the mid-19th century and named for architect Charles Garnier. It’s a gorgeous example of the Beaux-Arts style of architecture that combines classical, Renaissance, and Baroque elements. It’s also the setting of The Phantom of the Opera. American artist Frank Myers Boggs (1855-1926) spent most of his career in Paris, where he studied with Jean-Leon Gerome. The 21-year-old first arrived in Paris the year after the Opera Garnier opened. His vivid representation of the beautiful opera house makes it easy to see this young, Ohio-born American’s admiration of sophisticated French architecture.

Place Pigalle is a square in Montmartre, a neighborhood of artists and writers. The Moulin Rouge and Moulin de la Galette dance halls can be found here. Giovanni Boldini (1842-1931) was an Italian society painter who was popular in France. In fact, he probably knew this area well, visiting colleagues in their studios or patronizing the cafes that were popular artists’ hangouts. Most of his elegant portrait subjects, however, would have likely preferred more glamorous districts.

The Luxembourg Garden was established in 1610. Undoubtedly, this major park and beloved Parisian landmark has been a popular gathering place for centuries. It offers beautiful flowers, trees, fountains, ponds, an extensive sculpture garden, and other public attractions. The French Senate meets in the nearby Luxembourg Palace, seen in the background of this painting. Helena Sturtevant (1872-1946) was an American landscape painter who trained in Boston and in Paris. She achieved much success on both sides of the Atlantic. This is one of her well-known works.

Few Parisian landmarks are more famous than the Louvre (I can only think of two). The Louvre started out as a fortified castle in the 12th century. However, the building that we see today came about in the 16th century. It became a museum during the reign of Napoleon Bonaparte. People travel from all over the world to enjoy its unparalleled collections, just as these tourists are doing in James Tissot’s painting. Tissot (1836-1902) was a French-born realist painter. His sophisticated, beautifully-dressed subjects are easy to recognize. Correspondingly, if you see a painting of an elegant young woman in a frilly dress, it’s probably by Tissot.