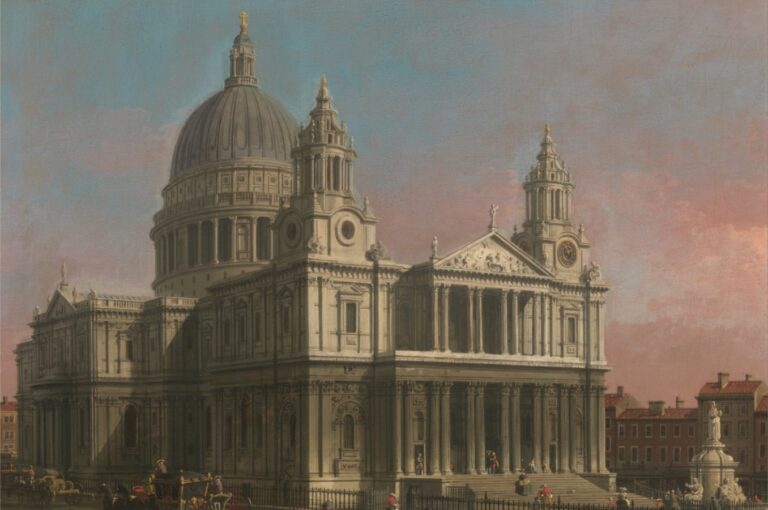 Since everybody seemed to enjoy visiting Paris through paintings, why not take a look at London? Just like Paris, London is a popular destination for artists and tourists alike, and it’s full of iconic places to see. Let’s enjoy ten London landmarks in painting through artists’ eyes. How many do you recognize?

Big Ben is probably London’s most recognizable icon. Even in the foggy background of this painting, there’s no mistaking it. Big Ben is Parliament’s official clock tower, and it’s actually called the Elizabeth Tower. We’ll talk about the Houses of Parliament a little later on. Artist George Hyde Pownall was known for gorgeous and atmospheric scenes of London landmarks like this one.

If you love art (and I assume you do if you’re reading this), you can’t miss the British Museum, another London landmark depicted in painting. There, you can see treasures from across world history, like the Rosetta Stone and the Parthenon Marbles. In this painting, Danish artist Vilhelm Hammershøi shows the museum’s 1823–1852 Neoclassical building as though he was approaching it along the street. Hammershøi liked muted colors and stark compositions, and he used both to great effect in capturing this celebrated British institution.

Buckingham Palace is certainly among the most popular London landmarks. The Palace has been the site of royal festivities since 1837 when Queen Victoria made it her official home. Parts of the structure are more than a century old than that, though they were heavily remodeled right before Queen Victoria’s time. This painting, by an anonymous British artist, depicts a key moment from those early years of royal residence – the Christening of Victoria’s eldest son, the future King Edward VIII.

4. The Houses of Parliament

The Houses of Parliament (also known as the Palace of Westminster) are obviously important to the British government, but they’re also significant to architectural history. After a fire destroyed the entire complex that used to be on the site, Gothic Revival proponent Sir Charles Barry designed this beautiful structure with help from the even-better-known Gothic Revival proponent A.W.N. Pugin. The building was just finished at the time of this painting. The artist, David Roberts, painted several views of the Houses of Parliament and other structures along the Thames River. He claimed that his goal was to record London for posterity before industry altered it irreparably.

Every fashionable city needs at least one fashionable park, and London’s Hyde Park certainly fits the bill. In this painting, well-dressed Londoners frequent Rotten Row, a tree-lined avenue inside Hyde Park. It’s a strange name for a lovely-looking place. Even more interesting, though, is artist Girolamo Pieri Pecci Ballati Nerli. (Talk about a name!) Nerli was a well-traveled Italian aristocrat best known for works he painted in Australia and New Zealand. Like his better-known contemporary Giovanni Boldoini, he was part of the quasi-Impressionist Italian art group the Macchiaioli.

The London street of Pall Mall, located in the Saint James section of the city, has long been associated with art, intellectual activities, and leisure. It looks beautiful, bathed in the golden evening light as seen in this painting by John Atkinson Grimshaw. The artist, an English native, was a skilled landscape painter particularly drawn to nighttime lighting and atmospheric effects. This painting is a wonderful example of his style, which is dreamlike, romantic, and unforgettable. Are you ready to see more London landmarks in painting?

Piccadilly Circus is one of London’s main districts for shopping, clubs, and entertainment. It’s in the West End, which is home to London’s most important theatres. This painting has a semi-abstracted, modernist feel that’s unusual for traditional classicist Arthur Hacker. However, it manages to beautifully capture the bright lights and movement of the area. Through the haze, it’s still easy to make out the lines of taxis and crowds of people pouring into the area for a night at the theatre.

When most people think of the painter Canaletto, it’s Italy rather than England that comes to mind. There’s a good reason for that. Canaletto was an 18th century Venetian painter, and he’s still well-known today for his precise representations of Italian landscapes and architecture. But in some cases, he applied this same style to London landmarks instead. St. Paul’s Cathedral is almost certainly the most famous church in London. It was designed by Sir Christopher Wren and built from 1675-1708.

9. The Tower of London

The Tower of London is known as the site of some gruesome events, but doesn’t it look pretty here? The artist, Albert Goodwin, was an English landscape painter who studied with the Pre-Raphaelites and was most prolific in watercolors. His oil paintings are much rarer, but this one still shows his preferred blue color palette. Goodwin is said to have been influenced by Turner, and that’s very evident here.

Trafalgar Square is an important public square and another London landmark in painting. It was named for the famous Napoleonic Naval battle of Trafalgar, in which Admiral Horatio Nelson was the hero. That big column you see in the middle of the image supports the statue of Nelson. However, that’s not the only patriotic thing going on here. The scene depicts celebrations that took place on the night of November 11, 1918, to celebrate the Armistice – the official end of World War I. I love how a few scattered fireworks light up the otherwise-dim evening sky in the upper half of the painting. As a bonus, several other London landmarks are visible on the skyline. How many can you identify?