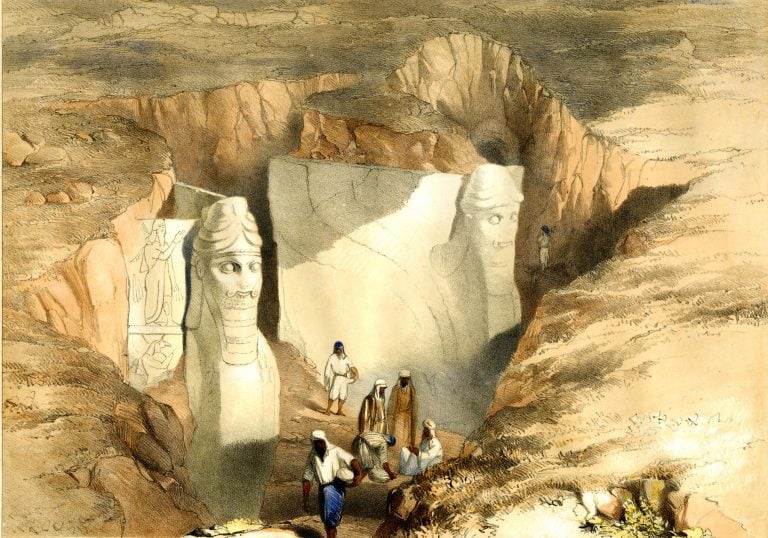 Lamassu is an iconic winged deity and a lasting motif from the ancient Near East. The most prevalent form of the Lamassu is attributed to the Assyrian Empire, even though its origins preceded the Assyrian period. Monumental Lamassu were installed in prominent locations such as entrances to important buildings as symbols of authority and protection. This deity has had many names, variations, and associated folklore throughout its development in antiquity.

Mythical winged creatures with human heads have been a frequent occurrence in Near East mythology. The first records of such a being can be traced to the Kingdom of Ebla as early as 3000 BCE. The word “Lamassu” has been attributed to the early Chaldean language that has West Semitic roots. Lamassu originally referred to a Sumerian deity and was referenced in the Epic of Gilgamesh, the great Sumerian legend written around 2100 BCE.

Development in the Assyrian Period

Lamassu evolved from the Sumerian era through the Assyro-Akkadian period. The Mesopotamian civilizations adopted this name around 700 BCE and the Assyrians developed its distinctive and recognizable form. The first distinct Lamassu motif appeared in Assyria during the reign of Tiglath-Pileser I around 967 BCE. They featured prominently in the famous royal palaces at Nimrud commissioned during the reign of Ashurnasirpal II. The motif form disappears in architecture following 630 BCE.

Lamassu played a significant role in the religions of Mesopotamia and were common in households from the Sumerian to the Babylonian era. The winged deity has been associated with the messenger god, Papsukkal, by the Akkadians, and the fire god, Ishum, by the Babylonians. Lamassu represents the zodiacs and its role was to bring about peace by quelling destructive forces.

Given the protective function, Lamassu were placed as sentinels at prominent locations in ancient Mesopotamia. This placement likely had both religious and architectural significance as they were often used as load-bearing supports for structures they held up. They were generally carved from a single block of alabaster and the older statuary were about 10 to 14 feet (3 to 4.5 meters) tall.

In the Akkadian language, the word “Lamassu” translates to “protective spirits” and the deity is indeed believed to have an apotropaic function. They were sculpted in colossal sizes and placed in prominent pairs at the entrance of cities, palaces, throne rooms, templates, courtyards, or other structures of significance. Their strategic placement was likely a precursor to the location of heraldic lions at entrances.

Apart from their prominence in civic or state-sponsored sculpture, Lamassu were also engraved on clay tablets and buried under thresholds by ordinary folk as protection for dwellings. The mythical creature was believed to be the harbinger of peace and good fortune.

Evolution and Symbolism of Lamassu

Lamassu is generally depicted with a body of a lion or a bull with the large wings of an eagle and the head of a human. The body of a bull or lion both were likely symbolic of the immense strength of the deity. The wings of the eagle were symbols of swiftness and power. The royal crown or cap and the beard on the human head form were indications of wisdom. These attributes were undoubtedly meant to intimidate the forces of evil and be a wise and calming presence for the occupants.

Many carvings or statues of Lamassu depicted five legs, possibly to give the illusion of movement as the statues appear to be moving forward when viewed from the side. When viewed from the front, Lamassu appears to be stationary. Their pose is characteristic of Achaemenid art and is generally interpreted as a gesture of adoration.

The archeological sites of the Assyrian capitals of King Assurnasirpal II (reigned 883–859 BCE) and King Sargon II (reigned 721 to 705 BCE) have yielded the most famous Lamassu statues in existence.

Lamassu of the King Sargon

King Sargon II had a particular interest in Lamassu and commissioned several works including these mythical beasts. In his capital city, Dur Sharrukin, Sargon II placed the Lamassu in pairs on each of the seven gates to the city. While their earlier forms were carved with the body of a lion, the ones from Sargon II’s palace have been depicted with a body of a bull. The carving from this period is more deliberate and defined. Remarkably, the Lamassu of the citadel of Sargon II are depicted smiling!

Although the reason for Lamassu’s disappearance from Mesopotamian constructions remains unknown, since its discovery, the symbol has been revived in contemporary culture. Lamassu or Lamassu-inspired beings have appeared in movies and books, in games such as Dungeons and Dragons or Magic, and in several video games. The British army stationed in Iraq and United States forces deployed in Iraq and Iran included a Lamassu motif in their insignia, and there are Iraqi banknotes that feature the motif as well.