Murder on the Canvas: How Artists Portrayed the Ultimate Taboo 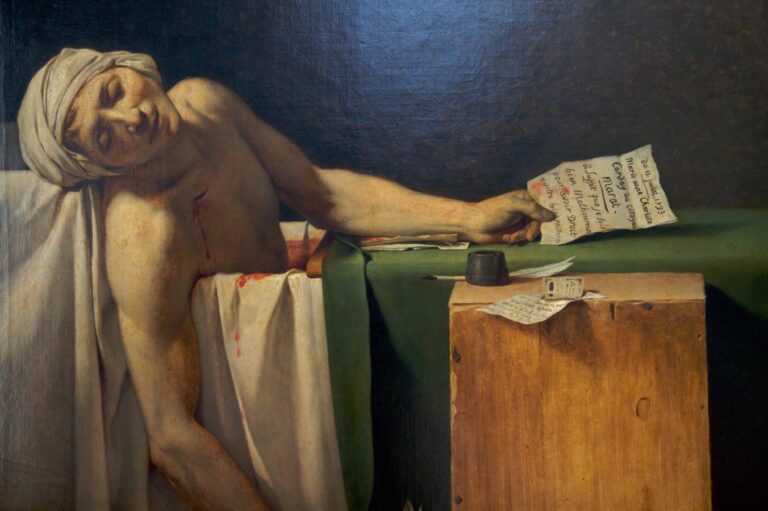 To quote the novelist, Aldous Huxley, “It takes two to make a murder. There are born victims, born to have their throats cut, as the cut-throats are born to be hanged” and if we look at the way in which artists have portrayed murder on the canvas, we could add a third and fourth protagonist to this idea: the artist and the viewer.

Without question, there is a voyeuristic pull towards gazing upon the horror and artists throughout history have exploited our grizzly interest in the macabre.

Murder on the Canvas: Historical

In this work of 1507, Bellini shows the death of the Dominican friar, Peter of Verona and his companion, Dominic, in the thirteenth century.  A preacher and inquisitor, Peter of Verona was responsible for many converting back to Catholicism. Caught by hired assassins on the road to Milan, the murderers attacked the men as they were returning home.

The brutality of the assassination is reflected in the acts of the woodcutters in the background.  It is said that as Peter was bleeding from his words, he wrote the words “Credo in Deum” on the ground.

Murder on the Canvas: Political

The Death of Jean-Paul Marat has inspired many images.  The fiery orator of the French Revolution was murdered by, Charlotte Corday, a young Royalist, who managed to gain entry to Marat’s apartments with the petition that can be seen in his left hand.  His usual practice was to work in his bath tub due to the disfiguring skin disease that he treated through bathing for long period.  Here, David portrays the moment after Corday has stabbed Marat as he was writing.  His friend, Marat is dying and his half opened eyes, the drooping arm, still clutching his quill, and the blood dripping onto the white sheet give this work a sense of pathos that Munch focused on in his work of the same name.

In Munch’s depiction, he has substituted himself and his one time lover, Tulla Larsen into the roles of Marat and Corday.  The focus is on the naked body of Corday/Larsen rather than the death of Marat/Corday.  Inspired by a hunting accident that occurred in front of Larsson, where Munch injured two of his fingers,  Munch reveals a shocking brutality with the blood from his injured hand on the sheets and splashed along the legs of Corday/Larsen which contrasts with David’s focus on the gentle expiration of the man.  The contrast with David is also apparent when examining the brushwork. The quick strokes of Munch conjure up a scene of devastation and turmoil and clearly is a metaphor for his emotional state at the time of the work.

Murder on the Canvas: Mythological

As I beheld two shadows pale and naked, Who, biting, in the manner ran along that a boar does, when from the sty turned loose. One to Capocchio came, and by the nape seized with its teeth his neck, so that in dragging it made his belly grate the solid bottom. And the Aretine, who trembling had remained, said to me: ” That mad sprite is Gianni Schicchi, And raving goes thus harrying other people.”

This beautifully composed work by William-Adolphe Bourguereau portrays the eighth circle of hell in Dante’s Inferno where the imposters and falsifiers reside. Gianni Schicchi who took on the identity of a dead man to gain an inheritance, sinks his teeth into the neck of the alchemist, Capocchio. Dante and Virgil remain in the shadows, horrified by this display of violence.  In the background, the devils laugh and jeer at this murderous scene.  The power and force of the muscular bodies, with tendons straining and light bouncing off the naked flesh fill the front plane of the composition.

Murder on the Canvas: Biblical

The use of light and shadow plays an important role in this powerful portrayal of murder, with Artemisia Gentileschi using chiaroscuro to great effect as she depicts the moment that Judith, a widow, murders the general Holofernes, who is about to destroy the city of Bethulia. Many artists have depicted this particular murder on the canvas, but it takes a woman to show the brutality in an almost realistic style. The maid helps to hold him down but Judith uses her powerful forearms to decapitate the hateful general.   Blood pours across the sheets and off the edge of the bed but neither woman flinches from this brutal act.

Artemisia Gentileschi had recently been through the rape case, the details of which often overshadows her work, but here we can almost imagine her using the experience she had been through to pass comment on the society that condemned her as a victim, rather than the perpetrator of the crime.

Murder on the Canvas: Society

In these two paintings, both Cezanne and Sickert portray murder in ways that we today recognise only too well.

Cezanne captures the moment that the final blow is about to be delivered.  The brutality of this scene contrasts with the landscapes and still life paintings that Cezanne is known for.  This early work has a dark tonal quality that puts the viewer in the painting; we peer into the dark to see what is happening.  We recognise no one in this painting and the anonymous quality of the characters create a timeless quality to this type of act.  The murderer’s accomplice holds down the victim, just as Judith’s maid servant does in Gentileschi’s.

However, in Sickert’s painting, Mornington Crescent Nude, the murderer is absent from the scene.  Based on a true story, Sickert creates a scene that confuses the viewer. The light from the partially opened curtains illuminate the naked body on the bed.  At first, we think she is asleep, but her posture, the necklace, the painted lips start to make us uncomfortable. On the chair is a man’s jacket.  Does that belong to the murderer?  Is he still there?

It seems apt to quote William Shakespeare on the topic, when in Hamlet, the eponymous hero, as he instructs the players to portray the murder of his father, tells them: “For murder, though it have no tongue, will speak with most miraculous organ”. The hand and the eye have much to say on the subject of murder on the canvas.