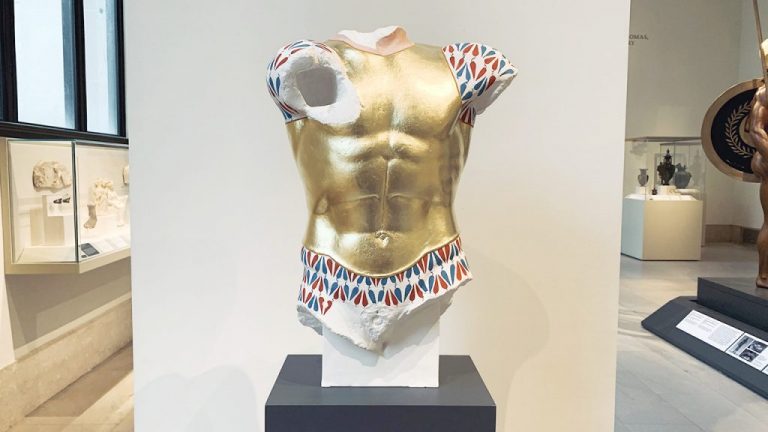 Have you ever wondered how the Greco-Roman statues looked during antiquity? Thanks to the Met and its amazing team, you can now get a glimpse of the colorful world of the ancient Greeks and Romans. Chroma: Ancient Sculpture in Color will be open to visitors until March 26, 2023. So if you happen to visit New York by then, be sure to visit this beautiful exhibition!

Let’s get to the nitty gritty right away. A total of 17 color reconstructions will be waiting for you within the Metropolitan Museum of Art in New York. You will have a chance to observe these reconstructions throughout the Greek and Roman Art galleries, specifically on the mezzanine level (Gallery 172). A few of the reconstructions are placed side by side with the originals so that the visitors can appreciate how much work was put into their creation.

The Met indicates that the Chroma exhibition focuses on four principal subject matters: discovery and identification of color and other surface treatments on ancient works of art, the reconstruction and interpretation of polychromy on ancient Greek and Roman sculpture, the role of polychromy in conveying meaning within Greek and Roman contexts, and the reception of polychromy in later periods. In his brief description of the exhibition published on the museum’s official site, Max Hollein, Director of the Met said:

This innovative exhibition will activate The Met’s displays of ancient Greek and Roman art like never before by displaying colorful reconstructions of ancient sculptures throughout the galleries. It is truly an exhibition that brings history to life through rigorous research and scientific investigation, and presents new information about works that have long been in The Met collection.

Now, you may be wondering, how can we be genuinely sure that these reconstructions are historically accurate? How can we possibly know that these are indeed the colors the artist once preferred to adorn these specific sculptures and reliefs with? Here’s the answer of the director who talked to The New York Times reporter/contributor Zachary Small:

It is an iterative process to get closer and closer to the truth. You will never reach the absolute truth.

In other words, when it comes to these reconstructions, reaching an absolute historical accuracy is out of the question. Sarah Bond, a Roman Historian at the University of Iowa, shared similar sentiments to Hollein. She indicates that “all reconstruction engages in uncertainty.” Therefore, what’s possible is to utilize the wonders of 21st-century technology along with the archeological and literary data to create the most probable reconstructions while acknowledging that the acquired results will always be open to doubt and questioning.

This is essentially what the German archeologist, Prof. Dr. Vinzenz Brinkmann, Head of the Department of Antiquity at the Liebieghaus Sculpture Collection in Frankfurt am Main, and his wife, Dr. Ulrike Koch-Brinkmann, did.

With their team, the couple employed numerous analytical techniques including 3D imaging, multispectral photography, X-ray diffraction, ultraviolet-visible absorption spectroscopy, and thermography. These archeologists combined the power of science with comparative research methods of ancient works of art and historical analysis of ancient imagery and pictorial elements.

Now let’s take a brief look at some of the highlights of the exhibition!

The Kneeling Archer of Aphaia

The marble original of this archer belongs to the Archaic Temple of Aphaia located on the Island of Aegina. The temple was dedicated to the local goddess, Aphaia, whose domain is associated with fertility, childbirth, and agriculture. Although the temple was constructed in the 6th century BCE, archeological evidence presents that this particular deity had been worshipped since the Bronze Age within this particular area.

The temple was famous for the beauty of its pediments which our Kneeling Archer (specifically the west pediment of the temple) was part of. The original is currently being displayed at the State Collections of Antiquities and the Glyptothek in Munich. Some scholars suggest that this is indeed a portrayal of the famed Trojan hero, Paris, from Homer’s Iliad. In this reconstruction, we see that his vest is subtly adorned with lions and griffins, accompanying the complex zigzag motif; a sense of fashion I definitely wouldn’t say no to, no matter which millennium we are in.

With a lion’s body, the wings of a bird, and a human head, the Sphinx was a mythical creature that appeared recurrently within Greco-Roman literature and art throughout different periods and regions. Without a doubt, one of its most significant appearances was in Sophocles’ tragedy, Oedipus the King, where Oedipus encounters a sphinx outside of Thebes and solves her riddle.

This sphinx we see here was a finial which adorned a tall grave marker (so-called Megakles stele). It was dated to the Archaic Age circa 530 BCE and was made from Parian marble. Its provenance is quite ambiguous. The specific location where it originally belonged is unknown. 13 different scientific methods were employed during its reconstruction.

Unarguably, the most fascinating part of it is its wings and chest in terms of color palette and design. Although the motifs on the wings and chest are structurally in stark contrast, they somehow form a harmony with the addition of golden yellow in the middle.

Here is the reconstruction of renowned Hellenistic bronze statues (circa 2nd century BCE) excavated on Quirinal Hill of Rome in 1885 near the ancient Baths of Constantine. Today, the originals are being displayed at the National Roman Museum. They were made by using the lost wax technique, a costly method when it comes to these kinds of big-scale statues with intricate details.

Both statues can be considered two of the best examples of the Hellenistic Period. They were caught in an anatomically natural and convincing episode. Unlike Archaic and Classical styles, they are in a rationally motivated posture that is fascinating to the eye of the observer from multiple sides. With the reconstruction of Prof. Dr. Vinzenz Brinkmann and Dr. Ulrike Koch-Brinkmann, these gentlemen undoubtedly became even more alive. Bleeding wounds on their faces and ears as well as swollen lips and nipples are easily recognizable as if they just stopped and were trying to catch their breaths.

All of these reconstructions and more will be open to visitors of Chroma: Ancient Sculpture in Color exhibition at the Met until March 26, 2023. Don’t miss it!