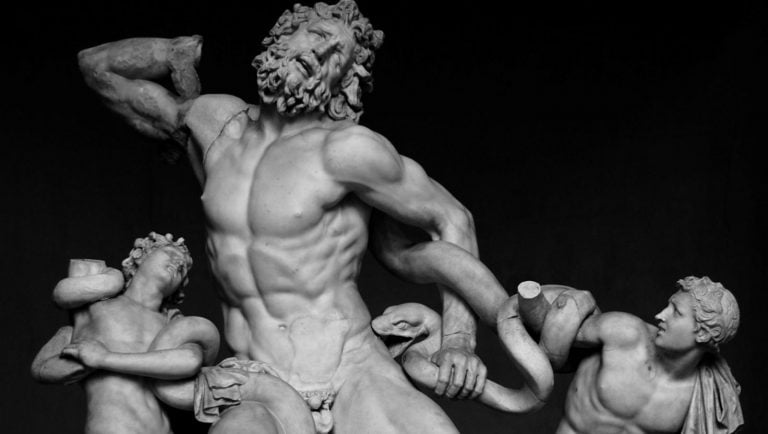 Laocoön and His Sons, also known as the Laocoön Group. Marble, copy after a Hellenistic original from ca. 200 BCE. Found in the Baths of Trajan, 1506, Vatican Museums, Vatican.

Greek sculptures have had a profound effect on art throughout the ages. Many of the styles have been reproduced and copied by some of, what modern-day audiences would classify as, the finest artists to have ever lived – a great example here is Michelangelo. But how to catch up on all these ancient statues? How to shine during a cocktail party? To the rescue comes DailyArt Magazine! In this article, you will learn about SIX (only six, we promise) ancient Greek sculptures you should know!

First of all, you must know that modern scholarship identifies three major stages of development of Greek sculptures. They are the Archaic, Classical, and Hellenistic periods. Frequent subjects were the battles, mythology, and rulers of the area historically known as ancient Greece. Regarding the materials, Greek sculptures were most often in bronze and porous limestone. While bronze seems never to have gone out of fashion, the material of choice would eventually become marble. There is a trouble with bronze –  it was a very precious material. Therefore, very often the original bronze sculptures were melted down.

Also a fun fact – original Greek statues were brightly painted, but after thousands of years, those paints have worn away. So the whole idea of classicism being white and “elegant” is a MYTH. Yes. That’s the kind of info that will impress your friends!

Moscophoros, which means “the calf-bearer,” was found in fragments in the Perserschutt in the Acropolis of Athens. The statue is estimated to have originally measured 1.65 m (5.4 ft) in height. According to an inscription on its base, the statue was a votive offering to the goddess Athena by a certain Rhonbos (although the name is not entirely legible). It is thought to represent Rhonbos himself, bringing sacrifice. Moscophoros is a typical Archaic sculpture – static and naked, with a smiling face.

The Artemision Bronze is thought to be either Poseidon or Zeus. Fishermen found it off the coast of Cape Artemisium in 1928. The figure is more than 2 m in height. There are still debates over the subject of this sculpture because its missing thunderbolt rules out the possibility that it is Zeus, while its missing trident also rules out the possibility that it is Poseidon. It has always been associated with ancient sculptors Myron and Onatas. It is certainly the work of a great sculptor of the early Classical period, notable for the exquisite rendering of motion and anatomy.

Created in honor of the Greek god Hermes, Hermes of Praxiteles represents Hermes,while carrying another popular character in Greek mythology, the infant Dionysus. The statue was made from Parian marble and historians believe the ancient Greeks created it during 330 BCE. It is known today as one of the most original masterpieces of the great Greek sculptor Praxiteles. The face and torso of Hermes are striking for their highly polished, glowing surface. The back, by contrast, shows the marks of the rasp and chisel, and the rest of the sculpture is incompletely finished.

A 200 BCE marble sculpture depicting the Greek goddess Nike, the Winged Victory of Samothrace is considered today as the greatest masterpiece of Hellenistic sculpture. The Louvre displays it currently. It is among the most celebrated original statues in the world. It was created between 200 and 190 BCE, not to honor the Greek goddess Nike but to honor a sea battle. The Macedonian general Demetrius first erected it following his naval victory in Cyprus.

The nude female body is revealed by the transparency of the wet drapery, much in the manner of classical works from the 5th century BCE, while the cord worn just beneath the breasts recalls a clothing style that was popular beginning in the fourth century. In the treatment of the tunic, which in some parts brushes against the body and in other areas billows in the wind, the sculptor has been remarkably skillful in creating visual effects.

It’s popularly believed that this statue depicts the Greek goddess of love and beauty, who was often rendered half-naked. However, some have suggested the sculpture is not Aphrodite/Venus, but Amphitrite, the sea goddess who was particularly adored on Milos. Still others have proposed she’s Victory, or perhaps a prostitute. With her arms long missing, would-be context clues have been lost for centuries.

The farmer Kentrotas, who found the whole statue in 1820, also found fragments of an arm and a hand. However, as Venus de Milo was being reassembled, those arms were discarded for having a “rougher” appearance.

6. Laocoön and His Sons

A statue currently situated at the Vatican Museum in Rome, Laocoon and his Sons, is also known as the Laocoon Group. It was originally created by three great Greek sculptors from the island of Rhodes, Agesander, Polydorus, and Athenodoros. This life-size statue is made of marble and depicts a Trojan priest named Lacoon, together with his sons Thymbraeus and Antiphantes, being throttled by sea serpents. In style it is considered “one of the finest examples of the Hellenistic Baroque” and certainly in the Greek tradition. However, it is not known whether it is an original work or a copy of an earlier sculpture, probably in bronze, or made for a Greek or Roman commission.