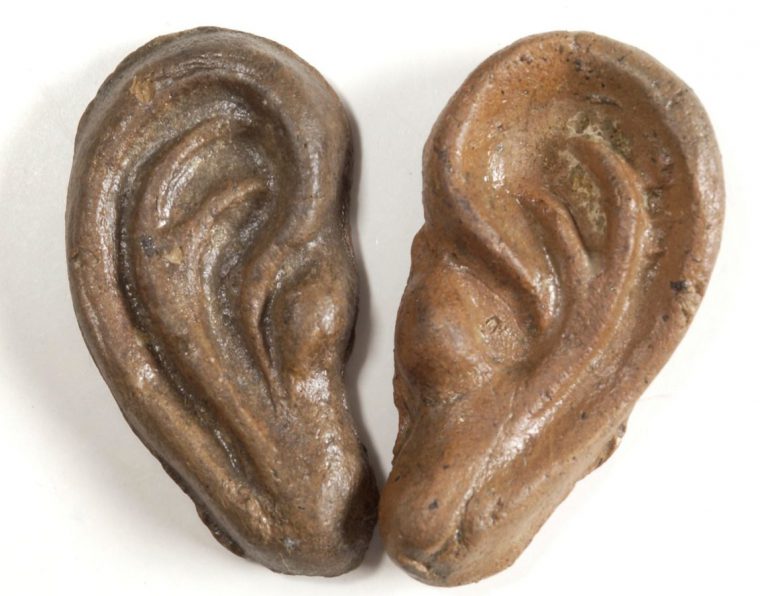 Eerie, mysterious, and fascinating, ancient anatomical votives represent literal parts of people’s past. When most people think of a votive object, a beautiful statue might come to mind, not an anonymous pair of ears or a woman’s uterus. Anatomical votives are just that, a fragment of the human body that was supposedly made as an offering to a god or goddess in Ancient Rome and other parts of the Mediterranean. Were these votives truly meant as cult offerings, or were they meant for another purpose entirely?

What is an anatomical votive?

In ancient Greece and Rome, many people believed in and worshiped deities. There were many gods and goddesses who people turned to for help or guidance. It was common practice to make votive offerings to these deities in return for their assistance. Apparently, anatomical votives were no different. It is speculated that these types of votives were also offered in exchange for relief or aide from maladies; such as, those seeking a cure or to be healed from an illness or an affliction. In other cases, it is thought that anatomical votives were meant as gifts of gratitude for having their request fulfilled.

Where are they found?

The majority of anatomical votives have been discovered at ancient healing centers around the Mediterranean, primarily in Italy and at some archaeological sites in Greece and Turkey. An overwhelming menagerie of organs and body parts: eyes, ears, mouths, tongues, teeth, noses, arms, legs, breasts, hands, male genitalia, feet, bladders, uterus, entire heads, and even single toes have been recovered by the thousands. Imagine entering a room, packed from floor to ceiling with earthen eyes or an altar covered with a mountain of terracotta hands. What a strange sight to behold; certainly, one that might set your imagination on fire.

Anatomical votives were largely mass produced, which explains why the manufacturers favored molds to make these tokens. Since votives were in high demand, they could be produced more efficiently with the help of a mold. Terracotta clay was the most popular material used to make these kinds of votives. Other materials such as bronze, wood, wax and even marble were also used but these are rare; in fact, many of these votives no longer exist. Votives were often made with holes in order to hang them on a wall or suspend them from a ceiling. Who needs curtains when you have a canopy of arms decorating the room? Another mystery is who made these votives, and was it a good way to earn a living? No one seems to know since there are no records of the makers.

Pain Relievers vs. Gifts of Gratitude

What about the people who used the votives: who were they? Were these votives available to anyone, or just reserved for the elite? There has been much debate over this question and the answers range from ordinary, local people to rural villagers to wealthy populations being users of these types of offerings. Overall, it seems anatomical votives were a part of the culture that reached across classes, and most likely were available to everyone. However, the true purpose of these votives continues to remain a mystery.

Some scholars and archaeologists believe anatomical votives were associated with a specific health problem or physical ailment. It is believed by some that a suffering individual would make a physical offering, an anatomical votive, that resembled the body part causing them pain or trouble asking to be healed or cured by a particular god or goddess. For example, a votive of a tongue might have been linked to a disease or illness affecting the tongue, mouth, or speech.

Another speculation is that a votive was made as an offering of gratitude and respect to thank a deity for coming to their aid. An example of this could be a votive of a womb in relation to childbirth or pregnancy. While some might believe that anatomical votives were directly linked to a specific ailment or illness, others believe there was a deeper meaning intended. Suppose a head votive didn’t literally represent a headache but was meant to indicate a creative block that a person wished to have cleared so they could revive their creativity and continue to make art? This is an entirely more abstract idea altogether!

The ultimate question is did anatomical votives actually work? Did people actually recover or have their requests fulfilled? Some speculate that they did. The fact that so many votives were seen by others who may have shared the same illness or disease might have given them hope or strengthened their belief in the power of a deity. And we can certainly not discredit the healing power of hope and belief in today’s day and age, much less so in ancient times. Still, we cannot be certain since there are no records or documentation about the true purpose of these votives. Few anatomical votives have been found with inscriptions but one votive cannot necessarily speak for all the thousands that have been discovered. But, A little mystery is always good; it keeps us hungry yet also feeds our curiosity so we desire to learn more.

To read more about art and bodies, check out: