Masterpiece Story: Aeneas Taken by the Sibyl to the Underworld by Jacob van Swanenburgh 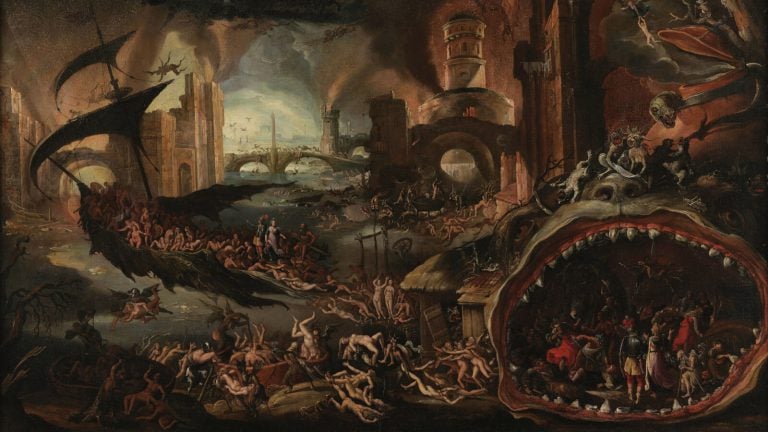 Aeneas Taken by the Sibyl to the Underworld is one of only 11 known surviving works by Jacob van Swanenburgh. It is a rare gem of late Renaissance and early Baroque painting which does not gloss over the horrors of the Underworld. It brazenly shows the major players of the Classical world moving amongst Christian sins and attitudes. There are two different worlds that it draws upon for inspiration and iconography. This is a universal Hell.

Jacob Isaacsz van Swanenburgh was a Dutch painter, draftsman and art dealer. Little is known of his professional career and even less of his personal life. It is known that van Swanenburgh was born in Leiden, Netherlands; lived in Naples, Italy; and died in Utrecht, Netherlands. However, despite a short biography, his artistic legacy exists through his most famous student, Rembrandt. Van Swanenburgh loved hellish scenes which used highly contrasted light and shadow, known as chiaroscuro. Rembrandt later became famous for his use of artificial light and chiaroscuro within his compositions.

Aeneas Taken by the Sibyl to the Underworld is oil on canvas and measures 40 x 59.1 in. (101.5 x 150 cm). It is attributed to van Swanenburgh because the painting does not have a signature. This was not uncommon during the early 17th century. Signing works did not become more prevalent until the 18th century. Many famous 17th century artists like Caravaggio or Artemisia Gentileschi did not consistently sign their paintings. They are simply recognized by their distinctive signature style. Sadly this can lead to a higher risk of misattribution and outright forgeries in the modern era!

The painting captures one episode in the life of Aeneas who was a Trojan hero and legendary ancestor of the Romans. He was a demi-god, or half-god, as the son of the goddess Aphrodite and the mortal Anchises. His life stories are recounted in several classical sources including Homer’s Iliad, Virgil’s Aeneid, and Ovid’s Metamorphoses. The painting shows the moment Aeneas visited Cumae, Italy to consult Sibyl. Upon instruction, he cut the Golden Bough near Lake Avernus which opened the entrance to the Underworld. There, in the Underworld, he meets the soul of his deceased father who presents the souls of future famous Romans.

Aeneas is identified by his red-feathered helmet and long sword. Sibyl, the female prophet, is identified by her violet and blue gown. She wears a white headpiece, possibly a veil, indicating her ability to utter the oracles and prophecies of the god Apollo. The two of them appear twice in the composition giving a sense of time or progression. The first appearance is on Charon’s flying boat, and the second appearance is at the mouth of the Underworld. Charon, the man steering the flying boat, was believed by the ancient Greeks to shuttle the dead across the River Styx from the land of the living to the land of the dead. Flying high above the scene is a chariot with the God Hades of the Underworld and his Queen Persephone.

Aeneas Taken by the Sibyl to the Underworld is an interesting blend of Classical and Christian religious imagery. Within the mouth of the Underworld are representatives of various Christian sins. The woman laying on the floor represents laziness. The woman above laziness represents slander by pulling out her tongue. To slander’s left is lust represented by an embracing couple. To slander’s right is murder represented by a man holding a sword to another figure’s neck. Above murder is avarice. Avarice is probably the most graphic image as an old woman with slack cheeks, drooping breasts, and stringy hair. Her right hand is outstretched holding a coin bag. Is she begging for more money? Or, is she flaunting her wealth?

Above the mouth of the Underworld is a disturbingly large locust. It sits at the feet of various demonic creatures. While the symbolism of the creatures is vague, the locust is specific. It definitely can allude to the eighth plague of Egypt as described in the Book of Exodus. The plagues of Egypt were ten disasters inflicted upon Egypt to convince the Pharaoh to free the Hebrew slaves. Locusts were sent to cover the ground and feast upon all the fields, trees, and plants. They caused agricultural disaster resulting in famine and hunger. Such images are the stuff of nightmares!

The Book of Revelation is the last chapter of the Christian Bible, and it describes the end of days and the judgement of all souls. It is a book filled with images of fire and brimstone. It definitely has inspired many artists when depicting hellish scenes. Aeneas Taken by the Sibyl to the Underworld is no exception with its ruined buildings, fiery blazes, and scorched earth. Damned souls fall from the sky while painful screams fill the air. People in the foreground are being roped and dragged. Meanwhile people in the midground are being boiled and cooked alive.

However, amongst this scene of despair is a glimmer of hope. There is a single angel saving a naked figure. The angel is aloft and holds with his or her left hand the naked figure. The angel points with their right hand towards an unseen destination. Perhaps the angel points to heaven? However, heaven is traditionally represented as above, not to the left. Therefore, perhaps the angel is pointing to the land of the living which is on the left bank of the River Styx and opposite from where the naked figure has been lifted. It is a solid argument that the angel is giving this figure a second chance at life. Perhaps the figure is not destined to die yet?

Aeneas Taken by the Sibyl to the Underworld is an awe inspiring masterpiece of the early 17th century. It has all the elements possible for a modern horror film. There is physical and psychological terror. There is the allure of temporary sin and instant gratification punished by permanent damnation and delayed retribution. Also there is the glimmer of hope and salvation by one person’s rescue from the carnage below. It draws upon Classical and Christian imagery to fill its scene with countless background stories and anecdotes adding to the overall complexity. Many feelings and adjectives can be used to express this painting, but no one can say it is boring!

Aeneas Taken by the Sibyl to the Underworld. Collection. Royal Museums of Fine Arts of Belgium [Accesed 24 September 2021].

Aeneas Taken by the Sibyl to the Underworld. Google Arts & Culture [Accessed 24 September 2021].

The Muisca Raft is a masterpiece of Pre-Columbian art. It was created by the Muisca people who lived in a region of today’s Colombia. Muisca...