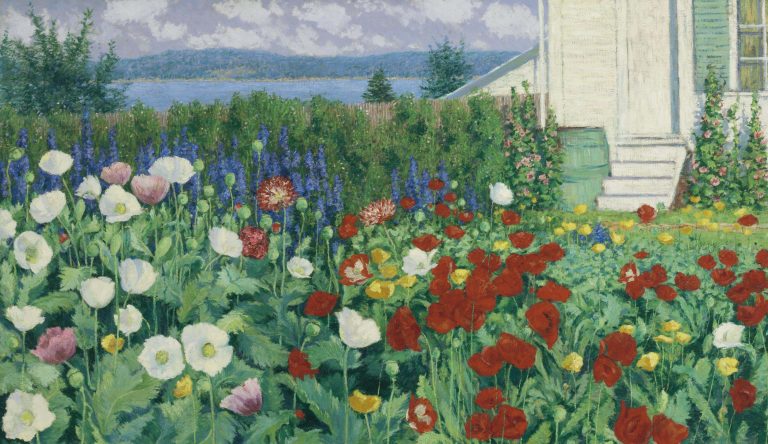 It is widely accepted that gardens of all shapes and sizes have provided tremendous inspiration to artists throughout time. Artists focused their gaze on different aspects of the gardens that they painted: the mood, the foliage, the colors, and most frequently, the effects of light. Here are ten beautiful artworks with gardens.

Camille Pissarro is regarded as the father of the Impressionists and played a pivotal role in shaping the early Impressionist movement. He was passionate about nature and its depictions and developed en plein air technique that was perfected over the years. He excelled at rural scenes and enjoyed painting idealized villages, and farms.

This painting depicts a bright sunny day in Éragny, located in the northwestern suburbs of Paris, France. Pissarro portrays a beautiful floral garden with trees on either side and a house peeking through the background. A woman in the foreground tends to her crops, adding to the domestic charm. This painting was completed in 1898 upon Pissarro’s return to France following the Franco-Prussian War.

Nidha Mal was a court painter in the royal atelier of Muhammad Shah. Not much is known of his personal life, but it is believed he worked at the courts of Delhi before moving to Lucknow where he continued his work. This painting from his later period exemplifies the naturalistic style that was refined by the mid-18th century Mughal miniatures. It depicts a highly idealized rendering of a lush Mughal garden. In the top half of the composition is an architectural structure typical of the grand Mughal style with ornate arabesque and natural patterns, textiles, and jali windows. There is a hint of a shamiana or canopy on the side of the building that is not in view.

Lush heavy foliage in varying shades of green dominates the composition. A royal couple appears in the clearing by a flowing river. They are locked in a familiar, amorous embrace as they smoke out of two hookahs held by their royal attendants. All of the figures are dressed in fine clothes and jewels typical of Mughal royals.

3. The Most Enviable Room

Arthur Cramer James Wasse was an English-born artist from Manchester. He started painting at an early age and received formal training in Manchester, London, and Munich. Enthralled by the natural landscapes of Southern Germany, he spent a significant course of his professional career in Rothenburg. There he created several paintings cataloging his picturesque surroundings.

In this painting, Wasse depicts the hint of a quaint room covered by an awning. The room is partially hidden in the dark but appears to be complete with a pendant light, a table, and a chair. Artwork hangs on the wall and perhaps a window in the background. This room is surrounded by a thick frame of shrubbery that remains the primary focus of the painting. Flowers of brilliant hues cover the shrubbery having the most remarkable impact.

Michigan-born American artist, Frederick Carl Frieseke initially trained at the Art Institute of Chicago and later at the Art Students League of New York before leaving for France in 1898. He became a member of the Giverny art colony where he spent the rest of his life. He acquired the house next door to Claude Monet. Despite this close proximity, Frieseke never became acquainted with the older Impressionist master, nor was his work patterned after Monet’s. Frieseke did however find inspiration in the form and aesthetic of Pierre-Auguste Renoir and his figurative forms often resembled those of Renoir.

Frieseke became well known for presenting female subjects often in dappled sunlight. A large body of his works portrayed female sitters in the garden engaged in leisurely pursuits and this painting is no exception. In this work, the focal point is a woman dressed in a yellow kimono, deliberately bent before a manmade pond that is in the middle of a splendid garden. The delicate pattern on her dress compliments the explosion of color in the garden where she stands. Flowers cover the grounds and the vines that envelope the building behind her. In Frieseke’s signature style, dappled sunlight bathes the entire composition.

5. The Gardens of Alcázar

Although his first creative pursuit was an education in music, Spanish-born Manuel Garcia y Rodriguez dedicated his life to painting and became an accomplished landscape painter and Orientalist. He participated in the National Exhibition of Fine Arts in Spain and was a recipient of many accolades over his illustrious career.

In this painting, Rodriguez depicts the carefully arranged Gardens of Alcázar in Seville in full bloom. Immaculately trimmed hedges line the garden walls, enclosing an explosion of flowers. Tall trees frame the majestic architectural structures within. There are two solitary female figures that are shown engaged in domestic pursuits. The presence of just these two figures conveys a sense of life and hustle bustle in this neatly laid out composition. Rodriguez’s works remain well-known because many of his landscapes were reproduced as illustrations.

Gardens enthralled Spanish artist, Joaquín Sorolla y Bastida and upon his move to Madrid in 1890, he was determined to craft a magical space full of colors of his own. He painted outdoors in the summers and created a large body of work depicting his cherished garden in his identifiable luminous style marked with bright Mediterranean sunlight and shadows.

This painting also depicts a bright flurry of varying shades of green interposed with flowers of varying colors that are dotted throughout. A large flowering tree dominates the top of the composition while a bird bath sits at the very center, emphasizing the various paths. There are several sections of flowers with borders of low bushes and a prominent hint of architecture on the far left.

French landscapist, William Didier-Pouget, made the countryside of southern France the focus of his tasteful works. Although he has been associated with the later phrase of Impressionism, he was not an Impressionist. Over his career, he held memberships in several prestigious artist networks of the late 19th century.

In this painting, the artist depicts a detail in an undoubtedly scenic courtyard on a warm sunny day. The eye is drawn to the bright hydrangeas in tall planter pots that are installed along the walls. The tall hedges in the background hint at an enclosed garden that no doubt formed the most exquisite view.

John Singer Sargent was a beloved American artist who, like many others, was seduced by the incredible beauty of Italy. Of course, he shared an intimate connection to Italy as he was born in Florence to American expatriates. His watercolors have a rather mesmerizing fluid effect that served well to indulge his affinity for natural and architectural depictions in a rather lyrical manner.

In this painting, Sargent depicts a view of the sculpture of Daphne in the garden of the Villa Varramista in Tuscany, Italy. The sculpture is featured in a section of the exquisite Renaissance garden designed and implemented by venerated artist and sculptor, Bartolomeo Ammannati. The depiction of Daphne is resplendent with her arms thrown towards the sky as she perches atop a pedestal in a gesture that demonstrates utmost passion. Behind the magnificent sculpture are a couple of tall Cyprus trees under a darkening sky.

Adrien-Jean Le Mayeur de Merprès was an Impressionist from Belgium who is best known for his extensive oeuvre depicting the beautiful Indonesian island of Bali. His later works present several variations of the exquisite Balinese gardens, complete with vibrant blooms, graceful dancers, water features, and the varying effects of light weaving through tropical foliage.

This painting is typical of La Mayeur’s later works that celebrate the exuberance of the island. Legong dancers engage in a graceful dance around a lotus pond carrying various traditional props with them. The pond is surrounded by Balinese sculptures of apsaras or heavenly dancers that are installed around the edges. Leaves and flowers completely envelop the composition and the effect is multiplied by the shadows cast as the light scatters through.

Paul Cézanne was noted for his landscapes and still life paintings and also the accomplished portraits of his later period. His works from the 1870s reveal the profound influence of the Impressionists on his aesthetic. He created a significant body of works that is distinguished by heavy textures, exuberant colors, and liberal brushstrokes. Like many other artists, he enjoyed painting outdoors.

Cézanne’s father bought a large country house and farm, named Jas de Bouffan, that is located just outside Aix-en-Provence in Southern France. He loved this home and its beautiful surroundings dearly and they inspired him to create several masterful watercolors and oil paintings. In this adaptation, Cézanne depicts the view by the pool on a warm summer day. Perhaps the most striking feature of the painting is the vivid reflection of the surroundings in the large pool. The painting emanates sunshine, warmth, and a very strong sense of tranquility.