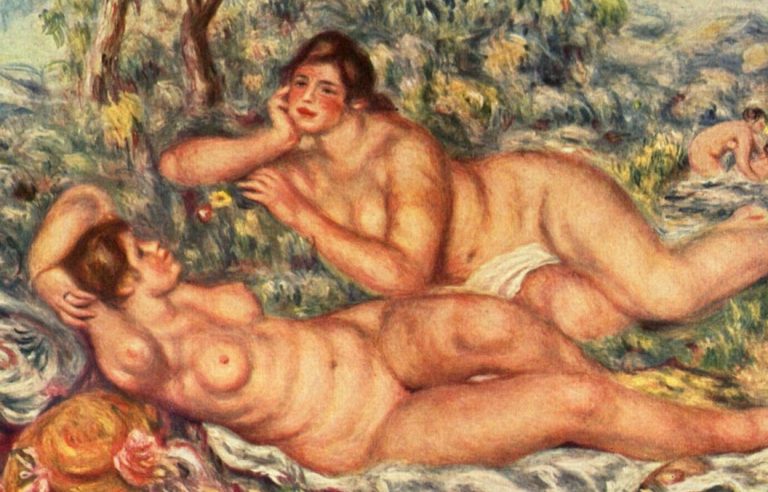 Pierre-Auguste Renoir is considered to be one of the masters of the Impressionist style. However, there are some of Renoir’s paintings that seem to be – to say the least – not that good. Let’s have a look.

We all love Impressionists and usually when we think of their works we see images like this:

You know, calm, colorful, and vibrating paintings of water, fields, cities. Subjects that are painted in a broad, rapid style, with easily recognizable brushstrokes and bright colors. The term “Impressionism” comes from a painting by Claude Monet called Impression, soleil levant (Impression, Sunrise), which he exhibited at the Parisian Salon. An art critic saw the exhibition and wrote a review in which he said that all the paintings were just “impressions”.

Among Renoir’s paintings, we don’t expect to see subliminal advertising of Michelin tires:

or a piece of human flesh put on a salad of seaweed:

or a woman with a lizard face, thigh-size neck, and a hat in the form of a flying saucer:

or a boy with hands bigger than his head. Did they swell because he’d played Angry Birds on his iPhone for too long? What about his enormous arms? Were they stung by a swarm of bees?

This woman from Renoir’s painting is supposed to be wearing a blue blouse – I bet she owned one but it seems she must have left it in the closet on the day Renoir painted her. Renoir was sometimes really horrible with human faces and body proportions. His people usually look like sacks of potatoes glued to tiny heads.

In the United States, there is a movement that requests the removal of all of the literally awful Renoir paintings hanging in the National Gallery in Washington DC. In 2015 they protested in front of a couple of US Museums. Now you know why!