Santiago Rusiñol i Prats was a prolific painter, draftsman, playwright, novelist, poet, and cultural activist from the late 19th and early 20th centuries. His paintings depicted a multitude of popular subjects of the time, and are distinguished by a sense of stillness along with a touch of melancholy. He was an ardent proponent of his local art community and is regarded as one of the leaders of the modernist period in Catalonia, known as Modernisme. Rusiñol has been credited with the implementation of two iconic meeting places for artists, the Festes Modernistes in Sitges and Els Quatre Gats in Barcelona.

Santiago Rusiñol was born on February 25, 1861, to a wealthy family in Barcelona. His father owned a successful textile mill where he briefly worked, before breaking with his family’s industrial tradition to take up painting. He got married and had a daughter, though for ten long years he was likely estranged from them. It took a debilitating addiction to morphine and failing health as a result, for the family ties to be renewed.

Rusinol first formal training in art was at the Academia de Bellas Artes at La Lonja under the instruction of Tomás Moragas.

Rusiñol’s early works depicted Orientalist and historical themes, and he evolved to urban and landscape scenes around the 1880s. He exhibited his early works with Catalan Olat-style artists. The Catalan Olat demonstrates the influence of the French Barbizon School, however, unlike the Barbizon paintings, these works sometimes included figures in the landscapes. The inclusion of sparse or solitary figures in scenic illustrations imbibed a sense of haunting realism and melancholy that characterizes a lot of Rusiñol’s works.

Rusiñol spent a significant time in Paris, France, including several brief visits and some extended stays. He honed his artistic skills and learned new techniques with both formal training and the influence of his contemporaries.

In the 1890s, Rusiñol took up residence in Montmartre along with his dear friend and fellow artist, Ramon Casas. They became members of Société des Artistes Indépendants. The pair enjoyed a very active social life in the artistic circles of Paris and came to be regarded as leaders of the Catalan expatriates in Paris.

Rusiñol and Casas frequented the famous bohemian café, Le Chat Noir, and became close friends with its founder, Rodolphe Salis. It was during these years that Rusiñol also met the famous German-French art dealer, Siegfried Bing who exhibited his works at L’Art Nouveau Gallery.

Rusiñol’s paintings of this time comprise urban themes, interior and exterior depictions, landscapes, and portraits. They evidence an Impressionist influence in the adaption of the quickened brushstrokes, albeit in a subdued tonality that was inspired by the works of Edgar Degas, and Gilded Age artist, James Abbot McNeil Whistler.

During his final extended stay in Paris, Rusiñol lived in an apartment on Île Saint-Louis. This phase of his life and career marks a transition from Naturalist or Realist depictions to more Idealist compositions. There was also a marked shift from the grey tones of the Montmartre period to brighter hues. The artist demonstrated an interest in Symbolism that extended to the consumption of Symbolist literature and his own writings.

Rusiñol became a member of the Paris Salon in 1908.

Early in his career, Rusiñol exhibited his works at Sala Parés in Barcelona. His works demonstrated his French training and inspiration, which became the cause of some negative reception. Over the years, however, Rusiñol rehabilitated and firmly established his reputation as one of the leading proponents of Modernisme in Barcelona and fundamentally influenced the art scene in Catalonia.

Along with his contemporaries Pere Romeu, Ramon Casas, and Miguel Utrillo, Rusiñol founded the Els Quatre Gats café in Barcelona in June 1897. It was inspired by and modeled after La Chat Café and also served as a cabaret, pub, restaurant, and hostel. It intended to provide a meeting place for like-minded creative folk from in and around Barcelona, such as artists, writers, architects, and more, and its list of patrons included Pablo Picasso. Els Quatre Gats became a hub for Modernisme.

After a visit to Sitges, 35 miles southwest of Barcelona, Rusiñol purchased a home there around 1894 and named it El Cau Ferrat, or the Iron Den. Rusiñol used this home to display his significant collection of Catalan metal works, and other breathtaking artifacts including glasswork, paintings, drawings, and sculptures. The artifacts from El Cau Ferrat are now part of the Cau Ferrat Museum collection.

Sitges had great sway over Rusiñol with its incredible natural beauty, and it was here that he came into contact with the Escola Luminista group of painters. Between 1892 and 1899, Rusiñol hosted five Festes Modernistes or Modernist Festivals at El Cau Ferrat.

Festes Modernistes was a vibrant festival that provided exhibition and performance opportunities for artists, musicians, and writers from all over the world.

Many of Rusiñol’s earlier compositions feature either a couple of figures scattered into places of insignificance or sometimes a solitary figure in a corner of the painting. The figures either bear expressions or body stances signifying unease or a distaste for their circumstances or surroundings. They serve to highlight the melancholy that is so evident in many of Rusiñol’s works. Figures were largely absent from his later works.

The Love for Spanish Gardens

Rusiñol’s financial success as an artist – as well as his family wealth – allowed him the freedom to paint compositions that were closest to his heart, such as Spain’s natural landscapes and planned Nasrid gardens. Nasrid Gardens were formal parterres attributed to the Nasrid dynasty in Spain. These gardens were usually distinguished by an opulent combination of painstakingly pruned plants, water features, and architectural elements (similar to Persian and Mughal gardens).

After a trip to Granada in 1897, and thereafter following extensive travels all over Spain, Rusiñol became the painter of Catalan gardens. He created an extensive artistic record of all of the scenic gardens, and natural landscapes he visited during his travels and imbibed in these works the same sense of quietude and melancholic undertone that was his trademark. 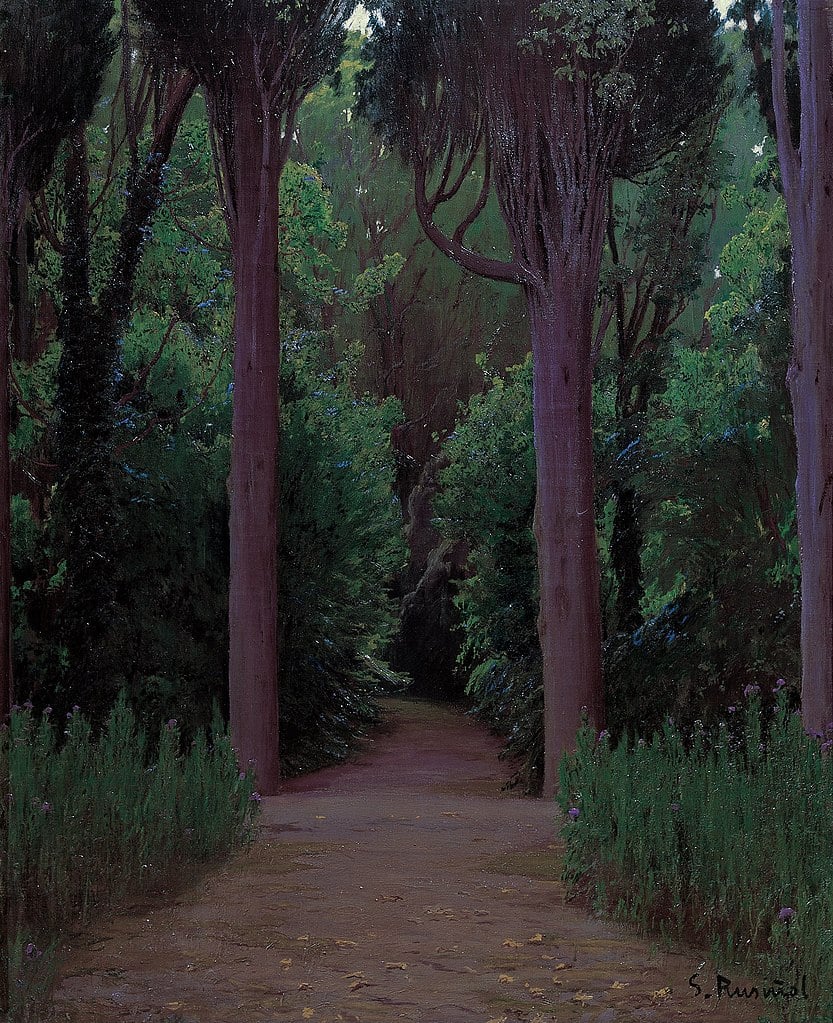 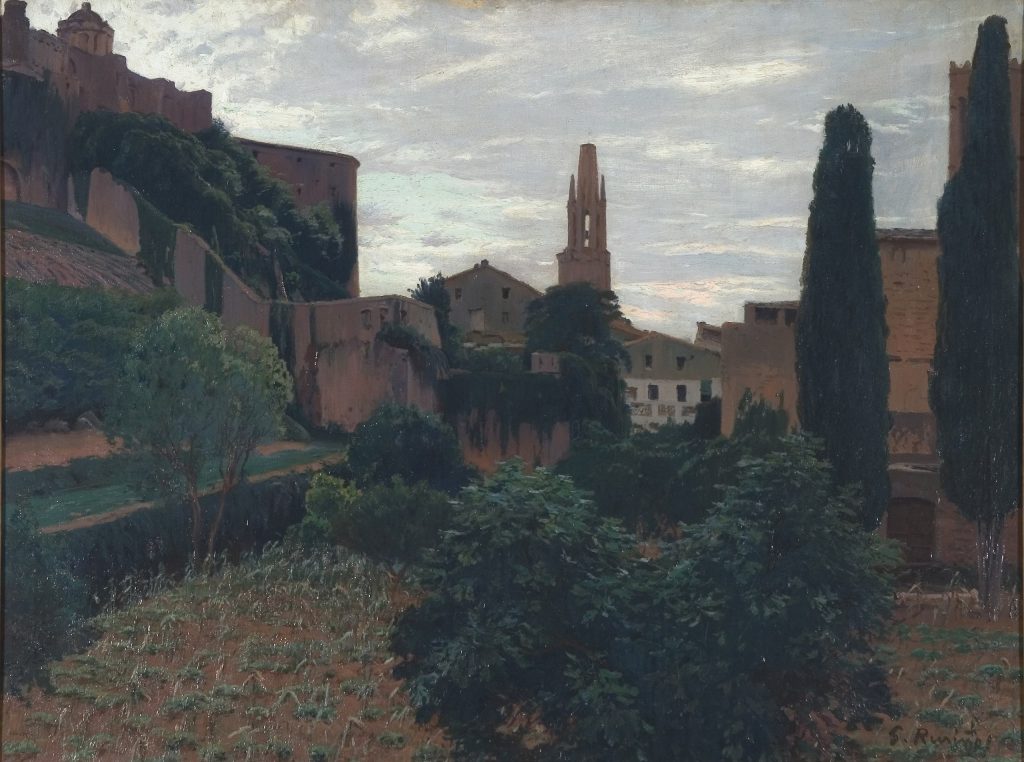 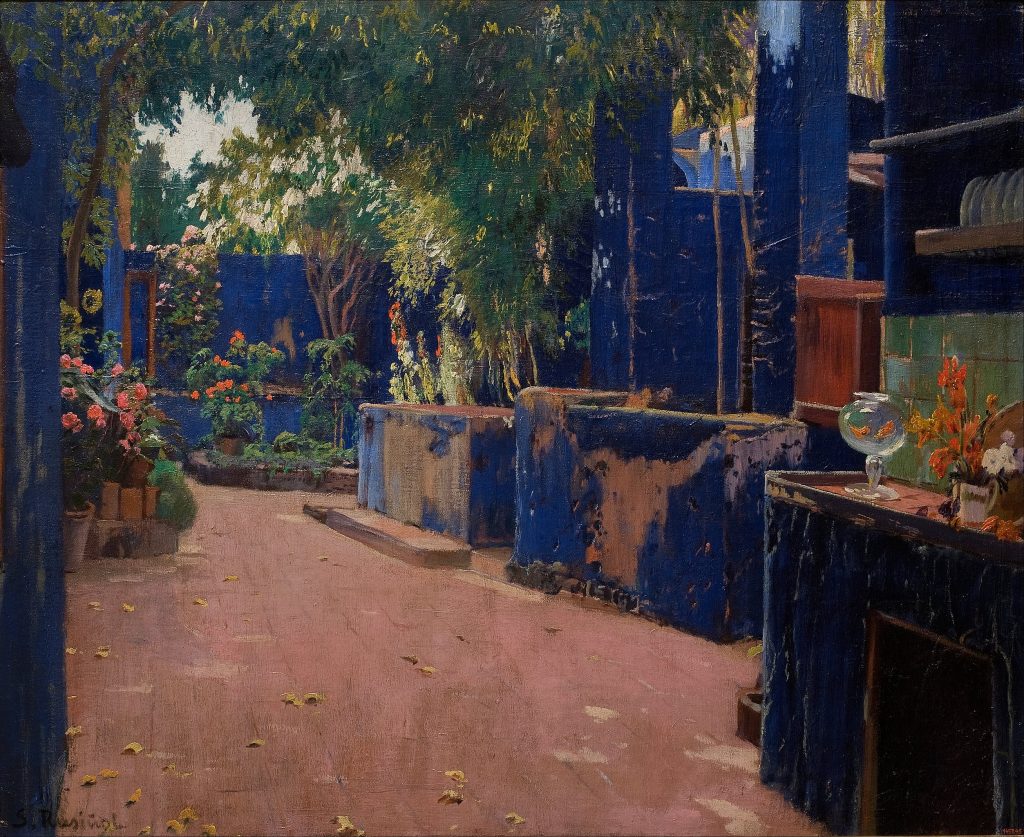 Footpath in a Park

In this painting, Rusiñol depicts a garden path leading into a forest.  Purple and blue flowers line the path making for an inviting albeit slightly foreboding unknown.

Rusiñol’s painting depicts a subdued view of Girona with an air of intended dreariness.

Although these paintings were very well-received during his lifetime and earned him great renown, critics presently believe these to be the weakest of Rusiñol’s oeuvre as he was struggling with arthritis at this time. 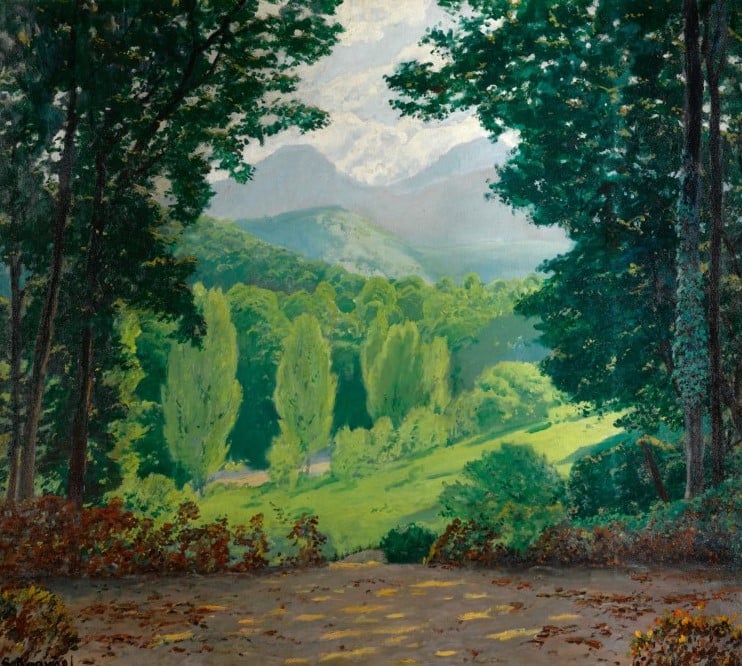 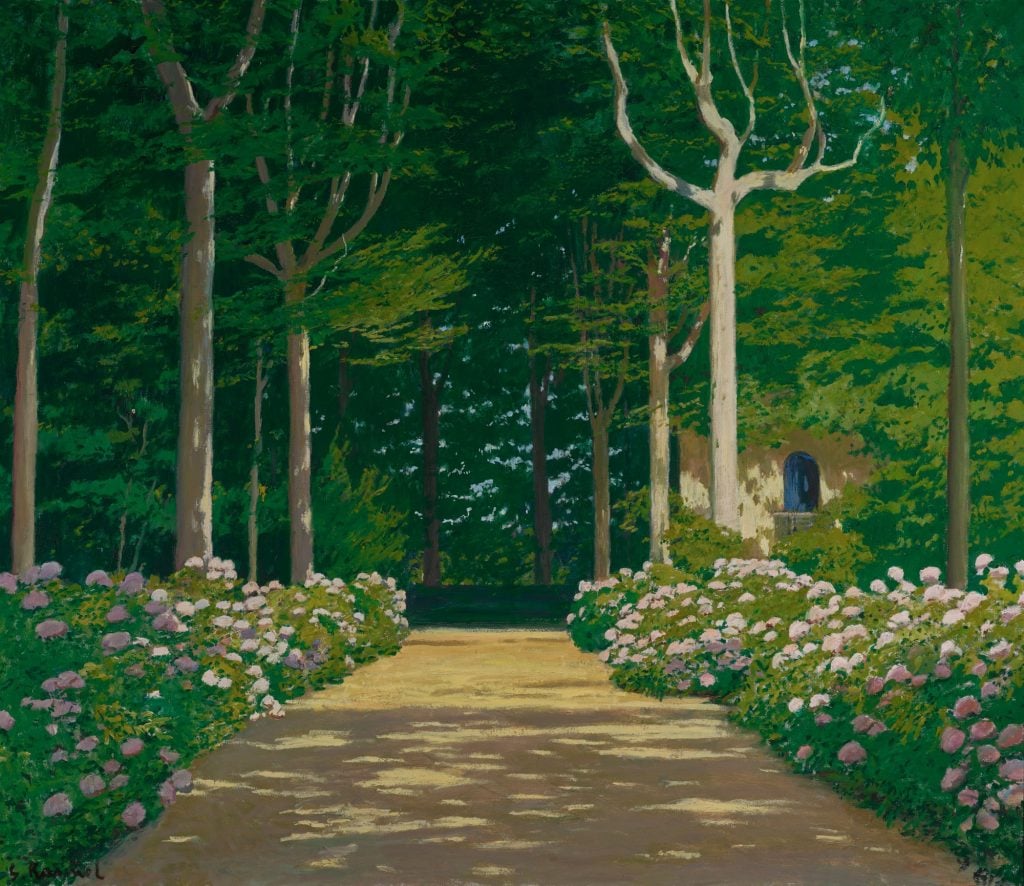 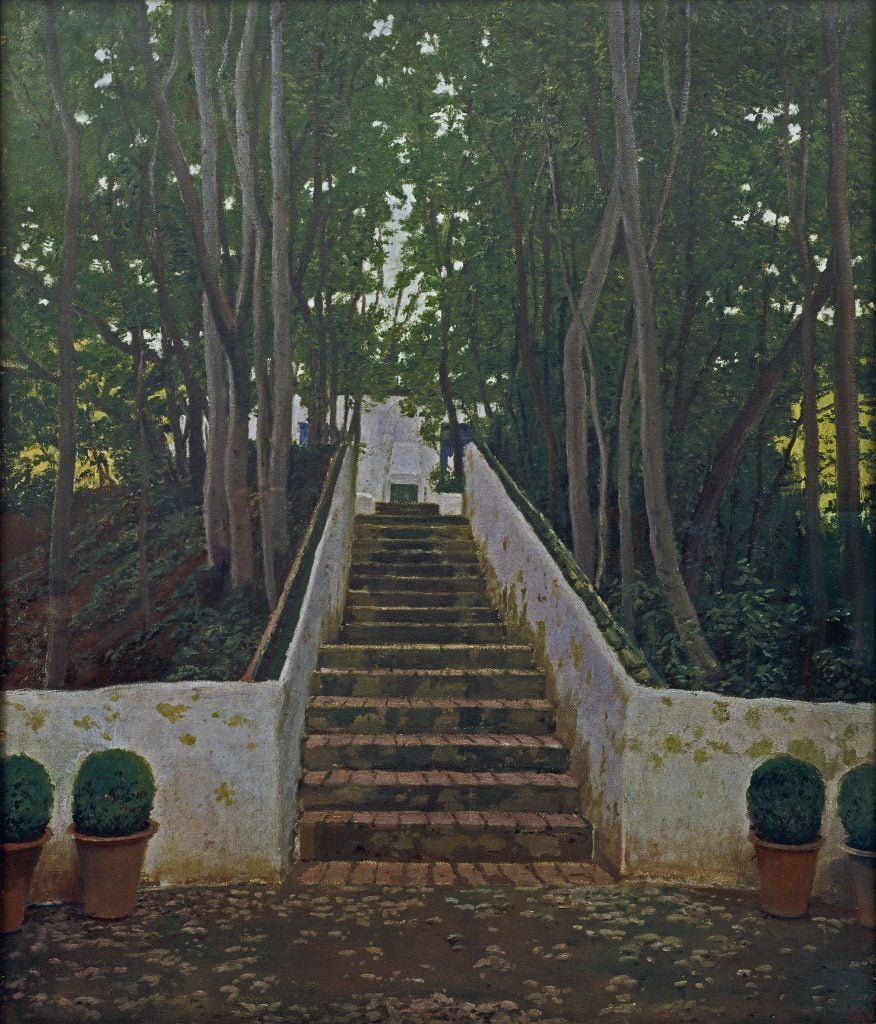 An opening in the trees revel a sloped mountainous terrain under a lush green cover.

Hydrangeas on a Garden Path

A burst of hydrangeas line a garden path to a shadowy intersection.

This composition depicts the base of a somber tree lined stairway leading up into unidentified architecture.

The Legacy of Rusiñol

Although Santiago Rusiñol was widely well-received, his contributions remain fairly unknown to a broader, international audience. In addition to his career in painting, he also indulged his other creative callings. He was an active writer and poet as well as a regular contributor to the Spanish newspaper, La Vanguardia. He also wrote several plays depicting drama and comedy, some of which were greatly successful. His artworks depict a highly emotional quality, which makes it quite apparent that there is a deeply thoughtful and complex man behind the paintbrush.