Claude Monet: Using the Home and Garden as Inspiration 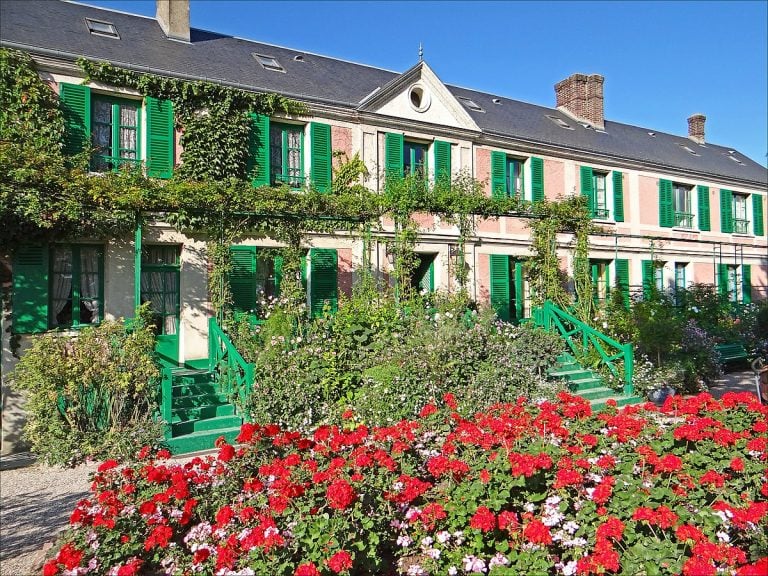 Claude Monet used his beautiful home and garden in Giverny, France, as the inspiration source for many of his paintings. We can all learn from the way that he recreated nature to produce some of the most beautiful paintings in the history of art.

A few summers ago, I visited Claude Monet’s House and Garden in Giverny, France. More than any other artist I know of, Monet used the surroundings of his home as inspiration for his artworks. He transformed the nature around him into paintings that would completely change the way we look at color and landscapes.

Claude Monet grew up in Le Havre in Normandy, France. Here, he gained a reputation as a landscape painter. At the start of his career, in 1862, he studied painting in Paris. He decided to focus on en plein air method, a process of painting outside in the open air. Following this, he briefly lived in London and then Paris again. Finally, he settled 50 miles from Paris in the countryside of Giverny. Importantly, the quiet surroundings offered the artist a chance to explore nature in its truest forms. Monet was a pioneer in the French Impressionism movement. To learn more about Impressionism and those involved, read this.

Furthermore, Monet lived here for 43 years from 1883 until his death in 1926. He enlarged the house to suit his tastes. He wished to create a space in which he could simultaneously live and paint. His studio was in a barn attached to the house with its own bedroom and a bathroom. He was constantly inspired to create. In fact, the house was decorated with paintings by the Impressionists for inspiration, such as Manet, Cézanne, Sisley, and others.

In addition, the photo above shows Monet’s first studio. This later became a smoking room where he hosted visiting art dealers, collectors, and critics. Although no original works by the artist are there today, the copies of his paintings presented throughout the house help us to understand how it would have looked when Monet lived there.

Monet’s Creation of the House

Subsequently, each room in Monet’s house is beautifully decorated. The house itself was an artistic project for him. Every room has the individuality, color, and uniqueness of a painting. The objects in the kitchen have been used to help replicate the original house.

Certainly, the interior design of each room was a creative task for Monet. Every detail, such as the wallpaper, paintings on the wall, furniture, and even the views from each window, is carefully thought-out. The house became a work of art that we can interact with today.

The Birthplace of the Water Lily Series

Crucially, Monet’s en plein air method meant that he spent most of his time painting in his garden. He favored the luscious and green outdoor space. This was to become the setting for some of his most famous paintings – the Water Lily series. This encompasses 250 large oil paintings that are now spread across galleries around the world.

Therefore, it is no surprise that visitors of Monet’s House immediately flock to the bridge to see the water lilies. 10 years after moving into the house, the artist decided to create an Asian-influenced water garden. To achieve this, he diverted water from a local river and then arranged flowers, bushes, and trees to create the exact look that he desired. In this way, the garden itself became a work of art. We are able to see exactly what inspired the artist. From the same point of view, as he once had, this is a rare and extraordinary experience.

Similarly, a reoccurring motif in his paintings is the bridge that crosses the pond. We can only wonder if Monet had any idea of how emblematic the image of this bridge would become. He chose this Japanese-style wooden bridge in 1895 and visitors to his house can still walk across it today. The most famous paintings including the bridge are in London at The National Gallery and in Washington at The National Gallery of Art.

Monet created such beauty even towards the end of his life, despite suffering from cataracts in both eyes aged 72. He had suffered from visual problems since 1905, giving him a unique perception of color. Art historians often refer to the artist’s “blue period” and “red period”. In general, we remember Monet today for his inventiveness with color.

Using the House and Garden for Inspiration

We can all admire the way that Monet once utilized his house and gardens. He dedicated a large part of his life to creating this space. Then, it became the basis for his art. Therefore, all of the inspiration that he needed was right on his doorstep. We can admire and recreate the beauty we see even in the most basic spaces around us.