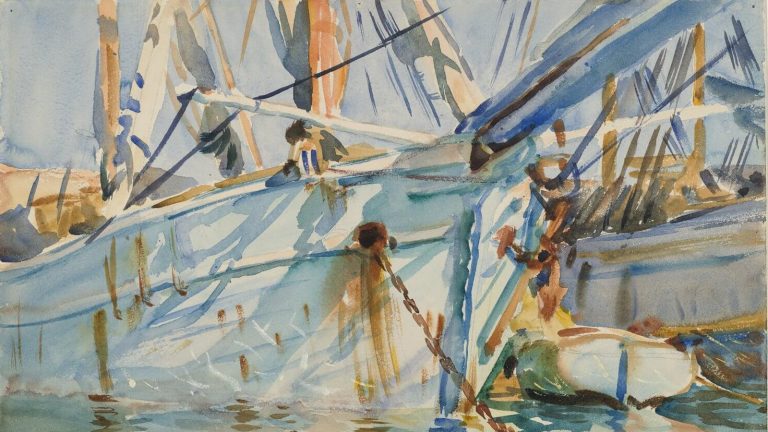 European-American painter John Singer Sargent (1856-1925) is remembered for his impressive, large-scale portraits of British, French, and American socialites, intellectuals, politicians, and other luminaries. Sargent’s watercolors, however, are much less known. Mainly painted during his countless voyages throughout Europe and the Middle East, they depict international people, places, and scenery in a colorful, vibrant, semi-modern aesthetic.

To live with Sargent’s water-colours is to live with sunshine captured and held.

Vigorous and dynamic, Sargent’s watercolors are similar in style to his oil paintings, but their casual tone, bright colors, and economical use of line give them a more modern feeling. In particular, the soft brushwork and emphasis on light feel are strongly related to Impressionism. Sargent occupies an uncertain place in relation to modern art in general. He considered himself a traditionalist, and his focus on society portraiture was hardly avant-garde. However, his free and dynamic way of painting undeniably connects him to Impressionism and other forms of Modernism contemporary with him.

Sargent painted in watercolor from a young age and used the medium throughout his entire career. Earlier examples like those from the 1880s are often more somber in tone and closer to traditional 19th-century watercolors than his later efforts. They are nowhere near as noteworthy as his 20th-century watercolors, whose experimental compositions sometimes seem to approach abstraction.

Around 1902, Sargent turned to watercolor as a major focus when he swore off oil portraits. He took up charcoal portraits, another under-appreciated area of his oeuvre, around the same time. With the newfound financial security that enabled him to renounce portraiture and the freedom the decision gained him, Sargent traveled even more than before and made countless watercolors along the way.

In his watercolors, Sargent’s characteristic virtuoso displays of portraying frilly gowns and elegant furnishings are replaced with leafy green vegetation, brilliant sunlight, and shining white marble. Smaller and simpler than his oil paintings, Sargent’s watercolors strip away all but the essentials while remaining visually complex and filled with bright color. Although they may not seem so today, Sargent’s watercolors were innovative in his time. This was partly because he used watercolor in much the same manner he did oil paint; the two media have very different textures. Employing gouache (opaque watercolors) and wax resist (a substance used to create surface texture and preserve areas of white paper) in addition to more common transparent watercolors, he built up thick brushstrokes (impasto) the way he did in oil paint. From photographs, it can be difficult to distinguish Sargent’s watercolors from his quick oil sketches, which were stylistically similar.

His complex compositional choices were equally unexpected, employing unusual viewpoints and cropping like that associated with the Impressionists. Although they seem random, as viewpoints often can be during travel, they are anything but accidental. Despite loving to paint en plein air, which requires a decisiveness Sargent excelled in, he was not casual about any aspect of his art. The artist also used graphite pencil or charcoal to add details and reinforce forms, and he often left strategic areas of blank paper. Just as in his oil paintings, some areas are highly detailed and tightly composed, while others are given only the most cursory treatment. Which areas of the subject are given which treatment may be rather surprising.

Sargent was a prolific world traveler, and many of his watercolors depict sights he saw in Europe, the Holy Land, and the Mediterranean. They show the scenery, landscapes, architecture, and locals, as well as the friends and family who accompanied him. The most interesting examples depict Bedouins in North Africa, architecture in Venice, and marble quarries in Carrara, Italy; he painted all three of these subjects extensively. It would be easy to see these works as mere preparatory sketches – quick ways for Sargent to record distant scenery for later use. After all, traveling artists have made such visual notations for centuries. However, art historian Teresa Carbone claims otherwise, saying that “they were really an extension of his most serious aesthetic concerns”.1

Sargent’s Watercolors in Brooklyn and Boston

The Brooklyn Museum and Museum of Fine Arts Boston own the two biggest collections of Sargent’s watercolors anywhere in the world. The museums acquired these watercolors from the Knoedler Gallery after exhibitions in 1909 (Brooklyn selection) and 1912 (Boston selection). Accordingly, the two sets depict different themes and locales. Initially, however, Sargent was reluctant to part with his collection of watercolors, preferring to keep them close for his own enjoyment and as a body of work to exhibit whenever he wanted.

The two museums exhibited their joint holdings together for the first time in 2013-14, showing about 90 artworks, including some related oil paintings in addition to the watercolors. However, Sargent made several hundred watercolors throughout his career, and many significant American museums own a few. Additionally, Sargent’s watercolors routinely appear in a variety of special exhibitions dedicated to the artist, the Gilded Age, and watercolor in American art. Pay attention to exhibitions announcements, and you’ll likely find many chances to see them.