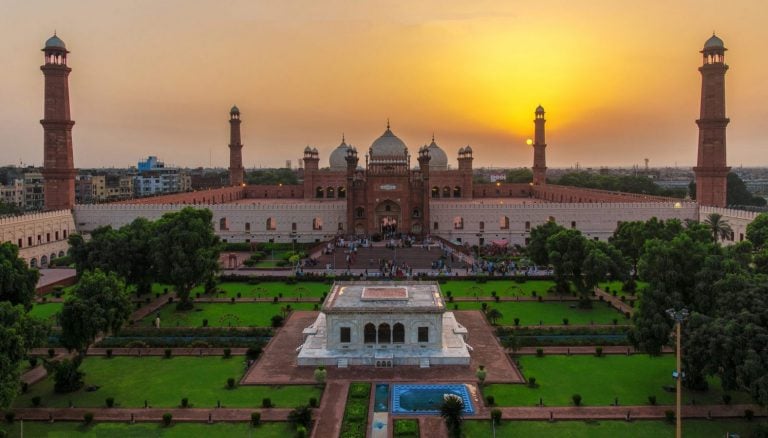 The Mughal regime is a well-documented era and the cultural achievements of this period are an important landmark in South Asian art history. While the awe-inspiring buildings, tombs, and mausoleums of this period are renowned for their grand scale and impeccable detail, equally significant among the contributions of the Mughal emperors were breathtaking charbagh style gardens, known also as the Mughals gardens.

The Mughals built gardens in South Asia all throughout the 17th and 18th centuries. These were not merely wild meadows or orchards but carefully contemplated designs that organized natural elements in geometrically precise composition. These gardens added a grand sense of refinement or “curb appeal” to the landscape of the Mughal regime. The gardens at the Taj Mahal in Agra and Humayun’s Tomb in New Delhi are among the most significant Mughal gardens. The Mughal garden architecture is directly derived from the Persian charbagh tradition.

Paradise, As a Garden

The notion of heaven as a garden has been around since ancient times. The earliest known description of a primordial garden appeared in ancient Sumerian texts. The word “paradise” finds its roots in the Old Persian word pairidaeza, which refers to a walled enclosure containing a park or garden. This word or close variations of it have also appeared in Hebrew, Aramaic, and Greek.

The Garden of Eden, described in the Book of Genesis, is believed to be God’s contemplation of perfection and the closest thing to heaven on earth. It possibly introduced the importance of gardens to Abrahamic religions. Subsequently, the Quran exemplified the notion of paradise as a garden, making several references to jannat al-firdaus or the gardens of paradise. That is to say, the Quran describes heaven as an allegorical garden within which the worthy dwell for eternity.

The charbagh or “four gardens” layout is a reference to the four gardens of paradise described in the Quran. This concept gave rise to a highly structured method of landscape organization that was popularized in the Persia of antiquity. One of the hallmarks of the charbagh is the four-part layout with axial paths that intersect at the very center. Additionally, beautiful walkways or elaborate water features divide the charbagh sections into smaller parts. These gardens give evidence of the influence of Zoroastrianism, with a heavy emphasis on the elements of nature.

Gardens are often contemplated as places of respite from the hustle and bustle of life and a retreat from the world. Mughal gardens also were intended as an oasis and shelter from the harsh elements as well as a place to be closer to God. An inward orientation and a walled enclosure are important aspects of Mughal gardens.

Water and shade also play an important role in Mughal garden architecture. Running streams of water, fountains, and shade from the heat were undoubtedly valued by the early adherents of a religion that was born in the desert. Sophisticated irrigation systems were employed to provide running water and reflecting pools. These reflecting pools also magnified the effect of the breathtaking monuments set within. Ornate pavilions and shamianas adorned these gardens to provide shade from the heat.

Muhammad Zahir al-Din Babur, the founder of the Mughal empire imported the concept of Persian gardens to South Asia around 1526 CE. After Babur’s conquest of Hindustan in 1526, his first course of action was to commission the planned charbagh style gardens in an attempt to replicate the gardens from his ancestral land of the Fargana Valley in Uzbekistan. Subsequent Mughal emperors shared the passion of their founder and ordered the construction of many more such gardens. Though the tradition and the layout remained approximately the same, each emperor added their unique touch to their commissions. Akbar, for example, favored riverfront gardens over the walled gardens of his grandfather.

It is believed that Mughal emperors greatly enjoyed gardens and spent significant time in them. Many Mughal miniature paintings are set outdoors and provide a fascinating glimpse into how these gardens looked during the Mughal era. For example, the paintings depict walled gardens, waterworks, and lush fauna and flora. The royal subjects are depicted under beautiful shamianas, along with ornate carpets, perhaps a homage to the nomadic origins of the Mughals.

Given the preference for aniconism and non-pictorial decor in Islam, vegetal patterns along with idealized landscape design were a popular design theme among the Mughals. The recurring floral and vegetal motifs are apparent in all realms of Mughal art, architecture, and textiles. Both Jahangir and Shah Jahan were known to greatly enjoy floral patterns.

Though Mughal gardens often enveloped the monuments within, the gardens were by no means any less significant. They were as carefully contemplated as the palaces, forts, mausoleums, and mosques that they encompassed. The Mughals also created gardens independent of monuments, to serve as places of rest for the nobility, and for weary merchants and travelers. Mughal gardens continue to attract both tourists and city dwellers. They are maintained by local and central governments of India and Pakistan as relics of this golden age in South Asian history.