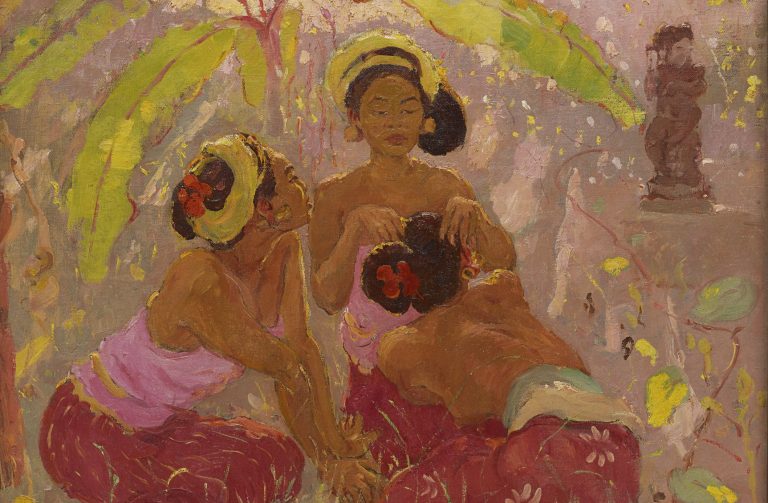 Let’s Ride a Tiger! Escape into the Tropics with Henri Rousseau

Adrien-Jean Le Mayeur de Merprès, better known as Jean Le Mayeur was a skilled Impressionist who was active around the early 20th century. Originally from Belgium, Le Mayeur traveled extensively and reconstructed his incredible voyages in paintings. His greatest artistic legacy is a consequential body of works dedicated to the tropical paradise island of Bali, Indonesia.

Jean Le Mayeur was born in Ixelles, Brussels in the year 1880. His father, Andrien Le Mayeur De Merpres was a painter and perhaps a significant early influence in his life. He studied painting at an early age, however at his father’s insistence he attended the Polytechnic College of The Université Libre de Bruxelles, where he majored in Architecture and Civil Engineering. Against the wishes of his family, Le Mayeur pursued an artistic career after graduating from university.

During World War I, Le Mayeur became an army painter and battlefield photographer. After the war ended, he embarked on extensive travels and it was during this time that his oeuvre really emerged. He initially left Belgium to live in Marseille and St. Tropez in France and then spent some time in Venice, Italy. In the early 1920s, he traveled to Turkey, Morocco, Tunisia, Madagascar, Burma, India, and Cambodia. He was able to travel and live as he pleased because his considerable family wealth was sufficient to support his enviable traveler-painter lifestyle.

Inspired by the travels of Paul Gauguin, Le Mayeur visited Tahiti in 1929, however, he was disappointed to find that the beauty of the Polynesian culture was in decline by the time got there. The same year, he traveled further east and made his first visit to the Indonesian isle of Bali, the fabled island of gods.

Moving to the Island of Gods

Bali is one of the best-known islands of the large Indonesian archipelago. It is a tropical paradise with extraordinary landscapes, lush tropical greens, incredible beaches, and vibrant religious traditions rooted in Balinese Hinduism. Le Mayeur was completely enthralled by both the culture and the incredible natural beauty. He left Europe and made a second voyage to Bali at the age of 52 with the intention to make it his home. In 1932, he arrived by boat at Singaraja in the Bulueng province in the northern part of the island. He made his way south to Banjar Kelandis, located close to Denpasar, and rented a house there.

In Bali, Le Mayeur met and fell in love with Ni Wayan Pollok Tjoeglik, a 15-year-old Legong dancer who was 37 years his junior. Ni Pollok became his lifelong muse and model. In 1933, his paintings, largely featuring Ni Pollok, were exhibited at the YMCA in Singapore. The exhibition was a great commercial success. Le Mayeur then used the proceeds to purchase land at Sanur Beach in the southeast of Bali, where he built a beautiful ocean-facing home and studio. Villa Le Mayeur, as it came to be known, featured a gorgeous courtyard and garden full of flowers and palm trees.

In 1935, Le Mayeur married Ni Pollok in a traditional Balinese ceremony. She retired as a dancer and served as her husband’s model for over 25 years. Ni Pollok is the subject of several of Le Mayeur’s works.

During the Japanese Occupation between 1942 and 1945, Le Mayeur was placed under house arrest, and painted feverishly during this time. When he eventually ran out of canvas he painted on any available surface. In the years that followed, Villa Le Mayeur became immensely popular and the couple became well-known for their gracious hospitality at the seaside cottage. Further, exhibitions in the Southeast Asian region earned Le Mayeur international acclaim.

Le Mayeur returned to Brussels in 1958 and was diagnosed with ear cancer. He passed away the same year and was laid to rest in the Ixelles cemetery. After the passing of her husband, Ni Pollok married again, but her second husband was an expatriate from Italy who was forced to leave Indonesia not long afterward. She spent the rest of her life at a cottage in Samur until she passed away at the age of 70.

Le Mayeur’s early works mostly comprised Belgian landscapes and his early travels displayed an Orientalist inclination. He was a self-proclaimed Impressionist, and all his works bear the recognizable hazy Impressionist hues. The Balinese works form a significant part of his oeuvre and were, in particular, absolutely captivating! These paintings depicted a set of recurring motifs, arranged in different variations and forms. They all shared the vision of an exuberant tropical paradise full of lush foliage, trees, and flowers. Architectural structures such as terraces, pergolas, ponds, and statuary often accompanied these scenes. Particularly noteworthy was Le Mayeur’s portrayal of sunlight weaving in and out of the various objects present in his composition, creating a mesmerizing interplay between light and shadow. Dancers in traditional garb are also featured in many of his works.

Most of what is known about Le Mayeur is on account of extensive studies by art historians Dr. Job Ubbens and Cathinka Huizing, who are perhaps the foremost authority on Jean Le Mayeur. His paintings were a tremendous commercial success and made their way into collections all over the world. Meanwhile, Villa Le Mayeur at Sanur is now a museum run by the Indonesian Government.

Cattedrale di Santa Maria del Fiore, or the Duomo of Florence, along with Giotto’s Campanile and Baptistery of Saint John are designated UNESCO...