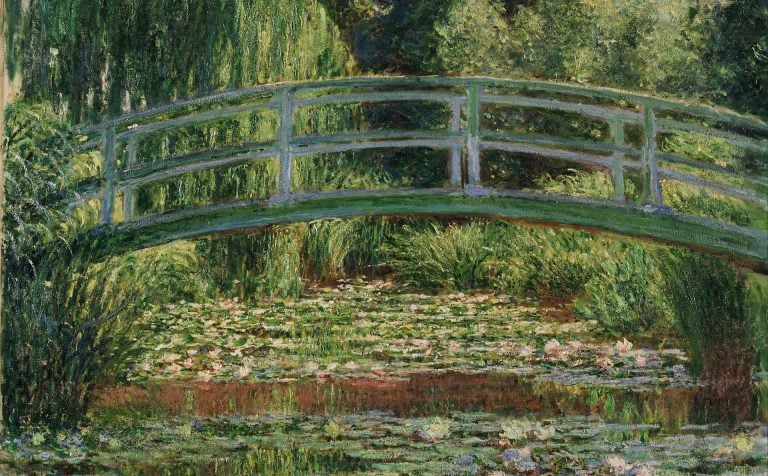 Doesn’t matter if you have a garden, a balcony, a terrace, or just a window sill on which you keep a small cactus. These gardens in art are like nothing you’ve seen before. Prepare for a thrust of floral power:

Claude Monet moved to Giverny with his family in 1883. At that point a middle-aged man, Monet would spend hours in his garden, gardening or painting. He was largely inspired by Japanese gardens and he installed a Japanese bridge which was even featured in his paintings. When his beloved wife Alice died, he directed all his love to the flowers and rarely left his estate.

2. The Hanging Gardens of Babylon

They were one of the Seven Wonders of the Ancient World although nobody knows where they truly were located. Legend says that they were built in Babylon by king Nebuchadnezzar II around 600BCE for his wife, queen Amytis. She had originally come from Media (north-west of Iran) and she missed her homeland’s green hills and valleys. Therefore, the king ordered the construction of artificially tiered ascending gardens, which eventually would be like a green mountain. Some people say that the gardens never existed and they are just a romanticized vision created by ancient writers.

The garden adjacent to the western wall of the Palace of Versailles covers over 800 hectares of land and its creation required an immense amount of effort. The king’s first designer, André Le Nôtre, needed thousands of workers who would transport and shift the earth for flowerbeds, plant trees brought from all over France, dig up water canals and build the Orangerie. Imagine that before this stunning gardening enterprise the entire land had been covered in woods, marshes and swamps! It took 40 years to complete all the work.

William Kent was a truly comprehensive man as he was a painter, an interior designer and possibly the first landscape architect. Inspired by the poetry of Alexander Pope, Kent strove to create a more relaxed and idealized garden style, as opposed to the more symmetrical and formal French style. He relied on vistas by Claude Lorrain and Nicolas Poussin, as well as the descriptions of Chinese gardens provided by European travelers in order to create an idyllic landscape. Therefore, in the English gardens, one could find a Gothic ruin, a pond, a bridge, a recreation of a classical temple and many swirling pathways for afternoon strolls.

5. The Garden of Eden

Although the Garden of Eden is believed to be only a mythological creation, some scholars tried to locate it in southern Mesopotamia (now Iran), where the rivers Tigris and Euphrates run into the sea, or in Armenia. It was believed to be an ideal place where first people lived in harmony with nature. Breughel and Rubens show Eden just before the catastrophe when Adam and Eve taste the fruit of knowledge.