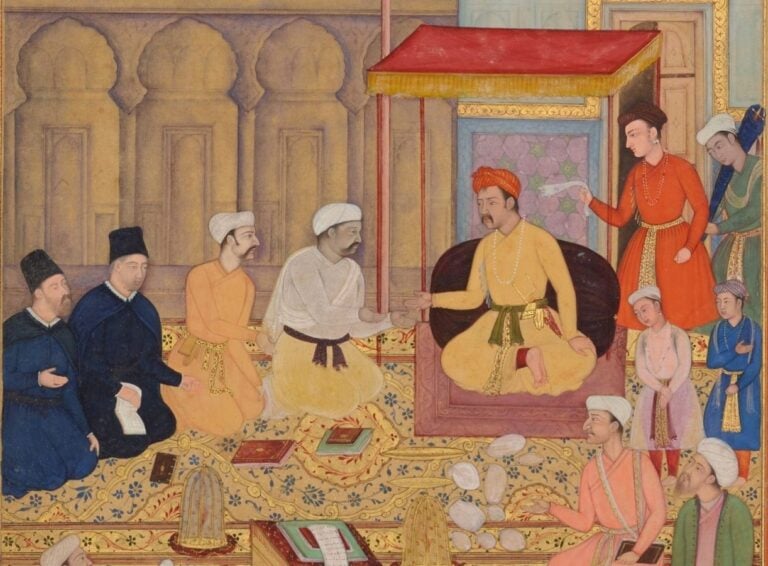 The Mughals descended from a lineage of formidable conquerors such as Genghis Khan and Amir Timur. They were themselves the most dominant force in Asia between 1526 and 1858. The Mughal empire spanned across modern-day India, Pakistan, and Afghanistan. However, the Mughal emperors were not only known for their power and military might but also as great patrons of the arts. This dynasty pioneered a grand tradition of art forms including miniature paintings that continues to captivate the world today.

Mughal Investment into the Arts

The 16th to the 18th centuries were an era of great opulence in South Asia. It is estimated that Emperor Abkar’s net worth at his peak would translate to a staggering $21 trillion today, with control over 25% of the world’s GDP! Money was generously diverted to the arts and artists thrived under the Mughal rulers. In addition to the miniatures, Mughal art included lavish architecture (such as the Taj Mahal, Humayun’s Tomb) as well as immaculately manicured gardens (Shalimar gardens, Verinag spring, etc.), and these were often portrayed in the miniature paintings.

An Amalgamation of Persian & Indian Style

While Akbar is usually credited for establishing Mughal miniature art in India, it was his father Humayun who acquired painters Mir Sayyid Ali and Abdus Samad Khan from the Persian court during his exile in 1540. These painters founded an academy of over 100 painters and artists from various parts of India who went on to create extraordinary works under Mughal patronage. The Persian influence is apparent both in the miniature medium itself and in the delicate and fine lines of the Nasta’liq script. However, Mughal miniatures are truly a blend of both Indian and Persian styles distinct from the Safavid form.

Creation of a Miniature Painting

The subjects of the paintings were usually (though not always) secular in form and covered a wide range of topics that included court scenes, battle scenes, hunting scenes as well as portraitures. The illustrations were adorned with rich borders and immaculate calligraphy. The works are, as their name suggests, quite small but are full of an incredible level of detail. Some of these intricate details were obtained by the using brushes made of a single hair!

The miniatures were either in form of book illustrations or single works kept in albums and were essentially a product of an elaborate collaboration. Even where a painting is attributed to a specific artist, there have usually been many more persons involved in creating the art for different tasks, such as making the paint, priming the paper, calligraphy, outlining and coloring. A lot of careful labor went into creating these incredibly intricate works.

The Demise of the Mughal Era

Though not completely without artistic ambitions, Aurangzeb was an orthodox ruler and unlike his predecessors, did not invest as substantial an effort into the arts. The royal art academy disbanded under his reign and many of the artists took their talents and influence on to royal Rajput courts and the British East India Company. Efforts were undertaken by Aurangzeb’s descendants to revive the tradition, but neither the art form nor the dynasty survived the damage caused by Aurangzeb’s oppressive reign.

While there have been other Indian schools of miniaturist art predating Mughal miniatures and new schools that have thrived after the demise of the Mughal dynasty, the Mughal period was a landmark in the art history of the Indian subcontinent and is one of the two most recognized schools of Indian miniature art. The easy portability of miniatures enabled them to be easily traded from early times and gave them exposure all over the world.

Later in his life, Dutch master Rembrandt found inspiration from the miniatures and created a series of drawings based on Mughal portraits.