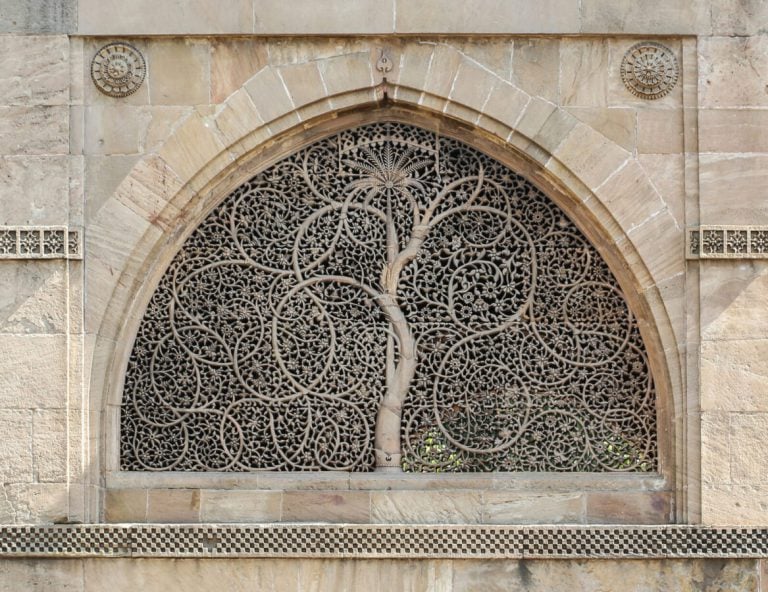 The jali, or pierced screens, have been extensively employed in Indian construction since time immemorial. They appear in both Hindu and Islamic architecture. These latticed and perforated slabs of wood or stone have been masterfully rendered by generations of skilled workers to serve as window coverings, room dividers, and railings for balconies. Although latticed screens or pierced stone screens are by no means exclusive to South Asian construction, they are a prominent architectural element greatly favored by the Mughal builders. The jali not only added artistic flair to the magnificent architectural wonders of this golden era of Indo-Islamic architecture. They also served practical purposes, such as allowing for the circulation of air, shelter from direct sunlight, as well as privacy.

The Mughal period was an era of great artistic and architectural achievement that left a lasting impression on South Asian art history. Mughal emperors were great patrons of the arts and the proponents of a grand tradition of architecture. The Taj Mahal, one of the most recognizable funerary monuments in the world, was commissioned by the fifth Mughal Emperor, Shah Jahan. Even Aurangzeb, who was the least artistically inclined emperor of this powerful dynasty, commissioned important monuments. These include the Badshahi Mosque in Lahore or Bibi ka Maqbara in Aurangabad.

Mughal construction combined elements of Persian design with Hindu Rajputana architecture. The buildings are usually made of red sandstone, marble, or some a combination of the two. Most Mughal monuments are identifiable by the bulbous Persian domes of red sandstone and the ornate archways. Their walls are adorned with extensive inlay work, usually including arabesque patterns, floral motifs, and Nasta’liq calligraphy of Quranic scripture. The buildings also feature minarets, decorative balconies known as jharokha, and of course the jali.

Skilled stonemasons were employed to painstakingly carve jali out of stone in a variety of zigzagging patterns of interlocking rosettes and crosses. The Mughal passion for arabesque and geometric patterns is exemplified in the jali. In early Mughal architecture under Akbar, the jali was usually of a simpler hexagonal and octagonal pattern. Meanwhile, under the reign of his grandson Shah Jahan, more plant and floral motifs were used. Mughal architects also added pietra dura inlay with semi-precious gemstone accents to the frame of the jali.

The Effect of Light

In the daytime, sunlight passing through the jali would cast a patterned silhouette on floors and walls inside, thereby creating a playful effect of light and shadow. Conversely, after dark the lanterns that illuminated the buildings from within would yield a glowing, romantic effect. Undoubtedly a grand sight to behold!

A primary non-aesthetic function of the jali was to lower the temperature of the room within. While the jali no doubt cuts down on direct sunlight, the temperature of the space within is also significantly cooled by air passing through the perforations in the wall. The passage of the air through the perforations allows for the release of hot air and for cool air to enter, thereby lowering the overall temperature inside. There is a perceptible difference in the temperature inside buildings that feature the jali. A mild wind outside can result in a significant breeze inside.

The jali has been used with great success in both dry and humid climates. In humid regions the perforations are larger in size. However, most of the Mughal empire spanned across dry regions. In these areas, smaller perforations were employed to keep the large structures cool.

The jali also aided in maintaining the privacy of the (fortunate) occupants of these buildings. From within, the outside world remained visible through the perforations, allowing a view of what was undoubtedly a lush Mughal garden. However, due to the difference in light, for a bystander on the outside the occupants of the buildings remained largely invisible.

Although the era of classical, medieval construction has unfortunately long been abandoned nearly everywhere, the tradition of jali remains a relevant architectural element from an environmental perspective. The use of jali and its cooling property makes it an environmentally sound option for proponents of sustainable architecture. In this day and age, of course, modifications have been made to appease modern sensibilities. Prefabricated lattice screens made of concrete or terracotta are readily available and continue to feature in South Asian construction today.

Read more about architectural marvels of the East: