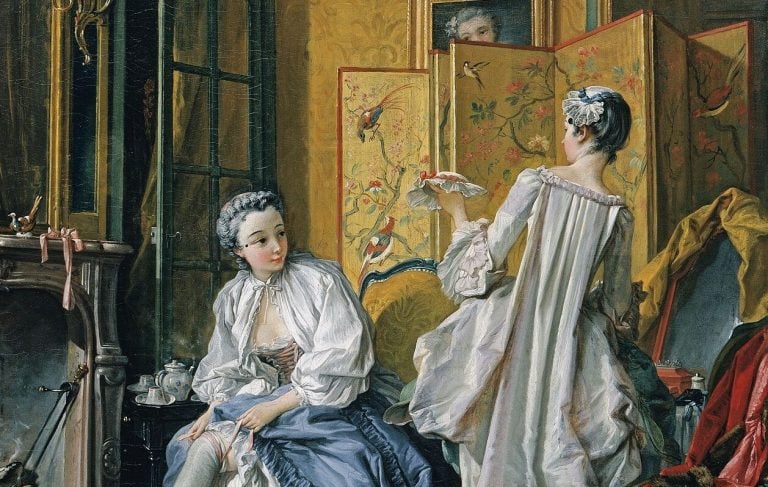 The soft rustle of silky cloth and the hard crackling of burning wood echo against the yellow papered walls of the boudoir. The small room is overflowing with sensual delights as two women perform a daily routine of dressing for the day ahead. A lady is being assisted by her maid amidst her worldly splendor and fashionable excess. Such a charming scene of grace, lightness, and sexuality can rarely be captured by an artist. However, François Boucher both easily and successfully captures such a scene in his La Toilette. It is a scene of luxurious normality and of voyeuristic experience. This is 18th century France captured, frozen, and displayed in the Museo Nacional Thyssen-Bornemisza of Madrid, Spain.

François Boucher defined his era. He practically created the Rococo style of mid-18th century France. Boucher became the most desired artist amongst the aristocracy and the royalty of France. However, the appeal of his paintings was not confined by France’s borders. There existed such an international market that even La Toilette was specifically commissioned by a diplomat. The Swedish Ambassador to France, Count Karl Gustan Tessin, commissioned and bought La Toilette in 1742 for his private collection in Sweden.

François Boucher first began his artistic ascent in 1723 when he won the famed Prix de Rome. He, like many other emerging artists, was sent to Italy to study the masters of the Italian Renaissance and to polish his skills. Boucher became instantly attracted to the colors and sparkle of the Venetian school, especially to Correggio and Tiepolo. This Venetian vibrancy strongly influenced his later style and gained him a membership in 1734 to the prestigious French institution of the Académie Royale de Peinture et de Sculpture. This prized membership later led him to aristocratic and royal patronage through the protection and guidance of King Louis XV’s mistress, Madame de Pompadour, from 1746 to 1764.

François Boucher was known as a painter of beautiful women, and La Toilette is no exception. Two women inhabit the painting with peaches-and-cream complexions and with fashionably blue-and-white outfits. The white of their dresses compliments the powder of their faces, and the pink of their blush complements the pink of their ribbons. All of their natural and artificial colors blend together into a dainty vision of enchantment.

On the left side of La Toilette, a lady sits on her chair while she ties her pink garter against her white stocking. Without this necessary task, the lady’s stockings would shockingly ride down while she walks. A sliver of pale naked flesh appears between the lady’s garter and the ruffled hem of the lady’s dress. It invites a sensuous stare to her enchanting curves and delicate limb. Her chest leans forward from the tying motion and exposes more pale flesh in the triangle of cloth framing her bosom.

The lady’s beauty and delicacy are intensified by her confident pose and relaxed attitude. She embraces her refined image of femininity. Her state of undress, or deshabillé, further adds sexual interest to the painting. The white-sleeved négligée emphasizes the fact that this lady is not fully dressed. A game of hide-and-seek is played by the flirtatious ruffles of her clothing. Her dress and demeanor both suggest youthfulness and sensual playfulness.

On the right side of La Toilette, a maid is standing with her back to the viewer. She gracefully leans to the right as she holds a small cap in her left hand. The back of her dress stylishly hangs in pleated folds and showcases the 1740s fashion of the sacque gown or otherwise known as robe à la française.

Despite being domestic, the maid dresses very similarly to the lady. The two could easily be mistaken for ladies of equal rank and importance. She is decked in rich fabrics and luxurious layers. The maid is dressed á la mode, and the lady approves through the serenity of her glance. This is because the lady probably supplies the maid with her cast-off outfits. It was common practice for good maids to be rewarded with their employers’ discarded wardrobe. Perhaps the maid is wearing last year’s outfit? We do not know.

The surrounding room befits a lady of the leisured class. It is fashionably supplied with costly and imported goods such as the Chinese tea inside the teapot and the Chinese folding screen behind the women.

Yellow, an outrageously expensive color to produce, is splashed almost everywhere. It decks the walls, the screen, the mirror, and the upholstery of the chairs. Pink accents appear on the screen and on the far right chair which echo the pink ribbons and blush of the women.

There is an overstated richness to the room, but also an untidiness signifying the intimacy of the space. A proper reception room would never be this unkempt. This is a well-lived in and private room without the intrusion of formal guests. In addition, the floor is littered with a bellow, a brush, and a fan. The mantlepiece is cluttered by a candle, a letter, a porcelain jar, a bird figurine, and some dangling ribbon.

Further disarray is added by the misplaced ball of wool. It has fallen from the blue sewing bag hanging from the fire screen. It has rolled across the floor and lies between the lady’s legs. A cat joyfully plays with the ball of wool which may be a visual play on words. In French a female cat, or chatte, is vulgar slang for a woman’s vagina. Combined with the open gesture of her legs, François Boucher suggests this lady may not be as innocent as she first appears. Beneath the elegant finery lies a hidden sexual energy.

François Boucher captures so many emotions, thoughts, and desires in La Toilette. It shows the intimacy and happiness of a lost era. It depicts the luxurious pleasures found in the lives of the Parisian elite. Felicity, domesticity, and sexuality are masterfully combined in this fashionable interior scene. La Toilette is lively and lighthearted. It is salacious and scandalous. It teases and tempts the senses. La Toilette is a masterpiece of 18th century French art.