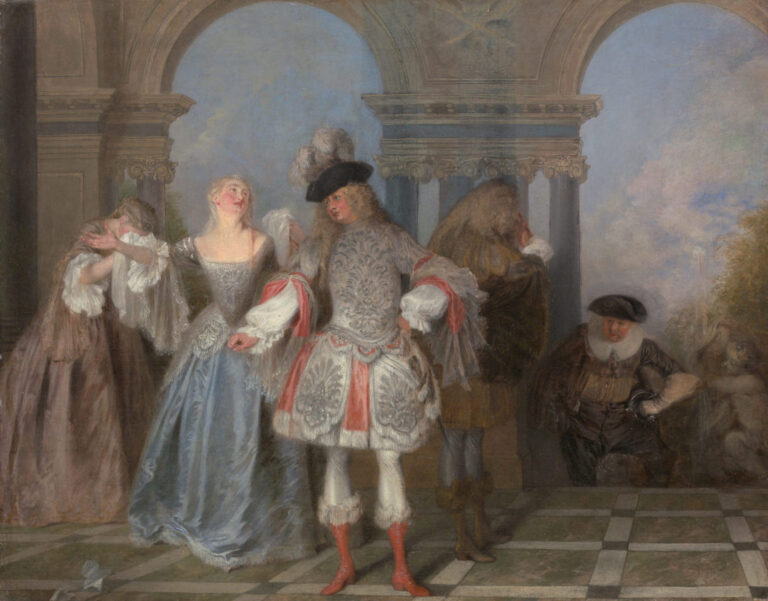 Who was Watteau, one of the most prominent Rococo painters? Not much is known about his life, which makes it and his art all the more mysterious. Are you ready to learn more about the mysterious master of Rococo, Antoine or Jean-Antoine Watteau?

His painterly interests were stirred by Claude Gilot, with whom he collaborated between ca.1705-1708. Gilot was a painter of theatre scenes, including the famous commedia dell’arte. When Watteau began working on his own, he continued to produce paintings with commedia dell’arte characters (for example, Mezzanine was a lovelorn character from the commedia dell’arte) and fêtes galantes, which became a popular genre in France.

Watteau competed for the Prix de Rome in 1709 and 1712 but was unsuccessful. However, the Académie then accepted him – yet he submitted his diploma work only in 1717. Watteau died outside Paris in 1721 but his fame outlived him. For example, many of his works were reproduced in print after his death. He also had followers, such as Jean-Baptiste Pater and Nicolas Lancret.

Although his works may seem light-hearted and silly, they are not as simple as we think. If you look closer, the cheerful scene of a garden party can even assume a sinister atmosphere…

Is the man harassing this young lady?

We have a similar situation below (look to the right): a dodgy guy seems to be bothering this young lady, or is he just complimenting her beautiful fan?

Moreover, the painting does not specify whether the couples are embarking on the island or departing from it. However, the lovers appear to be leaving the island and making their way down to the ship, which adds an air of nostalgia to the scene. It seems to be a celebration of love, since Cythera, one of the Greek islands, was considered sacred to Aphrodite and love.