Time for a Cup of Warm Tea in Paintings 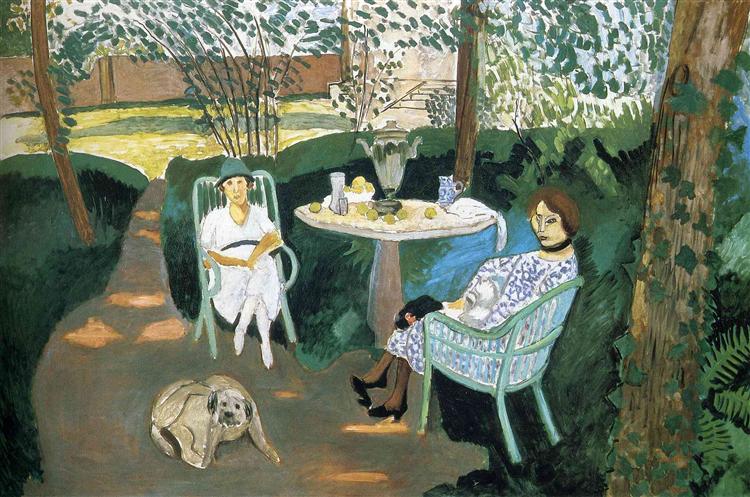 Teapots and Dresses in the Service of the Russian Revolution

One of the highlights of autumn is that drinking hot drinks is no longer looked down on and ordering a big cup of steaming hot cocoa instead of an ice cold frappe is totally legit. While I was sipping my black Ceylon tea last evening and listening to some jazz,  I felt I needed company (living alone without a pet definitely has its downsides), so I turned to my favorite artists. Let’s look at tea in paintings together!

Believe it or not,  tea parties were a real thing back in the day. Starting with the Victorians (oh, how much art owes you, dear Victorians!), afternoon tea was a daily event in any respectable well-off family. The fashion quickly spread from the UK to continental Europe (France, Germany, and of course the Russian Empire- just think of Chekhov’s plays), to reach the flourishing culture of the Gilded Age in the US ( the 1870s to about 1900) where affluent families used teas as debutante parties. (Is this painting a double portrait of two debutante girls trying hard not to spill the precious tea with their trembling hands? I can just imagine the stress; they seem they’re trying to look cool while in reality, they’re boiling inside.)

I would be pretty intimidated if on my debutante party there was a governess like the lady above. However, I would make the sacrifice so I could have the experience of drinking tea from this wonderfully blue china tea-set. I think it is no coincidence that the lady’s eyes are matching perfectly the blues of the cups – this is the epitome of style.

An Informal Tea in the Garden

There was also a more relaxed version of the afternoon tea called  “kettle drum,” a name which most probably originates from the 18th-century slang word for a vivacious party (!) and “kettle” of course for the tea. Kettle drums were more informal; guests could come and go at will, dressed in their regular day-visiting clothes. They could chat and laugh with little formality and enjoy a selection of teas, chocolates, lemonades, cakes, and sandwiches.

A respectable tea party didn’t end with the last cuppa, especially when it was summer or early autumn and it was still pretty warm in the English countryside.  On these days, from 4 to 7 pm, fashionable families held tea dances, also called a thé dansant (French for “dancing tea”). The dances usually performed were waltzes, then after some years one could also enjoy tangos and, by the late 1920s, the Charleston. The parties spread abroad and were especially hip in the US.

The Best Start to a Day?

A delightful morning must include a hot cuppa with milk and sugar and a digestive biscuit (or three in my case) or a fried egg in the case of the Woman by a Window (or is it a lemon?). I wish I had her stylish apartment; in a flower-filled room, tea transforms loneliness into pleasant solitude, doesn’t it?

Tea is also suitable on a sad occasion, even those as serious as a broken marriage. Nina and Roald (his real name was Edgar de Bergen) were married, but their relationship was a rather sad and complicated one. Although they both were interested in art, Nina being an artist in her own right, they couldn’t get along, and when in 1917 her husband was deported from London to France to fight with the Belgian army, Nina didn’t wait for his return. She recalled how the painting came about:

Walter, now Richard, Sickert lived in Fitzroy Street also, in fact he had a number of mysterious rooms for miles around as far as Camden Town. Edgar and I sat for him together, on an iron bedstead, with a tea-pot and a white basin on a table in front of us. We looked the picture of gloom.

The Tranquility of a Teapot

I really adore works by Gwen John, who apart from having an affair with Auguste Rodin, was a fantastic portraitist and still life painter. Living a solitary life, John mastered the art of living which nowadays we would probably call “the slow life.” I think that with images like this one, she would be an Instagram star.