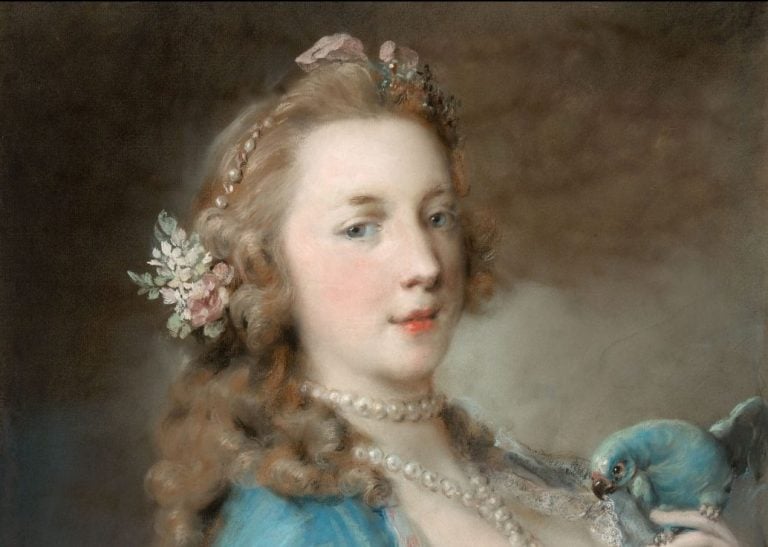 Venetian Rococo played an important role in the 18th century European art. Rococo covers the period from 1700 to 1799, also called settecento. Many great artworks were made during this time and one of the most buoyant centers was Venice. The pungency of the wit, the dynamism, and freshness were advantages of Venetian painters. It is characterized by extravagant ornamentation and a fascinating mix of dream and reality. So, let’s plunge into the aesthetic world of sensual ladies and mythological scenes!

None of the Venetian artists were as close to the French Rococo as Giovanni Antonio Pellegrini! Like French painters, he referred to a broad range of themes depicting religious and mythological scenes, allegories, and portraits.

The painting Christ Healing the Paralytic is typical for the mature period of Pellegrini’s life when his artworks differed with lyric mood.

The finest Baroque church of Vienna, the Karlskirche, was built from 1716 to 1756. Its altarpieces were commissioned to two Austrian painters as well as to two celebrated Venetian masters. One of them was Giovanni Antonio Pellegrini.

Sketches of each of these paintings made in the early 1730s were brought to the Budapest Museum of Fine Arts. Several versions of Pellegrini’s composition have come down to posterity. We can find the respective versions in Viennese museums, at Opocno in Czech Republic, and one currently kept in Canada (formerly in a private collection in Vienna).

Remarkably, the majority of Venetian Rococo artworks were neither made in Venice nor for Venice. The artists who decorated churches and palaces with their frescoes and paintings lived far from their motherland: in London, St. Petersburg, Madrid, etc.

Antonio Bellucci worked abroad for several decades. He started his art-life as a decorator of Venetian shrines and palaces and later joined the international artistic stream and traveled throughout Europe. For instance, he worked in Austria, Holland, Germany, and England.

According to Venetian traditions of the 18th century, his artworks were framed canvases, not frescoes.

The Danae, possibly made in the Austrian period, demonstrates precise lines, soft shapes, and unnatural poses. Danae was one of the most popular characters in Rococo art. In the foreground, we can see the princess locked in a tower, while Jupiter, as the golden rain, appears in the upper right corner.

Rosalba Carriera, called the Queen of Pastel, is a perfect example of a self-made woman.

Although several women painters of the 16th and 17th centuries had international reputations, none enjoyed as great a success nor had as much influence on the art of her contemporaries as Rosalba Carriera.

There are some of Carriera’s features that distinguish her from other female Rococo artists: entrepreneurship, mobility, signature style, and wealth.

Carriera started her career as a miniature painter. Basically, she worked in ivory, creating lovely souvenirs for snuffboxes or medallions. Moreover, living in Venice, which was a major trading city, she could sell her miniatures to merchants. That was a brilliant way to popularize herself as an artist and choose profitable commercial offers. No doubt, the financial success of Rosalba Carriera’s workshop was overwhelming in the context of the 18th-century society.

Similarly to other Venetian painters, Rosalba Carriera worked abroad. Namely, at French and Austrian courts and made numerous portraits of monarchs, philosophers, and aristocrats. Furthermore, at the age of 25, she became a member of Accademia di San Luca. Later, she wrote a manual for artists. The manuscript is kept at the Venice State Archive. It is highly unique, as there weren’t many 18th century texts written by women.

However, Rosalba Carriera’s main achievement is the popularization of pastel technique. Previously pastel was just a medium for sketches, and not for complete portraits.

Thanks to Carriera, pastel painting became one of the most beloved techniques of the Rococo era. Using it reduces the time a sitter needs to pose as pigments are dry. Meanwhile portable pastel sticks allow artists to draw anywhere and the colors are bright and easy to mix.

In 1756, the Empress Elisabeth of Russia invited Pietro Rotari to the court. The artist received a warm welcome from the Russian aristocracy and shortly thereafter he was commissioned to create portraits to decorate the interiors of imperial palaces. Thus, the Rotari’s Chambers in the Oranienbaum, Gatchina, and Peterhof residences in St. Petersburg were decorated in a truly fashionable manner.

St. Petersburg became a new home for Pietro Rotari and for his series Passioni. Remarkably only seven models posed for the 368 unique portraits that covered the walls like wallpaper!

For the Chamber of Fashions and Graces in the Peterhof palace, Rotari had to represent the ethnic variety of Russia through female portraits. Rotari was good at the aesthetic and emotional representation of human beings. Instead of national figures, we’ve got an anthology of feelings.

Young Venetian artists could present, sell or buy artworks at exhibitions organized at Piazza San Marco. This series of events, inspired by the Paris Salons, was also an important chance for them to network and enter the local art scene.

The geographic location isolated Venice and that led to preservation of original Venetian traditions, in art particularly. These are the reasons why Venetian artistic school rose above all the European ones, keeping it an artistic landmark for centuries.