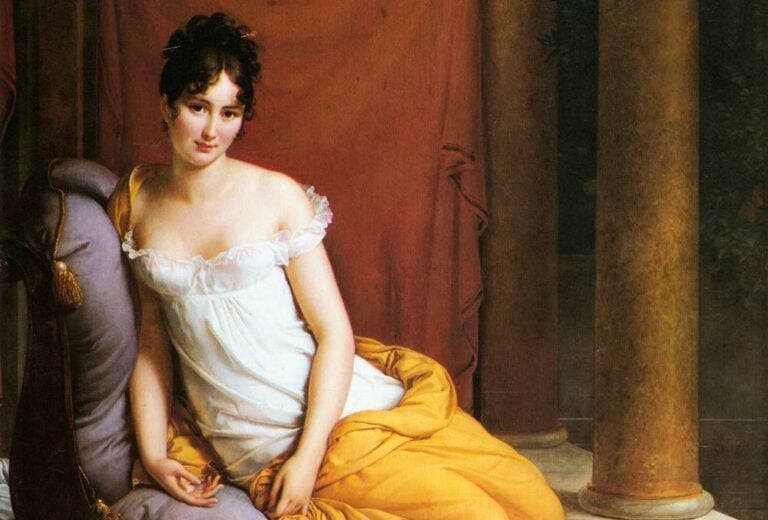 Dress Like a Byzantine Empress – Byzantine Art in Fashion Collections

Heels Were Never Just for Women: Men in Heels

Due to the pandemic and never-ending quarantines, homewear fashion is popular once again. But don’t think that boudoir fashion was unpopular before this. As art shows, from the second part of the mid 18th century, negligee fashion becomes mainstream! Because dressing up took plenty of time and visitors could arrive unexpectedly. Therefore, people needed easy to wear but fancy homewear outfits ready for these unexpected meetings! Find out more about the history of boudoir fashion in this article!

Prokofiy Demidov was one of the wealthiest people in the Russian Empire. His personality combined intelligence with eccentricity. Which are shown on the canvas by famous Russian artist, Dmitry Levitsky.

The Portrait of Prokofiy Demidov is a full-length image of a nobleman in a homewear suit instead of his official attire decorated with medals. And while the informal style brings to mind that gardening was Demidov’s hobby. Nonetheless, his graceful pose and smart silk clothes can also tell you a lot about the person being portrayed.

No doubt, Demidov was rich enough to wear a silk robe at home. And his emerald-color turban refers to the oriental fashion, that was popular in the late 1700s. However, he demonstrates his neglectful attitude to expensive clothes because he does his gardening without wearing an apron or gloves.

Demidov’s right hand touches a watering can. There is an open book on the table. And Demidov’s left hand points to the plants. Interestingly, behind the plant pots you can see the Moscow Orphanage, so it isn’t clear whether Demidov is pointing to the pots or to the building in the background.

Generally, the composition shows that Demidov is a careful gardener who also cultivates the seeds of the Russian intelligentsia of his own accord.

A Nude Dress of Madame Recamier

Juliette Recamier was the ideal of feminine elegance in the early 19th century. Her delicate face is a modest example of beauty. Although she did nothing extraordinary herself, she attracted the most brilliant writers, artists, and royals.

A Portrait of Juliette Recamier was made especially for Prince August of Prussia, her lover, by the artist Francois Gerard.

The Post-Revolution period dictated new fashion rules: no opulence, no silk, no discomfort! Importantly, the dress should be affordable for everyone. And that is why you see an exquisite lady in a plain cotton chemise dress.

Before the French Revolution, chemise dresses were classed as homewear outfits. But during the Regency period young women danced in these dresses at balls, wearing lingerie underneath. Obviously, a chemise dress wasn’t suitable for European winters, and so cashmere capes added to the dress perfectly. Incidentally, cashmere was so expensive that brides often got these capes as their dowry.

Russian painter Pavel Fedotov was a master of genre painting. His artworks look like a suddenly snapped photograph from the 19th century. The Aristocrat’s Breakfast depicts a ridiculous scene from the life of a young Russian man. Who has lost all of his fortune on card games. Nonetheless, he tries to conceal his misfortunes by surrounding himself with luxurious things. And a fancy homewear outfit in particular.

First of all take a look at his homewear outfit. The young aristocrat wears a robe made of expensive fabric and wide pants made of silk. Which were very fashionable in the early 1800s. Also, he wears a smoking hat to protect his hair from smoke and dust. By the way, women often gave these hats to men as a gift, embroidering the hats themselves. Also you can see that he has a golden Persian lamp under the table.

But pay attention to his food. As a slice of bread is all he has for breakfast! A white poodle barks at an unexpected visitor. Noticing it, the aristocrat hides the bread under a book.

Viktor Bobrov’s By the Fireplace painting depicts a young lady, a kind of Russian beauty of the period of candles, fireplaces, old paintings, pianoforte music. It would be an excellent portrait of some “Countess N” of a surname known to everyone – at home, in a capote, a few minutes before bedtime. Capote is a long wide homewear dress decorated with lace. Generally, the late 19th century homewear outfits for women included a capote bonnet and a capote dress. On the edge of the fireplace, we notice an army cap with an officer band. And it isn’t a portrait, but a genre picture, a whole story.

Friedrich Carl Frieseke was an American Impressionist painter with German origins. The main theme of his artwork was female nudes in his home and garden in Giverny. Frieseke confessed to Renoir‘s impact on his painting style, which is visible through the light pastel colors and the blithe mood of his pictures.

At the end of the 19th century the Japanese kimono became the must-have garment of homewear outfits. Because it was soft, easy to put on, and most importantly an absolutely exquisite robe, all of these qualities meant that European women also became fond of this Japanese fashion wave. And later on in the 1910s, the kimono was transformed into a new form of high-waisted evening gown.