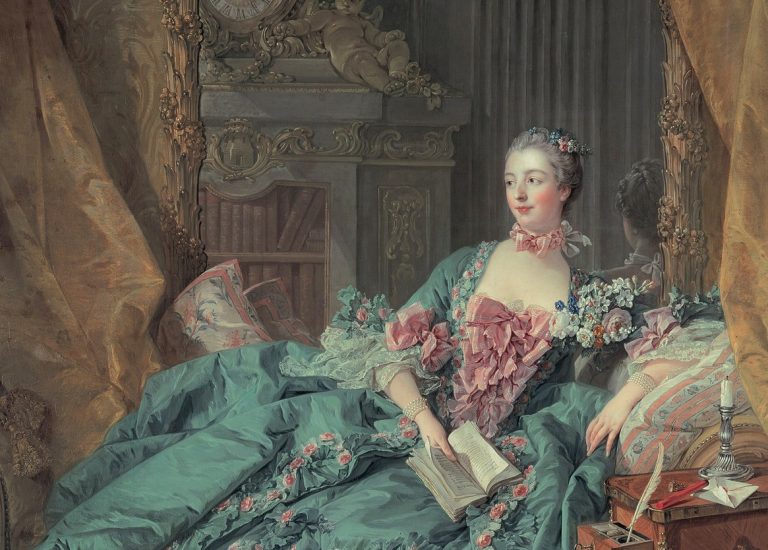 Everything You Need to Know About François Boucher

François Boucher (1703-1770) was the most celebrated French painter of the 18th century. His painting Madame de Pompadour captures the beautiful mistress of King Louis XV. She is at the height of her courtly influence, and artistic patronage. Let us explore this Boucher masterpiece. Let us meet the Queen of the Rococo.

Known as the Queen of the Rococo, Jeanne Antoinette Poisson, later known as Madame de Pompadour, was the maîtresse-en-titre of King Louis XV of France from 1745 to her death in 1764. Being the king’s mistress meant that Madame de Pompadour was the most powerful woman in France in her time and even had more influence at court than the king’s wife, Queen Marie Leszczyńska! Jeanne Antoinette used her position, power, and access to the king’s treasury to patron France’s greatest artists and craftsmen during her lifetime, including the famous François Boucher.

When Boucher painted this portrait in 1756, Madame de Pompadour was at the pinnacle of court life. She is wearing a fashionable green silk dress adorned with pink bows and roses.

Madame de Pompadour is surrounded by symbols of her artistic interests and patronage. The feather quill on the right represents her patronage of Diderot, Voltaire and other philosophers of the Age of Enlightenment. The book in her hand displays her passion for reading and learning, which is evident because she had a personal library of 3 525 books!

The architectural drawings in the lower left corner are her building projects like the famous Petit Trianon designed by architect Ange-Jacques Gabriel. Madame de Pompadour loved to design, build, and decorate fabulous homes where she could showcase her exquisite Rococo style.

The King Charles Spaniel sitting at Madame de Pompadour’s feet is her beloved pet, Mimi. The pup symbolizes her owner’s loyalty and fidelity to King Louis XV. The two roses beside Mimi symbolize the couple: one for the King and one for Madame. She is therefore stating that she is exclusive to the King as his mistress.

Madame de Pompadour was a fascinating woman and art patron. François Boucher certainly captures her relaxed elegance and her intellectual pursuits on this magnificent masterpiece. Boucher’s Madame de Pompadour is therefore a visual biography of the sitter. What the painting does not capture is the sitter’s other cultural influences on the world.

For example, did you know she founded the famous Sèvres porcelain factory, popularized fresh cut flowers in vases, and trended goldfish in bowls as pets? Madame de Pompadour was once quoted as saying,

Every day, I wish to make the world more beautiful than I found it.

With everything and everyone she supported during her lifetime, including Boucher, she certainly achieved her wish and still continues to do so even today.