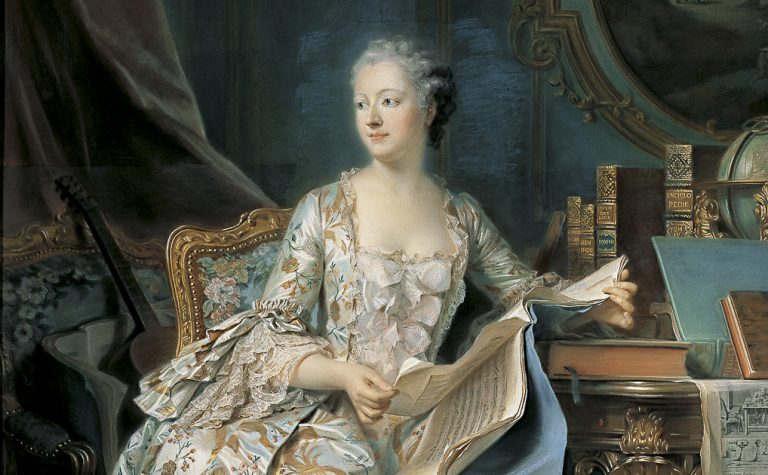 Elvis Presley’s famous hairstyle was named after her, a French champagne glass is believed to have been modeled after her breast and, according to the legend, the ‘marquise cut’ diamond was commissioned to resemble the shape of her mouth… Yet, Madame de Pompadour left her legacy way further, as she was the uncrowned queen of France and the arts. See Madame de Pompadour in portraits!

It was destiny that Jeanne Antoinette Poisson became chief mistress to King Louis XV; when she was small, a fortune-teller prophesied that she would one day win the heart of the king. Therefore, when she entered adolescence, her mother oversaw her training to become a royal mistress-to-be. She had to memorize entire plays by heart, dance, sing, paint, engrave and play the clavichord.

At age 19 she married into the d’Étiolles family, which was an obvious marriage of convenience. She had two children with her husband, Charles-Guillaume Le Normant, but both of them died in childhood. Antoinette soon founded her own salon, which became very popular in Parisian circles and which was attended by many intellectuals, such as Voltaire, with whom she became close friends.

Antoinette turned into a real celebrity, to an extent that the king himself heard rumors of her intelligence, talents, and beauty. A group of courtiers decided to promote her to the king, and a masked ball at Versailles seemed to be a perfect occasion to do this. In 1745, Antoinette, dressed up as a domino, met a plant. A royal plant, of course. A month later she was already the king’s mistress, installed in the palace in an apartment connected with the king’s chambers by a secret staircase.

Antoinette was a passionate patron of architects, furniture craftsmen, interior designers, writers, painters, and sculptors. She was also an artist herself; she made engravings and drawings, and she even brought to Versailles the most talented gem carver to teach her how to sculpt gems. She carved little scenes and cameos into semi-precious stones for rings and bracelets, which she would later give out as gifts. She was also responsible for the development of Sèvres, which became one of the most famous porcelain manufacturers in Europe. She protected the Physiocrats, a group of French Enlightenment economists, and supported and defended the development of Denis Diderot’s Encyclopédie against those of the Church who sought to have it suppressed.

Portraits of Madame de Pompadour were a genre in themselves. She used portraits to communicate with the king and the French, announcing her loyalty, love, and intellect… She was hailed as a major innovator and “the sponsor and queen of the Rococo“, according to the Goncourt brothers. François Boucher found in Mme de Pompadour his most enthusiastic admirer. Only after her death, however, in 1765, he was appointed First Painter to the King.

Besides portraits, Madame de Pompadour commissioned from Boucher projects for tapestries, which were meant to be woven exclusively for her. She picked the story from Ovid about the rising and setting of the sun; everything was symbolic, as you can imagine. In this painting, Boucher depicted her as the nymph Tethys welcoming the returning sun, modeled after Louis XV. The paintings were shown at the Salon in 1753 and raised quite a clamor.