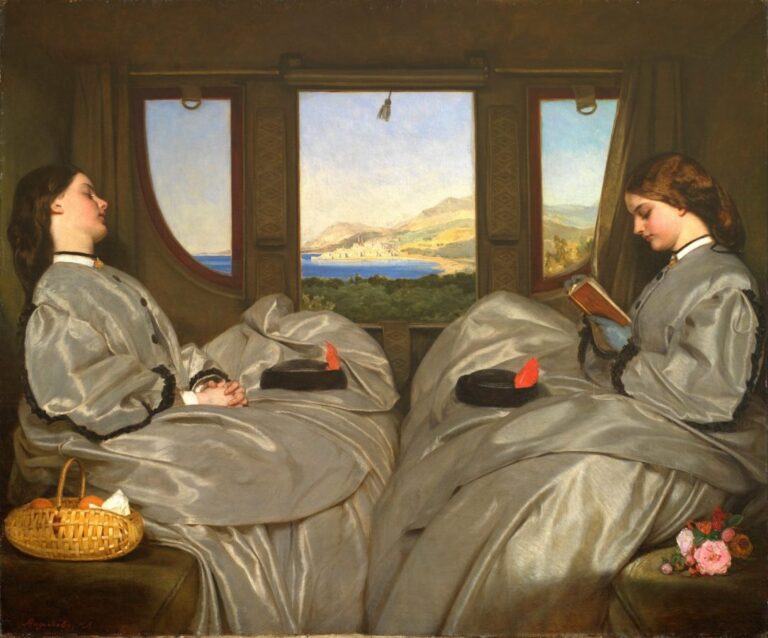 “As you set out for Ithaka, hope your road is a long one,” thus begins Ithaka, the famous poem by C.P. Cavafy. When we travel, we always think about the destination – thinking of the time we spend to arrive as a hassle, a necessary evil.  But, as Cavafy and many other artists will tell you, being on the road has its own kind of magic. Let us look at some of the best traveling paintings.

Director Wes Anderson would surely love this painting, or maybe not. At first glance, the scene inside the railway carriage looks completely symmetrical: the two women identical. They wear the same dress, the same hat, that both have placed on their lap. The window is split into three parts, emphasizing the sense of symmetry. However, there are small details that dissolve the similarity. The woman on the right has her hair up, wears gloves, and is reading a book. Beside her sits a flower bouquet, while the other with loose hair and bare hands is daydreaming, with a basket beside her.

Sadly, neither of them pays attention to the magnificent view of the French Riviera outside the window. They both remain firmly enveloped in their private worlds, eschewing the experience of traveling and thus putting an ironic ring to the painting’s title.

Traveling by Boat: Breezing Up

Traveling for business does not have to be boring. On a cloudy afternoon, a fisherman and three boys return from a day at sea. The boat moves quickly on the waves. The man and the boys are perched on the right side to balance the breeze that pushes the sail. It has been a good day. The floor of the boat is teeming with fish. At last, they have some time to relax. Look at the young boy in the front: he is sprawled across the bow taking in the wind and the sea.

Winslow Homer presented this painting in 1876, the centennial year of the United States. This view of American life completed the climate of postwar nostalgia at the time. Stylistically, the loose brushstrokes and warm colors remind us of the French Realism of Gustave Courbet and Edouard Manet.

The Great Wave is probably the most famous piece of Japanese art. A huge frothing wave is about to crash on three fishing boats. The fishermen are frantically trying to get to shore – being at sea is not always fun. In the distance, the sacred mountain of Japan, Mount Fuji, is dwarfed by the immense body of water.

Katsushika Hokusai’s print is part of his series Thirty Six Views of Mount Fuji, but through the use of linear perspective, the largest mountain in Japan seems small. However, the waves are perfectly framed around it to make it stand out.

Traveling By Boat: The Last of England

A young family sets on an uncertain journey with dreams for a new life. In The Last of England, we see a pair of immigrants beginning their voyage to Australia. The man seems broody and stressed while the woman is resigned to her fate. From an opening in her cloak, we barely see her clutching her baby’s hand.  Emigration is surely one of the worst reasons to be on the road – being forced to leave everything and clinging on to hope. The white cliffs of Dover are looming in the back, the last view of England, while in front of the couple, strung cabbages reminds us of the long journey ahead.

Traveling by Car: Tamara in the Green Bugatti

With the turn of the 20th century, traveling by car became more of a commodity than it used to be. Tamara de Lempicka, nicknamed the baroness with a paintbrush, epitomizes the modern woman of the roaring 20s. Her stylish persona, which she meticulously built, featured in all the most forward-thinking magazines in Europe.

Tamara in a Green Bugatti was a commission for the cover of the German magazine Die Dame. In her characteristic Art Deco style, the artist portrays herself as an independent, emancipated, and sexually liberated woman. She stares smugly at us, with her leather gloves and blowing majestic scarf. The car is another symbol of her emancipation. A woman driving in the 20s was a rare sight. Moreover, it is a nod to the contemporary futurist movement that celebrated speed and everything that had to do with the modern world.

Before trains and cars, camel caravans crossed the desert to deliver goods and offer safe passage to travelers. Leon Belly’s orientalist painting shows a caravan heading towards Mecca, a place of pilgrimage for all Muslims. The convoy advances towards the viewer in a dramatic fashion.

Belly manages to capture the pious but weary faces of the pilgrims under the scorching sun. Adding an exotic note, the camels are large enough to dominate the canvas. Even though its subject matter is chiefly Islamic, Belly creates a more expansive religious meaning. Take notice to the left of the column; we can see a man walking along with a woman and child on a donkey – the pair refers to the biblical theme of The Flight into Egypt.

There are many reasons and many ways to be on the road. Whatever our destination, time spent traveling fills us with new experiences. Or, as Cavafy says, “Ithaka gave you the marvelous journey. Without her you wouldn’t have set out.”