Somewhere at Sea: Ivan Aivazovsky and his Marine Art 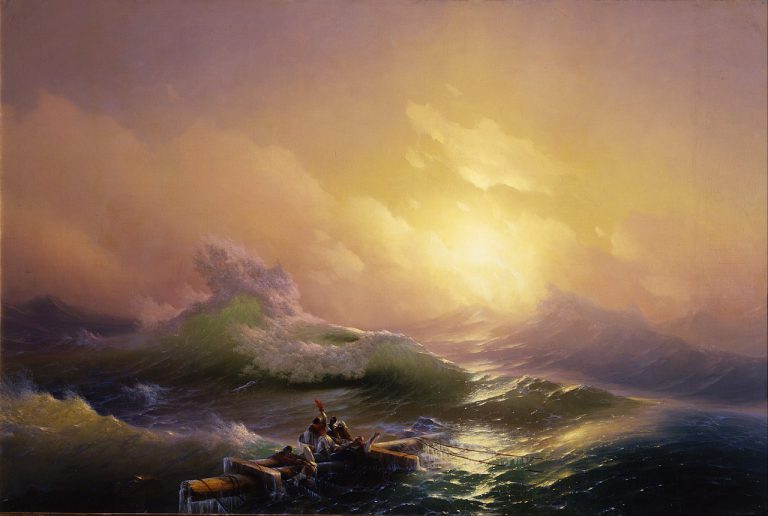 Christ In The Storm On The Sea Of Galilee, By Rembrandt

Joaquin Sorolla, Strolling Along The Seashore

Many artists painted the sea, but only Ivan Aivazovsky was completely devoted to it. Over his long life (1817-1900), he dedicated thousands of canvases to the sea. Sunsets and sunrises over the sea, storms, calm, shipwrecks, sea battles, and even a worldwide flood – we welcome you to the world of Ivan Aivazovsky!

Armenian by birth, Ovannes Aivazyan was a native of Feodosia, a city on the Black Sea. You can imagine where the future Ivan Aivazovsky got his life-long inspiration! The artist lived there most of his life and built himself a luxurious estate.

At an early age, Aivazovsky showed outstanding musical abilities. Without any help, he learned to play the violin quite well. And if it were not for his later-revealed talent in painting, then who knows – maybe the world would have recognized Aivazovsky as a musician?

His artistic abilities were also evident. Aivazovsky entered the Imperial Academy of Arts despite the fact that he had not yet reached the required age (he was under 14 years old). Alexey Olenin, the Academy president, made this decision after looking at only one drawing by Aivazovsky.

Aivazovsky received the Grand Gold Medal of the Academy in 1837 and won a trip to Europe. The 20-year-old Aivazovsky had also graduated two years earlier since the teachers decided that the academy could not teach him anything more.

Embarking on the Ship of Success

In 1840-1844, the young master traveled across Europe, perfecting his skills. At first, he lived and studied in Italy. During these years he developed his own creative method and learned to work from memory. Yes, fun fact: Ivan Aivazovsky painted all his famous seascapes in his studio, and not in nature! His studio had windows with the court view, not the sea.

Aivazovsky’s Italian paintings brought him great success, consequently, he was able to continue his European adventures. Once, while traveling, Aivazovsky’s steamer got into a heavy storm. The ship was thought to be wrecked and the artist lost. His obituaries were even published in Saint Petersburg newspapers!

Ivan Aivazovsky returned to Russia in triumph. He became an academic and was assigned to the General Navy Staff as an artist.

“Nicholas I of Russia, going to sea on a paddle steamer, once took Aivazovsky with him. The Emperor stood on the casing of one steamer wheel, and the artist on the other. And Nicholas shouted: “Aivazovsky! I am the king of the earth, and you are the king of the sea!”

Aivazovsky received many honorary titles (including counter admiral). He traveled a lot and captured many seas: he was in Egypt, Greece, and Anatolia. But most importantly, Aivazovsky continued to paint seascapes, which were very popular. In total, he created more than six thousand paintings. However, he made numerous replicas of a single composition, if it turned out that the public liked it.

In 1843, Ivan Aivazovsky also became the first Russian painter whose works were exhibited in the Louvre: Sea shore. Calm, Night on the shores of Naples, and Storm near the coast of Abkhazia.

“He is not bright, but his nature is complex and worthy of attention. In himself, he combines a general, and a bishop, and an artist, and an Armenian, and a naive grandfather, and Othello… He was a friend of Pushkin, but did not read Pushkin. In his life, he has not read a single book. When asked to read, he says: “Why should I read if I have my own opinions?”

To be fair, Aivazovsky painted not only deep waters but also life scenes, mountains, and biblical scenes… But it is his marine-loving soul that made the artist famous.