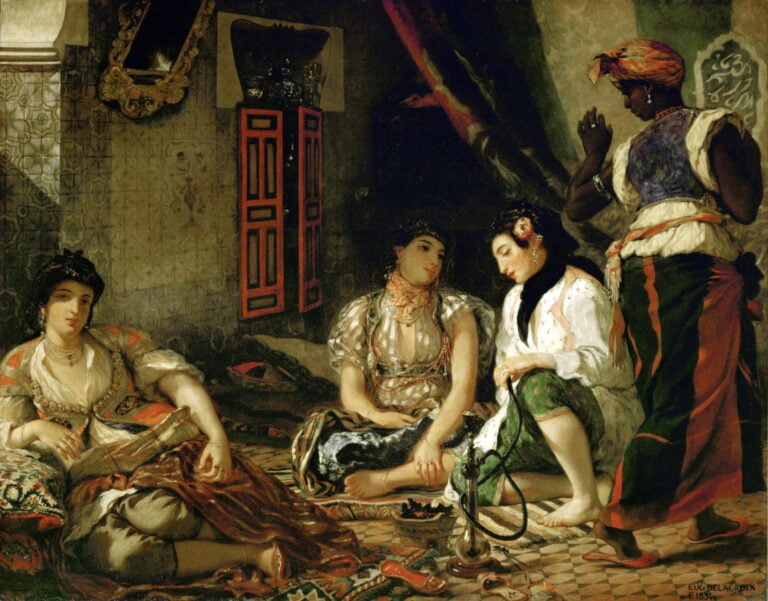 Eugène Delacroix, The Women of Algiers, 1834, The Louvre, Paris.

Eugène Delacroix was a French Romantic artist who was seen as the leader of the French Romantic school of art from the beginning of his career. 19th-century French painters, including Delacroix, loved the Orient and the style of 19th-century Academic art which focuses on the Middle East and North Africa is referred to as “Orientalism”. This interest began when Napoleon invaded Egypt and Syria in 1798–1801. Although this invasion was unsuccessful, it stimulated great public interest in Egyptology. Artists’ interest in this exotic, colorful and mysterious world did not end until the first decades of the 20th-century.

Oriental, Islamic, Hebraic, and other Semitic cultures were favorite themes for paintings. As France became more engaged in North Africa, artists started visiting these cultures more. Typically, they showed the Orient as exotic, colorful and sensual, though this was something of a stereotype. Lounging female slaves were particularly popular, while other scenes were seen as closely comparable to their equivalents set in modern-day or historical Europe.

Here we present a couple of Delacroix images of the Orient. Be careful; you can fall in love with these colors!

The Death of Sardanapalus

The Death of Sardanapalus was inspired by the work of another Romantic, the poet Lord Byron. Here we see an orgy of cruelty. The composition, all reds and golds, shows the legendary Assyrian king, cruelly destroying his possessions before committing suicide. The rebels are attacking his castle and all is lost. Sardanapalus is stretched out on a luxurious bed at the summit of a huge pyre. He orders his eunuchs and palace officers to cut the throats of his women, his pages, and even his favorite dogs and horses. Note that his women are placed on a level with his horses and dogs. None of the objects that have served his pleasure are to survive him. This mixture of sex, violence, inactivity and luxury ran through much of French Orientalist painting.

The Women of Algiers

In 1832 Delacroix finally visited what is now Algeria (then recently conquered by the French, and Morocco), as part of a diplomatic mission to the Sultan of Morocco. He was greatly impressed by what he saw and often compared the North African way of life to that of the Ancient Romans. After his return to France, he continued to paint people and places he had seen on his trip. Many of his scenes featured Jews or warriors on horses. Like many later Orientalist painters, it was difficult for him to sketch women as they were hidden away in their homes. However, he was apparently able to get into the women’s quarters or harem of one house to sketch his Women of Algiers. Very few later harem scenes could claim such credibility.

While he was in Morocco Delacroix made notes of his visual memories. This painting is one of those based on those notes.

“The Jewish wedding. Moors and Jews at the entry. The two musicians. The violinist; thumb in air, the underside of the other hand very shaded, light behind, the haik around his head transparent in places; white sleeves, shadow behind. The violinist; seated on his heels and on the gelabia. The body of the guitar on the player’s knee; very dark near the waist, red vest with brown notes, blue behind the neck. Shirt sleeves turned back up to the biceps; green paneling beside him; a wart on the neck, short nose. Beside the violin, a pretty Jewish woman; vest, sleeves, gold and amaranthine.”

The Fanatics of Tangier

Delacroix witnessed this event through the shutters in Tangier or Meknes. The subject is difficult to understand but Delacroix offered this explanation in the brochure for the 1838 Salon:

“These fanatics are called Issaouis, after their founder Ben Issa. At certain times of year, they meet outside towns; then, their enthusiasm excited by prayers and wild cries, they enter into a veritable state of intoxication, and, spreading through the streets, perform a thousand contortions and even dangerous acts.”

The artist’s journey through North Africa inspired him for life. Delacroix created a couple of paintings of hunting. In this one he illustrates movement and violence by use of a bright, intense lighting on details selected for their significance. In particular, are see the tiger and the fabric of the clothes, animated by the rapid gestures of the men who are attacking the wild beast.

If you like the Orientalism of Eugène Delacroix, here’s everything you should know about Orientalism. Check also: