Painting of the Week: A Bar at the Folies-Bergère 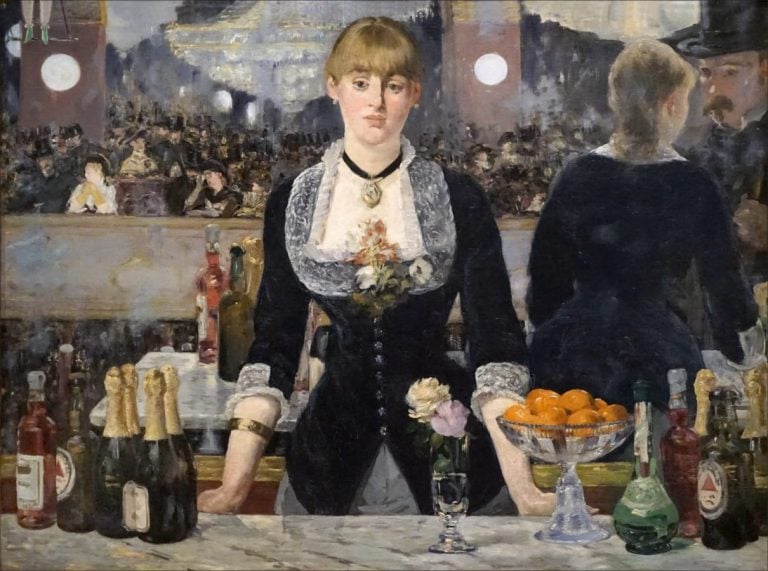 A Bar at the Folies-Bergère is considered Edouard Manet’s last major painting. Presented in the Salon of 1882, just a year before the artist’s death, its theme as well as the execution unsettled the prudish Parisian society.

Manet and the Parisian Salon

Manet’s relationship with the Salon had been a turbulent one from the start. In 1863, the Salon jury rejected two thirds of the works presented, among them Manet’s Luncheon on the Grass. This decision led to the formation of the Salon des Refusés, meaning the “exhibition of rejects”, where the juxtaposition of naked women and fully dressed men on the artist’s painting caused controversy. Manet continued to present his paintings there, wishing to be acclaimed as a painter in the traditional way, contrary to the Impressionists who renounced the Salon altogether. Two years later, he exhibited Olympia, a painting that caused so much uproar it had to be hung at a great height to avoid vandalism. So, we arrive now to 1882, at the Bar at the Folies-Bergère and its provocative subject.

The Folies-Bergère was one of the most famous café-concerts in Paris. It represented a new kind of entertainment for the progressively wealthy and growing middle class. This is a luxurious venue as we see from the chandeliers or the champagne that is on sale.

On the top left corner, we see the kind of shows they would have watched: here are the hanging feet of an acrobat. However, the bar was also considered a notorious place for picking up prostitutes, especially among the girls who worked there. For example, the writer Guy de Maupassant described the barmaids as “vendors of drink and love”.

The painting shows one of the bars and its bartender. The model is Suzon, one of the girls who worked in the club. She modeled in the artist’s studio, where he set up a bar. Manet introduces a subject from everyday life, on the verge of propriety, in the Salon, which is the official art exhibition of the French Academy. In placing the common bartender among the Venuses and other mythological figures that were deemed most important, he elevates everyday life themes.

Perhaps the most baffling element on the canvas is the unreadable expression on the girl’s face. Some thought she looked bored, others only tired from the long shift at the bar, while still others believed that she does not show any emotion at all. It may all be true or none at all, but she certainly seems distant and aloof.

A complex piece, at first it seems like the crowd is behind the girl, but on closer inspection, we realize that we are looking at a huge mirror, its golden frame visible next to the girl’s left arm. Same as Olympia, Manet involves the viewer in the story of the painting. The barmaid is ready to take our order. However, how is that possible when, on the top right corner, we see her speaking to a man in a top hat?

Even more, from our own point of view, she looks fairly reserved. On the contrary, her posture in her reflection is a whole other story. In the mirror, the girl is leaning on bar, speaking with the man in a lively manner. It certainly imbues the painting with more movement and action, but also opens up various interpretations. Some think it shows two contrasting situations: in front of us we see want we hoped would happen in a bar like this, while inside the mirror we see what really took place.

Furthermore, the mirror has an additional purpose. Manet seldom used linear perspective in his paintings, making the backgrounds look flat. Here he toys with that idea. The glass of the mirror is a flat surface but through its reflective ability, it creates a whole new world for the viewer. In addition, Manet plays with the perspectives in a literal and in a metaphorical sense. Literally, the man speaking with the girl is outside our line of vision. We cannot see him as a physical presence, but only his reflection. Metaphorically, Manet comments on the nature of painting.  Since the Renaissance, painting had to depict life accurately, such as what we see in a mirror. Manet disagrees with that opinion and embraces subjectivity, stating that everything is a matter of perspective.

With his paintings, Manet introduced modern Paris inside the stuffy conservative atmosphere of the Salon. He reformed the official art of France, showing not a world lost in myth but a world alive and breathing.