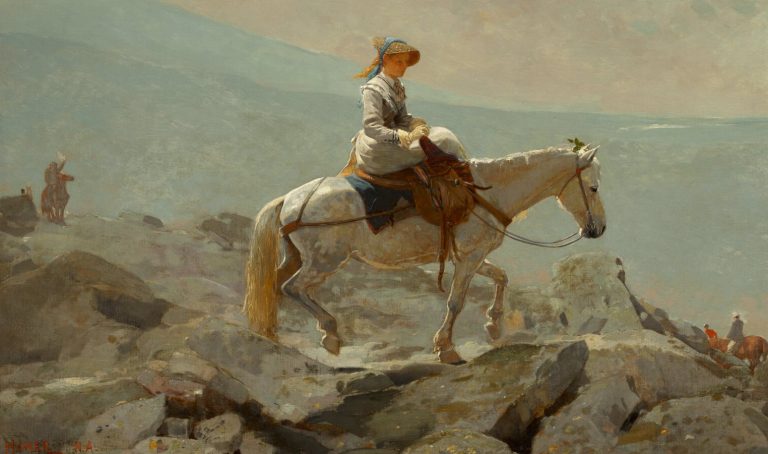 From soldiers to frolicking schoolchildren and New England fishing communities, Winslow Homer depicted American life. His works present unidealized, yet visually-stunning views of the nation after its brutal Civil War. The Clark Art Institute in Williamstown, MA, owns a great assortment of Homer’s paintings, as well as many prints based on his works. We can use Institute’s collection to explore how Winslow Homer painted America.

The Boston-born Winslow Homer (1836-1910) originally worked as an illustrator for periodicals like Harper’s Weekly. During his illustration career, he recorded the soldiers and events of the American Civil War in a series of paintings, many of which became prints for Harper’s. Living in New York after the war, he slowly abandoned illustration in favor of painting, despite his scant formal training. However, his illustration background remains apparent in his painting style through graphic, easy-to-read compositions.

Homer’s paintings engagingly represent Americans at work and play. He often portrayed rural folks, such as farmers and fishermen. Homer respected these hardworking men and women, so he made efforts to convey their difficult lives. His paintings are never sentimental or idealized, but they are still quite pleasant to look at. Some have idyllic qualities, while others can be quite dramatic.

Homer also painted scenes of the upper classes engaged in leisure activities such as swimming and riding. He worked primarily in the American northeast, specifically New England and the mountains of upstate New York. However, he traveled to Florida, Canada, Bermuda, and the Caribbean. Additionally, he also spent time in both England and France.

Inspired by his time in Tynemouth on the English coast, Winslow Homer moved to Prouts Neck, Maine in 1883. He lived and worked there until his death in 1910. Homer clearly had an affinity for the ocean and as a result, many of his most beautiful paintings depict the sea and coast at Prouts Neck. His countless images of sailors and fishers include quiet moments, as well as dramatic storms and daring rescue missions.

Homer also painted numerous seascapes. His late paintings focus on the drama of the water itself while minimizing or entirely eliminating human elements. He represented clouds, waves, and the spray of seawater with thick, painterly brushstrokes that can feel almost violent in their intensity. Perhaps because of this, some people find Homer’s late paintings of Prouts Neck, like Summer Squall, to be harsh and unfriendly.

Homer at the Clark Art Institute

If you want to learn more about the Winslow Homer paintings and prints at the Clark Art Institute, we recommend watching this series of short videos about 16 key artworks by Homer in the museum’s collection.