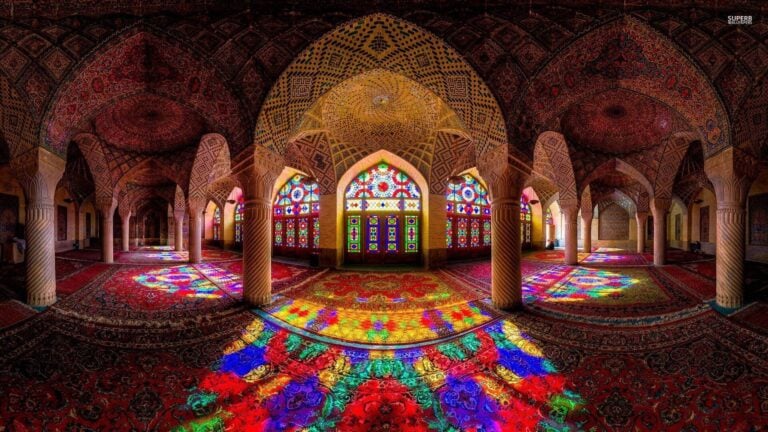 Explore the World of Medieval Glass

The practice of decorating pieces of glass with the aim of adorning a room seems to originate in the ancient Roman Empire. Later stained glass windows quickly became the main decorative and educative element of churches, cathedrals, and in other Catholic buildings, in particular during the Middle Ages. Through the centuries they gradually fascinated other religious and non-religious groups. Therefore, nowadays they can be found not only in churches but also mosques and modern buildings. Discover seven of the most intricate stained glass windows!

The oldest stained glass windows in their original place are in the Augsburg Cathedral, Germany. This Romanesque church was realized in the late 11th century for the Roman Catholic population of the area.

As frescoes and statues, they were (and are) useful to immediately present biblical characters and events to the common people. However, the windows keep hiding something – their exact origin is still under debate. Some art historians believe that the panels were realized at the consecration of the cathedral, in 1065. Others suggest that the windows are from at least the first half of the 12th century. In any case, they are almost 1,000 years old!

The windows display portraits of prophets and biblical figures such as Moses, Daniel, David, Jonah, and Hosea, as if they were gazing down from the south clerestory. It is believed that these surviving windows could be part of a larger series. During World War II, bombs seriously damaged the church. Luckily enough the stained glass windows escaped this destruction and can still be appreciated by everyone to this day!

The Largest One: Resurrection Cemetery Mausoleum

In the Resurrection Cemetery Mausoleum (Justice, IL), is what is certified as the largest single stained glass window in the world. The certification came from the Guinness World Records Team no less!

Pickel Studio designed the installation, then realized it with the Dalle de Verre technique, a sort of glass mosaic. It includes 2,448 individual colored panels over more than 2,000 square meters. The panels cover large areas of the mausoleum walls. In this way it became an architectural masterpiece from mid-20th century.

The windows depict Biblical stories, but not just those! There are other incredible subjects, such as dinosaurs in the Garden of Eden, an atomic explosion, as well as Saturn V in space. In other words, a tribute to NASA!

The Resurrection Cemetery was already famous because of Resurrection Mary, the area’s most famous ghost. According to the legend, Mary had spent an evening dancing with a boy at a nearby ballroom. At some point they argued and Mary left, walking away up the street. After just a few meters, a hit-and-run driver killed her. He fled the scene leaving Mary to die. Her parents found her and buried her body in the Resurrection Cemetery, wearing her dancing dress and shoes. Now she appears to drivers in the area, asking to be accompanied to the Cemetery.

Since the realization of the beautiful Mausoleum the city has a new object of interest. And perhaps Mary is finally less bothered…

The Most Iconic Ones: French Gothic Windows from Paris…

The stunning religious complex of the Sainte-Chapelle, in the heart of Paris since the mid-13th century, has 15-meter-tall walls completely covered in colorful glass. These 15 fully-detailed windows are decorative but, as the majority of Medieval artifacts, are also educative in many senses. They illustrate more than 1,100 biblical episodes as well as local history and political figures. For example, people can see King Louis IX (also known as Saint Louis) bringing holy relics to the city. This is not a casual representation. King Louis was the patron of the Chapelle itself, it was intended to house precious relics for Christianity.

A few steps away, another jewel of the French Gothic art: Notre Dame de Paris. The cathedral is especially famous for its three rose windows. The most famous one is certainly the South Rose Window. Jean de Chelles and Pierre de Montreuil designed and installed it in the second half of the 13th century. This iconic window measures almost 13 meters and contains 84 panes. They are divided into four circles, as usual depicting biblical scenes and characters, from apostles to angels. A fire during spring 2019 heavily damaged the structure of Notre Dame, but fortunately not the beautiful roses.

Another French surprise is the Chartres Cathedral. Many people believe its 167 stained glass windows to be the most beautiful in the world. They are absolutely right! First of all, the whole church is a UNESCO World Heritage site. Secondly, the windows are probably the most complete group surviving from the medieval period (ca. mid-12th/early 13th century). The subjects are once again both biblical and from secular life, such as kings, queens, knights, and priests.

Probably the oldest window in the cathedral is the Blue Virgin Window, or Notre Dame de la Belle Verrière. Mary is seated on a throne with baby Jesus on her lap and she wears a crown, as queen of Christianity.

The Most Colorful Stained Glass Windows: Sagrada Familia in Barcelona

We have to fly to another country to see an even more stunning masterpiece. The Sagrada Familia is a famous Cathedral by the architect and interior designer Antoni Gaudí, in Barcelona. It contains an actual rainbow of colors brought in by abstract stained glass windows.

The artist wanted to mimic and simultaneously surpass the Gothic style, creating the atmosphere of a temple. Generally in a Gothic cathedral, the most colorful and thick pieces of glass are the highest, where sunlight can enter undisturbed. On the other hand in the lower areas, the pieces of glass are usually more transparent and less colored, since other buildings and trees help in obstructing light at this level. Thus the general atmosphere is balanced.

Gaudí wanted to do the opposite. The most transparent windows are at the top, allowing light to widely illuminate the mosaics in the nave. Illustrations and texts are in the lower panels, to be easily read. With this trick, the architect created an effect of maximum contrast.

This beautiful place still hides something to fascinate everyone of us. Around the time of the winter solstice (December 21st), at sunset the rays are practically horizontal. They can easily enter into the nave of the Sagrada Familia almost perpendicular to the windows and, going through the warm colors of the panels, they illuminate the nave with the reds of the sunset. It gives the feeling of being in front of a warm, comfortable room with a fireplace. We are on fire, too!

The Most Geometric Ones: Frank Lloyd Wright’s Windows

In modern times, as predictable, stained glass windows also fascinated the world of architecture and design. The famous American architect Frank Lloyd Wright conceived the design of a home as a unit, including the building as well as its windows. Therefore, he tried to recreate architecture through the wise use of abstract geometric patterns on glass panels. He largely used clear glass with touches of color. Moreover, each design was unique to each building for which it was created. There were plenty of sources of inspiration for the artist, but the main ones were probably Japanese prints, with clear black lines and large colored areas.

The Most Time-Dependent Ones: Nasir al-Mulk Mosque

Islamic art could not resist the magical atmosphere of stained glass windows. In Shiraz, southern Iran, we can enter the incredible Nasir al-Mulk Mosque.

Its construction began in 1876 and ended in 1888, by the request of Mira Hassan Ali Nasir Al Mulk. He was an aristocrat of an Iranian family who wanted a prestigious tomb for his father. The architects created a spell; Intricate stained and colorful glass, illustrating traditional elements and designs, compose the façade together with many arabesque arches. The real spell is inside, where you can find thousands of painted pink tiles on the ceiling and woven Persian carpets on the floor. At dawn, the morning light shines through the panes and illuminates the whole space with vivid rainbow shades, mostly reflecting the pink on the ceiling. That’s why the mosque has a nickname: “The Pink Mosque”. It will leave every morning-lover totally speechless!

In the United Kingdom, there is a pearl for lovers of stained glass windows: the Stained Glass Museum. Here you can find what is probably among the most powerful glass panels of our days. It is Saint Adelaide by Kehinde Wiley, a 2.5-meter-tall stained glass portrait of a young Black man. The subject replaces the traditional figure of the white saint represented in Western religious artworks.

The artist is famous for such very topical representations of Black subjects, placed as the main characters of religious, mythical, or historical scenes of the traditional Western canon. He also loves stained glass windows. Therefore, here they are his powerful readapted glass panels like Saint Adelaide. Wiley mimicked a known Ingres’ artwork, but instead of Saint Adelaide, a woman and canonized Roman Empress, he represented a young Black man in jeans and sneakers.

What a message, Mr. Wiley!