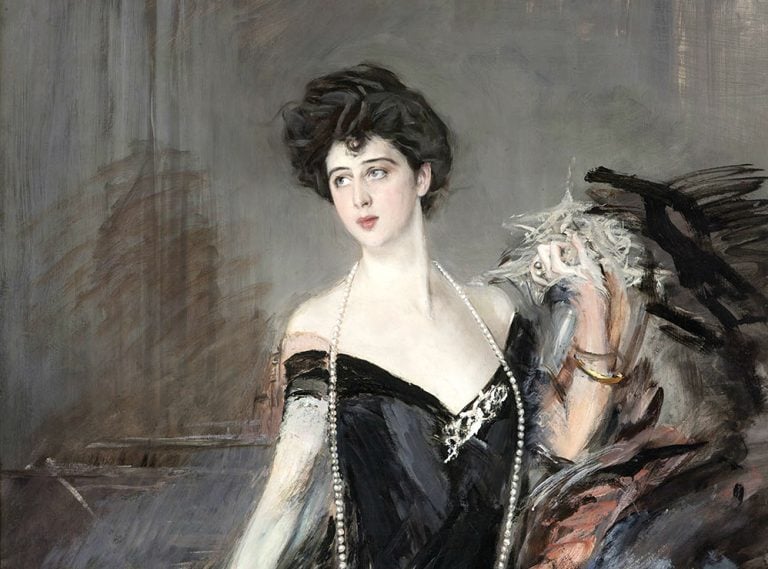 The history of the Belle Époque reveals many scandalous stories. Behind the elegant portraits interesting lives of grand dames and adventurous gentlemen are hidden. Drawing inspiration from the article about John Singer Sargent’s Madame X, I decided to tell you about another major artist from that time. We are pleased to introduce to you Giovanni Boldini, aka the Master of Swish and his beautiful sitter, Franca Florio.

Giovanni Boldini was an Italian artist who lived between 1842 and 1931. His father was a painter of religious subjects in Ferrara (north-central Italy). He ensured that his promising son was classically trained in Florence. One of the boy’s first pieces is a self-portrait from 1856, when he was just 14 years old.

One surely needs time to let their own style emerge and you’ll notice there is none of his later swishing style here. The influence of his classic schooling in this early work is shown through the chiaroscuro, meaning the bold use of light-dark contrast. It bares little resemblance to the work he later went on to produce. However, please don’t get me wrong, this oil-on-canvas represents a remarkable achievement for such a young boy. I couldn’t have painted my face that well however much I tried!

Soon enough, the budding artist steered away from his studies and found himself more interested in other things. He liked the immediacy of the Macchiaioli group’s “light and shadow” technique and their use of realism, so he produced a good number of landscape drawings and paintings in this style. Nevertheless, the countryside with its sheaves of straw drying in the sun and its drowsy cattle did not transfix Boldini quite as much.

Since the dawn of his artistic journey, Boldini showed a predilection for portraiture and this bonded well with his natural flare for networking. Florence opened its doors to him and he was invited to the mansions of nobles, socialites and people of interest.

Boldini traveled relentlessly. He lived in London and Paris which gave him the chance to meet other artists from the international scene, like, Edgar Degas and John Singer Sargent. The European Belle Époque was shining in all its splendor while he feverishly produced portraits of the famous and well-born.

The Italian painter met John Singer Sargent in Paris in 1880. The two men bonded and drew artistic inspiration from one another. In fact, they shared more than just their first name (Italian lesson number one: Giovanni translates into John). We’ll reveal a few of their liaisons later!

Portrait of Franca Florio is an oil-on-canvas painted by the Italian artist in 1901, last edited in 1924.

Franca Florio, born Francesca Paola Jacona della Motta dei baroni di San Giuliano, was the daughter of a bankrupt Palermitan noble family, who married into bourgeois money. A true socialite, very well known within the decadent Sicilian society for her extravagant life. So much so, that she was dubbed the Queen of Palermo. She was also acclaimed internationally, for her charm and fortune. Her beloved yachts took her to parties all over the Mediterranean sea.

The commissioner of this magnetic, and highly complementary portrait was Franca’s husband, Ignazio Florio Jr. He was no less subject to public attention than his wife. He loved a good life and unfortunately often cheated on her. It is said that the pearl necklace Franca is wearing in this painting is a gift from him. A token of apology for being so incredibly unfaithful. It has 365 beads, one for every day of the year.

The original painting looked more or less as we see it today, apart from some fabric that covered Florio’s arms. Ignazio ordered Boldini to paint this in, as naked flesh was regarded as indecent. After the ownership of the portrait changed in 1924, Florio’s arms resurfaced in all their dynamic and pale glory, at the hands of Boldini himself.

In 1884, a scandal hit Boldini’s friend and the lady in the portrait Madame X. Her name was Virginie Gautreau and she was a very desirable woman, who looked for adventures, despite being married. In a nutshell: John Singer Sargent’s “mistake” was to paint a dress strap hanging off her shoulder with too much liberty. Similar to Florio’s arms, the showing of too much epidermal radiance was deemed indecorous.

Urged by raging public disdain, incremented by the popularity of the lady, the American painter fixed the detail by securing the strap in place, as we see it today. Sadly, it was by then too late and both the artist and Gautreau’s reputations were ruined. When Sargent fled Paris to return to England, he left his Parisian study to Boldini.

Boldini’s peculiar brushstrokes are the stylistic elements that make Portrait of Madame X and Portrait of Franca Florio more dissimilar than alike. Moreover, Boldini’s figure does not possess the statuary poise; the sharpness of profile; or the stillness that Sargent infused in Gautreau’s portrait. Also, the background is not as dense, bare and dramatic as the one behind Madame X. In fact, Franca Florio seems to be hit by swirls of wind. It swishes around her, spreading color, shapes, fabric and material, and filling up the otherwise empty space.

On the contrary, the composition of the scene is very similar. The women are alone with their lunar pallor, standing out against the pitch black of the fabric. The intimacy of the captured moment, the ladies’ elegance and sensuality, the unforgiving world that they embody, all unify the subjects.

Giovanni Boldini’s style turned out to be very specific and personal, unharnessed by any main artistic movement. Dashing and vibrant realism portrays the high society the artist became a member and a spectator of. Wedged in between the immediacy of the Impressionists and the dynamism of the Futurists. The bodies and the backgrounds are painted with swishing, long strokes. So long, dancing and whooshing that in 1933, Time magazine, dubbed Boldini the Master of Swish.

Boldini aimed to capture the soul of his subjects, although they belonged to a world that was renowned for being empty and vacant. He played along with them, painting eloquent glances and crystallizing their moving bodies in a series of captivating and exciting images.

Boldini’s figures are so smooth and delicate, so fashionably dressed, they fizz with malice and beauty. His nickname from Time magazine, as the Master of Swish is well and truly deserved.