Are You A Conoisseur Of Male Beauty? A Nude Invasion! 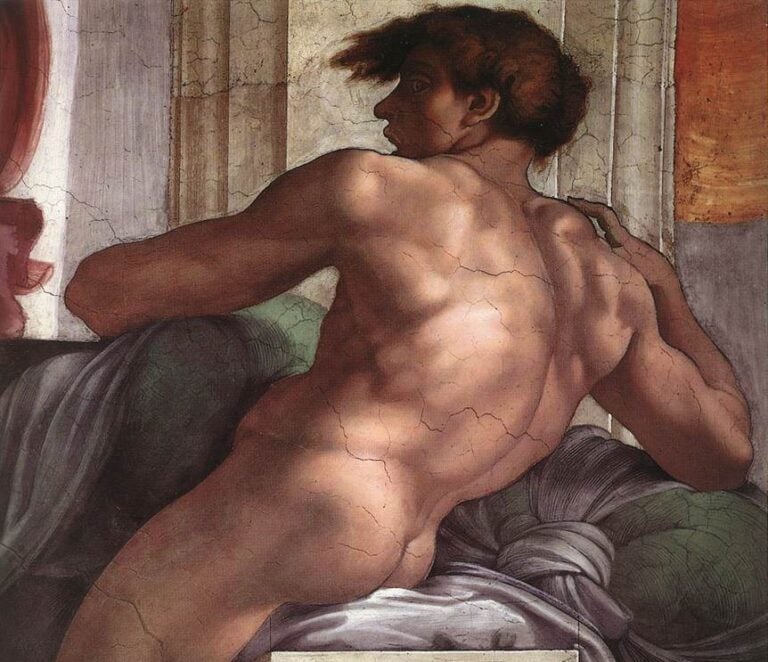 As I wrote once in my post about naked bodies in Academicism, art history had for centuries glorified male beauty and had somehow neglected or underestimated the female one.

Everything changed in the 19th century, when the prudish conventions of the ‘restrained’ and civilized Western societies did not accept the male nude to be present in public space. Why? It probably had a lot to do with the ideas of male supremacy and power, as well as religious interpretations of nudity as something dirty and immodest. The male nude became constraint to anatomy studies or sketches for private leisure and the female nude lived its glory in the representations of odalisques, harems, mythical nymphs and other seductive creatures…

But, let’s get back to the old good times when the male beauty was in the spotlight, shan’t we?

Fauno Barberini or Drunken Satyr ( faun was a Roman equivalent to a Greek satyr, creature which attended Dionysus) is one of the gems of the Glypthotek. His sensual pose and his facial expression just speak for themselves. No wonder why Ludwig I of Bavaria wanted him for his new museum of sculpture in Munich.

Is Renaissance art so popular because it strips again all those fantastic bodies?! I leave you to meditate over this question and this time I’m not showing you my favourite man on this planet, as he had his own post (if you need more male nudes, have a look there).  This time is the 5 minutes of fame for the fabulously seductive ignudo (e.i. nude man) from the Sistine Chapel. There are 20 of them out there and I feel like I’m going to dedicate them a whole post very soon…

Aaaaah, Caravaggio and his genius brush! But where did he take all these young boys to model for him from?! (I’m not implying anything, especially the alleged homosexuality of our master…). I picked this young John the Baptist because I didn’t want to be so explicit with Amor Vincit Omnia (google for yourselves), and this playful smile just always wins me over.

Come and party with me, will ya?

Time for something more sturdy for the fans of Rubens and heavy lifting. Rubens mastered the depiction of anatomy and muscles and he would search to demonstrate it on any occasion. His direct inspiration was Michelangelo, which we can see in the similar treatment of the male body which is always extremely muscular and perfectly formed, whereas the poses of the figures are planned in a way to highlight their beauty.

With David we leave the Baroque abundance and dive into the Neoclassical return to tranquility. David did not need extra sets to arrange a captivating scene: dark background which emphasizes the whiteness of the body, the red cloth which attracts the gaze to the focal elements of the composition (oh, yeah), and finally a diagonal pose which runs across the entire canvas and makes us swoon. No wonder why David had so many pupils!

Courbet, the man who liked to bring chaos into the ordered world of the prudent French, painted many controversial paintings (google The origin of the world and you’ll know what I mean) which however revolved around female bodies. This painting is rather unusual for him as it does not allude to any social issues which Courbet referred to usually in his works. I guess he must have been under a strong impression of these wrestlers, and so am I.

Although, funnily enough, Victorian culture approved of men bathing naked, Eakins was the first to include nudity in American painting so explicitly. He exploited this to study male nudes, he was especially into buttocks, which would amount to one of his masterpieces, in which he depicted his own art students and himself (right bottom corner) bathing together. After this painting had been published, Eakins was forbidden to use his students as models by the directors of Pennsylvania Academy of the Fine Arts where he worked. Not much later, he was forced to resign on the grounds of sexual scandals which involved him and his students. Well, no more baths I guess.