David Sculptures: Bumcheeks, Hats and Other Fetishes of Florentine Artists 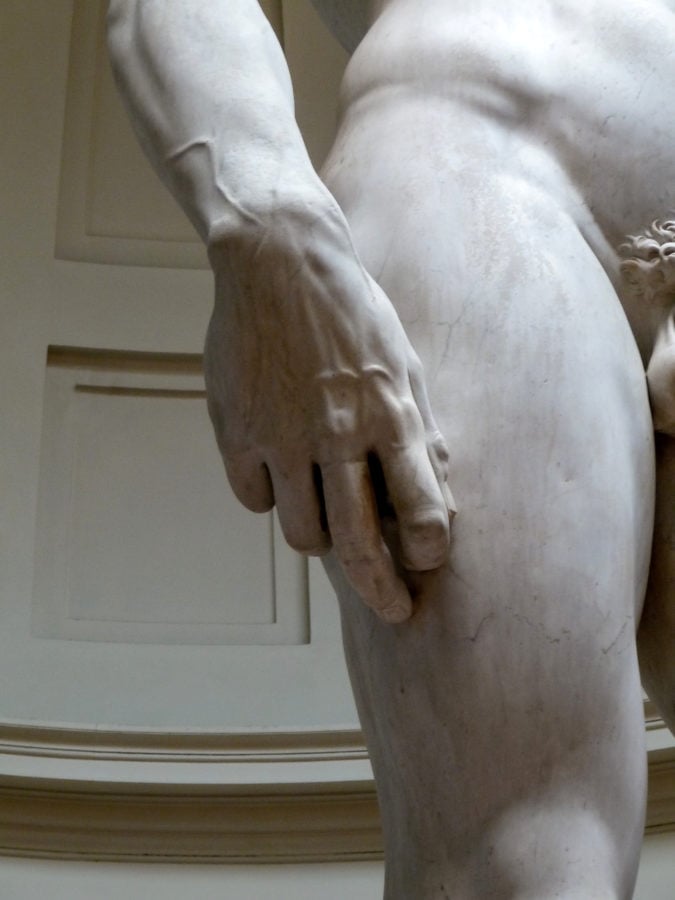 Sculpturers from Florence loved the biblical story about David, an adolescent boy who would win a duel by killing a giant Goliath using just a sling. Why? Did they just love to mould young boys’ shapes, however dirty it sounds, and the biblical story was simply an excuse to show some nudity with no bad consequences…?

Look at this shiny bronze boy. He looks so proud of himself and not at all embarrassed of his transparent armour which has a weird decoration around his nipples. Although he looks a little bit too anemic, his ribs are showing through a little bit too much. I would start worrying if I were his mother. Who allows children to play with daggers and big bearded boys?

This David looks like a young boy, too. His pose is slightly cocky with this contrapposto and the left hand on his hip. Although he seems to be pretty untouched by the fact that he has just killed a man whose head is resting by his feet. He’s also the only David who is fully clothed. This is probably why Donatello was asked to make a second sculpture, and in a more shiny material…

This is Donatello’s second take on the same subject. This David looks certainly very different and it raised a lot of controversy in its times. He was meant to stand in the court of Florence, but he was removed because, according to the spokesperson of the Signoria, his right leg was tasteless. I don’t see a problem in the leg but rather the feather from Goliath’s helmet that climbs up the right leg up to David’s groin (look closely at the photo on the right). This unsettling detail made some people guess that Donatello was a homosexual who was making a coming-out statement here. I don’t know, but what’s more unsettling to me is the awful hat he’s wearing.

This David is not anymore a mere boy. He’s a young man, full of strength and vitality. Bernini captured him just in a second before the lethal throw, in the climax of the movement. He chose this moment to be able to fully represent the tense muscles, and the sash and the pouch are here on purpose, too, as they guide your gaze right down to the loincloth which is sliding down revealing a little bit too much…Ups! (But I don’t think anybody’s sad about that?)

Michelangelo’s interpretation is not literal at all. This David does not look like a growing up boy but more like a guy who’s been to the gym quite a lot. But who cares if this is just the most ideal man that the Earth has ever seen! Look at his abs! And the way he holds the sling, revealing his perfect biceps.

Imagine that initially he was commissioned as an outdoor sculpture which would have stood on top of the Cathedral in Florence. Thankfully the commissioners had enough reason to change their minds when they saw how beautiful he was. They put him in a public square instead. In 1873 he was moved indoors into the Galleria, to preserve him from any danger. Hopefully he’ll last forever.

Ok, the true reason why Florentine sculpturers chose David so often was because David was a symbol of Florentine ruling family of the Medici. They believed that as David, a young and seemingly defenseless boy, saved his city from an attack, the Medici and thus Florence, surrounded by their enemies, would win every struggle they experienced.