The Origin of the World and the Female Gaze 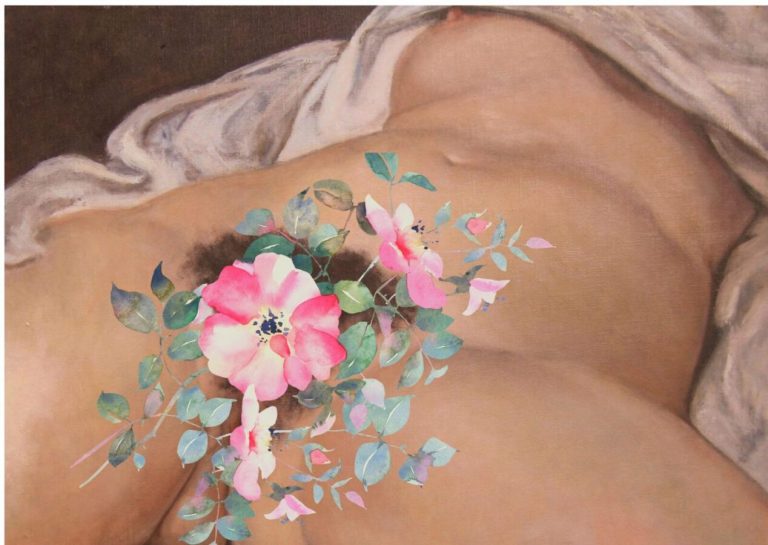 It was Shakespeare who coined the phrase, “A rose by any other name would smell as sweet”. The premise rests on the notion that the rose’s inherent beauty and olfactory prowess would remain unchanged no matter what one called it. Now imagine if the phrase were to read, “A vagina by any other name….”. The long list of fanciful catchwords for female genitalia is noticeably devoid of names that inspire the respect and awe that a woman’s external reproductive organs deserve. Pussy, snatch, garage, camel toe, and muff are just a few of the less disparaging ones.

Nonetheless, one descriptive moniker exists that elevates this part of a woman’s anatomy to the lofty domain normally occupied by Creation, Mother Nature, and the Divine, all rolled into one. L’Origine du monde (The Origin of the World) is the title bestowed upon Gustave Courbet‘s iconic 19th century painting of a woman’s vagina on permanent exhibit at the Musée d’Orsay in Paris. This unapologetic, cropped perspective of a model’s splayed thighs and bounteous pubic bush is a rude awakening for museum visitors lulled into a visual stupor by the museum’s 19th and 20th century masterpieces. However, the immediate carnal shock of Courbet’s painting is offset by its title, The Origin of the World. The image morphs before our very eyes from lewd hyperbole to an overdue homage to women for their unique role in the miracle of birth and creation.

Not everyone sees it this way, however. Ever since making its public debut at the Orsay Museum in 1997, the painting has been the subject of contentious public debate along religious, cultural, and gender divides and consistently makes the headlines. Most recently, social media giants have erroneously censored this major work of art on pornographic grounds, ending up with their tails between their legs after protracted legal battles in the French courts.

The painting was highly controversial from its inception, and for close to a century and a half the little vulvic portrait passed from one male collector to another, hidden behind curtains, faux panels, and hinged landscapes. Modern art criticism has often vilified L’Origine du monde as a symbol of the exploitative male gaze so prevalent in art history. What happens to the painting–and for that matter, the viewer herself–when subjected to an unwavering female gaze? As the first artist authorized by the Orsay Museum to copy Courbet’s controversial masterpiece in 2011, I experienced first-hand what it was like both as a woman and as an artist to gaze unfettered at this iconic painting over a period of six weeks.

Though feminist bloggers and art historians, from their perspective, passionately protest the painting’s objectification of women, I firmly believe that context is key when studying any work of art from the past. Gustave Courbet­–that famously contrarian artist and champion of the working man–painted L’Origine du monde as part of a commission for the Ottoman diplomat Khalil Bey in 1866. It was never intended for public display and although it was the first time a painter had portrayed a woman with unflinching realism, it was certainly not intended for a female audience. Previous depictions of naked women concealed the sex with a well-placed hand, a fig leaf, or a strategic fold of silk fabric. If for no other reason, I commend Monsieur Courbet’s Origin of the World for its naturalistic representation.

My copyist experience precipitated a profound journey of self-discovery and a revived admiration for the painting and the artist who painted it. The daily stares, taunts, and snickers directed towards the painting underscored society’s historically ambiguous relationship with the naked female form. While a good percentage of European museum goers expressed a tolerant fondness for L’Origine, many visitors were shocked and even disgusted by the sight. Contrary to what one might presume, the more time I spent with the painting the more empowered I felt as a woman. I found myself playing the role of protector while trying to ascertain why this 19th century painting continues to elicit such strong emotional reactions.

The discomfort caused by Courbet’s painting may in part be attributed to a theory proposed by the late art critic John Berger, who made the distinction between nude and naked. “Nudity,” he said, “is placed on display. Nakedness reveals itself.” Gustave Courbet was never interested in pandering to our finer sensibilities–he made it his mission in life to battle artifice and deception no matter the cost. He insisted that he would never paint something he could not see with his very own eyes. “Show me an angel, and I shall paint one!” he goaded his detractors. The Origin of the World is very clearly no angel, but a very real woman, just as Mother Nature intended her to be.