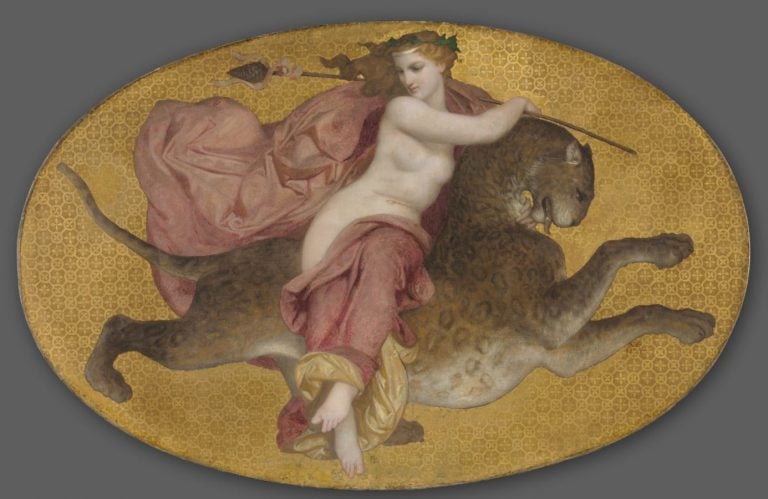 William Adolphe Bouguereau, Bacchante on a Panther, 1855, The Cleveland Museum of Art, USA.

Why Bacchus Is God of Wine? Art History Story

This Is Madness: Beyoncé and Pipilotti Rist As Maenads

One of the reasons why we find Greek mythology so fascinating is because of its incredibly diverse structure. All of the gods and goddesses have unique characteristics and, according to the ancient source material, they were often prayed to distinctively as well. Arguably Dionysus, the god of wine, had one of the interesting rite forms and his female followers or priestesses were a vital element of his retinue, which made these followers inspiration for artists. Let’s have a look at who the Maenads were and how they were portrayed in art.

Dionysus’ female followers are referred to as Maenads or Bacchantes (Bacchants in some cases). With the other followers, they constituted the thiasus, a group that was devoted to Dionysus. Maenads often carried a thyrsus, a ceremonial staff topped with a pine cone and often with a fillet attached to it. They crowned their heads with ivy wreaths or bryonies and their garments usually included fawn or leopard skin.

Ecstatic dances were a significant part of the bacchic rites that they performed and within these rites their behaviors mostly relied on instinctive and emotional reflexes instead of on reason. A break away from reality and becoming a single entity with nature’s and humanity’s wild aspects was a significant aspect of their prayer. In the ancient sources, especially in the tragedies, we often see that their transcendence gives them unparalleled courage and strength, as they do not care about the earthly consequences. Their way of worship was surreal, fitting for Dionysus whose gift to humanity was something that influences mortals’ minds. However, it is important to note that the practices within Dionysia and Bacchanalia differed from their mythological reflection in literary productions. Now let us look at how painters from different eras portrayed them!

The Death of Orpheus

The Bacchae by Euripides, along with Aeschylus’ Bassarids, which only survived in fragments, are two ancient plays in which we see Maenads as key figures within a source material. In this painting, created by French painter Émile Bin who portrayed an event in Bassarids, we see Maenads sending Orpheus to Hades in a joyful manner. The same act occurs in The Bacchae as well, where Pentheus, king of Thebes was torn apart by Maenads on Mount Cithaeron. Both characters were killed for the very same reason: disrespecting Dionysus and disregarding his sanctity. As a consequence, Maenads come forward as a violent apparatus of Dionysus to give a severe lesson to anyone who is naive enough to ignore his divinity.

In these two spectacular paintings both Bin and Lévy masterfully capture the brutal aspects of the Maenads. We see that the followers are attacking Orpheus with terrifying objects. Their confidence in this deed is purely appalling, while the despair on Orpheus’ face and his fallen lyre is very heart-rending. Besides the attackers, certain followers are chanting in cold blood while the others are playing their instruments such as the cymbals and flute. We also see Dionysus’ symbolic physical presence in both paintings. In Bin’s piece a statue of Dionysus is visible at the back, overseeing the act from a small shrine. In Lévy’s portrayal one of the Maenads on the right is carrying a wooden statue of her lord.

This painting was created by John Collier, whose works were influenced by the Pre-Rephaelites. Ancient Greek literature was a significant source of his art. He painted characters such as Circe, Clytemnestra, and the Priestess of Delphi. In this piece he carefully depicted what the ancient literary sources indicated about Maenads. Their clothing is perfectly on point. We see them with their ceremonial staffs, wreaths on their heads, and clothes made out of fawn and leopard hides. The setting is very fitting as well, for we know that they performed their rites in the wilderness, away from the cities.

Three of them are pursuing a goat, which seems like it is going to be a sacrifice to Dionysus. The fascinating thing is that instead of an expression of fear, we see a mischievous smile on the goat’s face. The Maenad in the middle is holding two serpents in her hands. One may interpret this as a healthy and long life that Dionysus provides for his followers. In the back, one of the Maenads is holding the leash of two leopards, the sacred animal of Dionysus. It symbolizes strength, beauty, and mystery, which are the main elements of Dionysus’ cult. In the back we also see a follower who has fallen on the ground, probably drunk, and is being helped up by other Maenads. Meanwhile the rest of the group is following them with their wine cups and dancing along the way.

When it comes to Bouguereau and his way of rendering a female body, there is no doubt that a viewer will be fascinated every time they observe his work. The warmth of the subjects’ skin and the realism of the proportions and refined details are just splendid. It is a painting that expresses erotic playfulness, which is one of the elements of the Maenads that artists like to put a spotlight on. What we see is an interaction between a follower and the wild. This reoccurring concept implies that the core of the Dionysian principles clash with the ordinariness of what is civilized and accustomed to. The Maenad’s mischievous facial expression and the relaxed state of her body point out her happiness. Lastly, we also see a form of physical strength that Dionysus grants to his priestesses. In the end, who can truly control a rushing adult goat with a single hand while remaining totally unflustered, without the support of Dionysus?

Just like Bouguereau, Gérôme’s works were greatly influenced by antiquity and mythology. In this painting we see something unconventional. The Maenad has horns, but she cannot be a satyr because satyrs are exclusively male according to the ancient literary tradition. Michelangelo was one of the first artists who depicted a satyress in his work, Children’s Bacchanal in the 16th century. However, Gérôme’s approach was even more avant-garde as he combined the features of two different beings rather than a mere gender swap. Additionally, Gérôme also brilliantly fused two different historical eras through the Maenad’s clothing. She wears a white dress that chronologically belongs to the 19th century that Gérôme lived in. Meanwhile we see a hide of an animal on her back, presumably a deer’s, which represents the ancient customary garment. The last aspect that should be observed is the subject’s mood. Contrary to the typical emotional state of the Maenads, Gérôme’s portrayal seems very thoughtful and sad. What might be the reason for that? Let me know if you find out, dear reader!