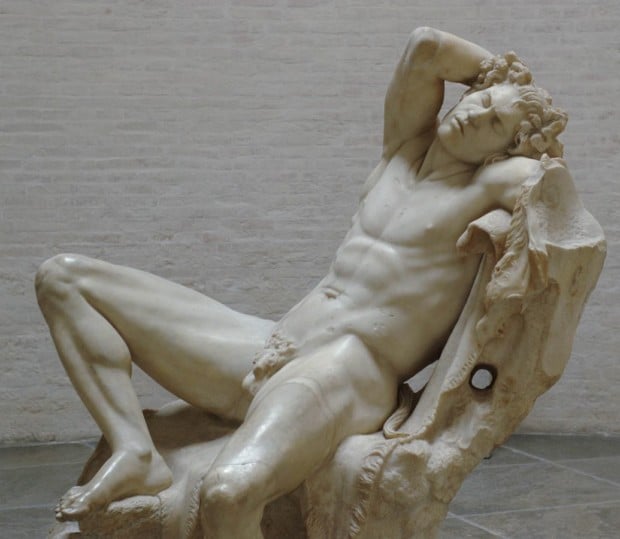 Drunk, sleeping men are rarely, if ever, beautiful and sexually appealing, but this is not the case with this really sexy faun from ancient Greece. This monumental statue, today kept in Munich, is not only intriguing for its aesthetics, but also for its obscure origins, stormy history, and baffling iconography.

At the first glance, the sculpture presents a muscular man, sleeping on a rock in a very provocative position. He is in his prime, with a beautiful body, captivating face, and irresistible sexuality. After a closer look, we can identify the figure as a faun or satyr by a discreet tail on the left side of his body, and ivy and grapes entangled in his wavy hair. Also, a flashy pose with exposed genitals in which the Barberini Faun was depicted, is often attributed to fauns and their animal nature, as creatures free from human social conventions and restrictions.

Fauns and satyrs were mythical creatures, half human half beast, best known as companions of the Greek god of wine – Dionysus, and participants in his parties. Very often they were shown as comical characters with distinct animal features such as tails, pointy ears, or sometimes horse legs. They often struck acrobatic poses or were found chasing terrified females in pursuit of sexual attention. It was not common to present fauns as solitary and fully asleep figures.

The Barberini Faun is sometimes named Drunken Satyr, highlighting the feature that was often associated with this character. The right hand bent over the head has been associated in the iconography of ancient art as a gesture of being asleep after exhausting activities like fights, exercise, or heavy drinking. This passive role was quite unique for fauns, as they were usually depicted as dynamic creatures, and even when drunk they remained active. A frequent sexual aggressor was shown here in a vulnerable and passive situation.

What also singles out the Barberini Faun from other ancient presentations of his character is its monumental size, almost human physiognomy, heroic body, and a unique scene presenting a solitary faun, who drunkenly fell asleep on the rock. The posture itself also combines contrasting qualities, relaxation and tension. Even asleep the body shows edginess, restlessness – parted lips, tense facial muscles, a slight angle between legs and torso, and a distinctive curve in the upper body. All these unique features may indicate this statue was dedicated not to an ordinary faun, but to a mythical character. One of the theories points to a faun (satyr), who was traitorously intoxicated and captured by King Midas in one of the ancient myths.

The exceptional features of this sculpture deviate from the iconography of the classical period and indicate the Hellenistic period as the time of its origin. It hasn’t been established if the Barberini Faun is an original Greek sculpture or Roman copy.

The statue was found without legs or a left arm in the moat of the Castel Sant’ Angelo (formerly Mausoleum of Emperor Hadrian) in Rome during its renovation in 1620.  In 1628, it was added to the collection of the Barberini family, who owned it with a few gaps until 1814, when the statue was sold to Prince Ludwig of Bavaria. After many difficulties caused by Italian officials who tried to block the statue from leaving Italy, in 1820 the Faun was moved to Germany and installed in the Glyptothek in Munich. Where it remains to this day.