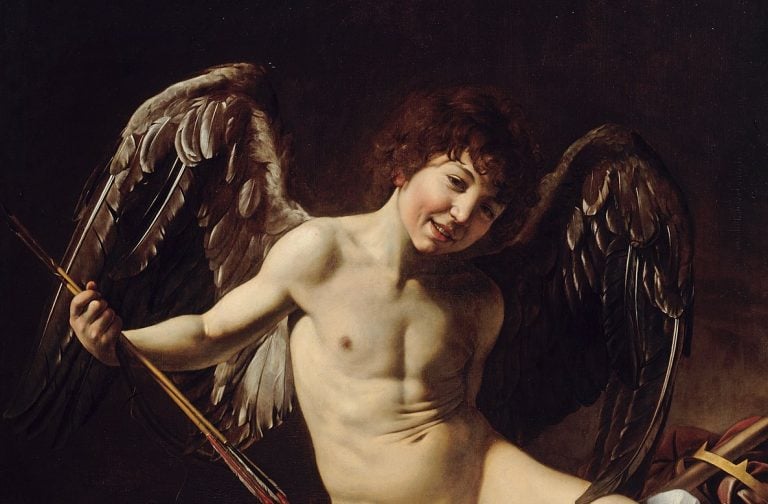 Virgil’s famous saying amor vincit omnia means “love conquers all.” Famous Baroque painter, Caravaggio, clearly inspired by the famous sentence painted this young and reckless Cupid. He triumphs over science, music, fame and power – all these symbols are scattered at his feet. The boy has eagle wings and is captured in motion, as if sitting down or climbing down from a table covered in cloth. This daring depiction is one of the highlights of the Gemäldegalerie collection and you can visit it in Berlin.

Cupid’s position indicates a homoerotic note of the painting. His legs are spread, so that his genitals are exposed almost in the center of the composition. There is a striking resemblance to Michelangelo’s The Genius of Victory, which is now at the Palazzo Vecchio in Florence. The subject was common for the age. Naked boys could be seen on any riverbank or seashore, and the eroticization of children is very much a cultural artifact of the present-day rather than that of Caravaggio’s.

Caravaggio painted directly from a live model. The painter Orazio Gentileschi, whom you might know as the father of Artemisia Gentileschi, lent Caravaggio the props (such as wings) to use in the painting. This allows the scholars to precisely date the work.

The painting proved to be a great success among Rome’s gentiluomini and litterati. Interesting fact is that it was not initially entitled Amor Vincit Omnia. The Virgilian sentence was first linked to the painting by the critic Giovanni Pietro Bellori, who mentioned the work in his biography of Caravaggio from 1672.