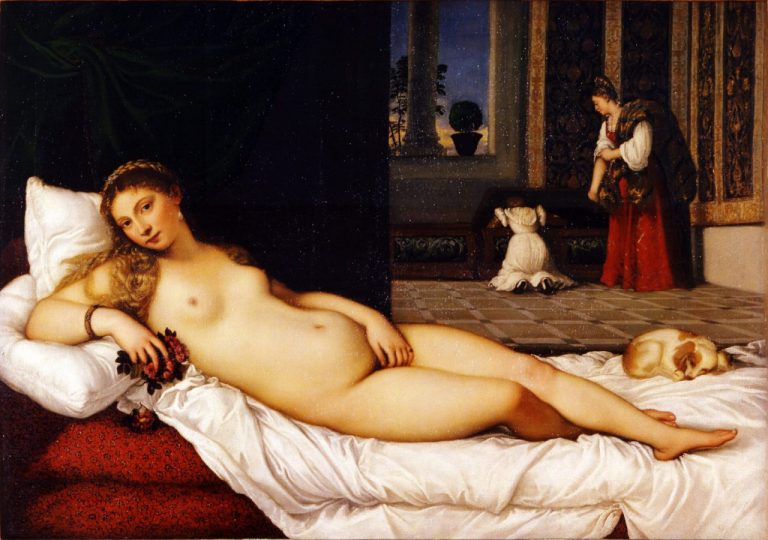 Titian (Tiziano Vecellio, 1490–1576) was an Italian painter active in Venice in the 16th century. He is considered the greatest painter in the Venetian art school. During his long career, he painted a variety of subjects, shaping Renaissance art in the Italian north. Here are 10 things you should know about him!

1. We are not sure when Titian was born

Titian was born in the small town of Pieve di Cadore. There are no documents marking his exact date of birth, but researchers believe he was born around 1490. His father served in the military and his grandfather was a notary. Around the age of 10 young Titian and his brother, Francesco, were send to an uncle in Venice to find apprenticeships as painters. While Francesco never reached the status of his brother, he managed to have modest fame as a painter.

Titian apprenticed under Giovanni Bellini, one of the most prominent painters in Venice, who came from a well-established family of painters. In Bellini’s studio, Titian became friendly with a group of young colleagues, among them Giorgione, who had the most lasting impact on Titian’s early style. In fact, their styles were so similar that the painting Pastoral Concert, which is now attributed to Titian, was previously thought to be by Giorgione. Together they combined Bellini’s ground-breaking use of color and light with a new tonal approach. Giorgione’s untimely death in 1510 left Titian without a rival among his generation.

3. Titian mastered the use of color

If one thing is to be said about Titian’s art it is his mastery of color. While in Tuscany painters relied more on design, producing structured and clean-cut works, in Venice Titian developed a style throughout his career that relied more on the free flow of color, imbuing his works with emotion and atmosphere. This is especially evident in one of his late works, the Venus with a Mirror. The composition is quite simple. However, by applying tone after tone of color, the texture of the flesh, the fur and the jewels seem real to the touch. Venus’s voluptuous curves are shaped with carefully placed but free-flowing brushstrokes.

4. Titian was the first painter to have a mainly international clientele

Throughout his long career, Titan worked for Italian dukes, the King of Spain and even the papacy. He was the official painter in the court of Holy Roman Emperor Charles V, who wished to be painted by no other artist. His appointment as official court painter continued during the reign of Charles’ son Phillip II.

5. Titian was a master of portraits

Titian’s international fame grew mainly through portraiture. Among many, he painted the likeness of emperors and popes. For example, the Equestrian portrait of Holy Roman Emperor Charles V or that of Italian polymath Jacobo Strada. Titian was able to capture the importance and status of his sitters while also adding a psychological dimension, something that was new at the time.

Titian cemented his fame in Venice by accepting his first public commission for the high altar of Santa Maria Gloriosa dei Frari in 1516. The Assumption of the Virgin, or Assunta, is still in its original place in the church and is the largest altarpiece in the city. This huge painting measures 7 meters (22.9 feet) in height. The composition is arranged in three distinctive parts: we begin at the lowest part were the apostles stare in awe at the sky; in the middle part, the Virgin slowly rises into the sky in a dynamic contrapposto pose; at the top, she is welcomed by the Father and his angels.

The fame of the Assunta left Venice and reached the ears of the Duke of Ferara Alfonso d’Este. D’Este wanted to decorate his private study, the Camerino d’Alabastro, with mythological subjects. Titian created three paintings for the duke: the most famous among them is Bacchus and Ariadne.

According to the myth, Theseus abandoned Ariadne sleeping on the island of Naxos. The painting shows the moment when the young woman meets Bacchus, the Greek god of wine. She has just woken up and, realizing her state, tries to catch the attention of the fleeing ship. At the same time, she hears music and turns to see Bacchus and his merry band of followers. Even though Bacchus and Ariadne are not positioned in the center of the composition, they catch the viewer’s attention because of Titian’s mastery in colorizing. The trick here is the use of complimentary colors in their clothing. Complementary colors are colors that when put side by side create the most contrast; in this case look at the blue robe of Ariadne next to the red one of Bacchus. Moreover, Bacchus’ followers are painted with more earthy, somber tones.

Without a doubt, Titian’s most famous painting is the Venus of Urbino. It was a commission of the Duke of Urbino, Guidobaldo della Rovere, on the occasion of his marriage to Giuliana Varano. Even if it is widely known today as a Venus there are not any elements on the painting to recognize her as the goddess of love. Titian himself, in a letter to della Rovere, referred to her as “the naked lady”.

The Venus of Urbino became the inspiration for Goya’s Naked Maja and also Manet’s Olympia.

The term Poesie refers to a cycle of seven paintings Titian made for Prince Phillip, later Philip II of Spain. The subject of the paintings was mythological, taken from Ovid’s Metamorphoses and other classical works. Titian was able to choose the stories he wanted to depict. He called them Poesie because he envisioned them as visual poetry. The series consists of Danae, Venus and Adonis, Perseus and Andromeda, Diana and Actaeon, Diana and Callisto, The Rape of Europa and The Death of Actaeon.

Titian maintained his studio in Venice well into his eighties. Since the Greek island of Crete was part of the Republic of Venice, the city was the next natural step for young painter Domenikos Theotocopoulos, later known as El Greco. Even though not much is known about his stay in Venice, in a letter of his friend Guilio Clovio it is stated that he was a disciple of Titian.